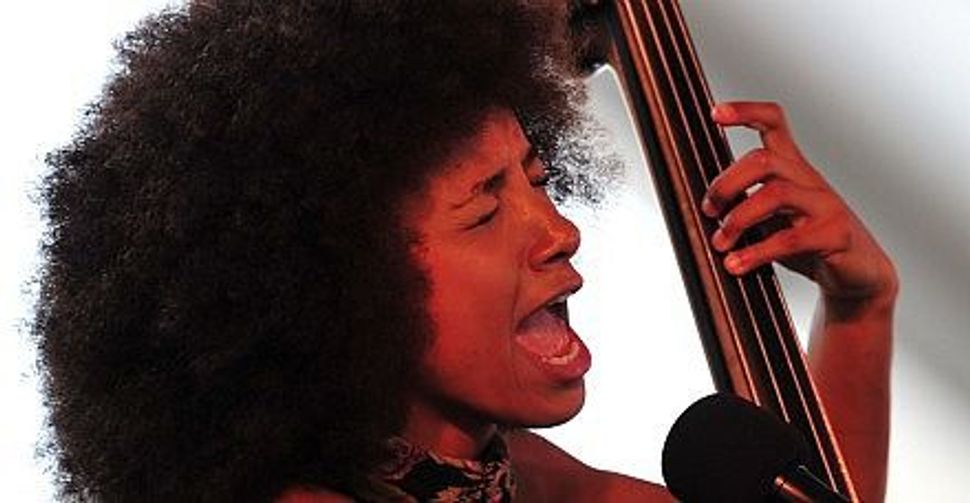 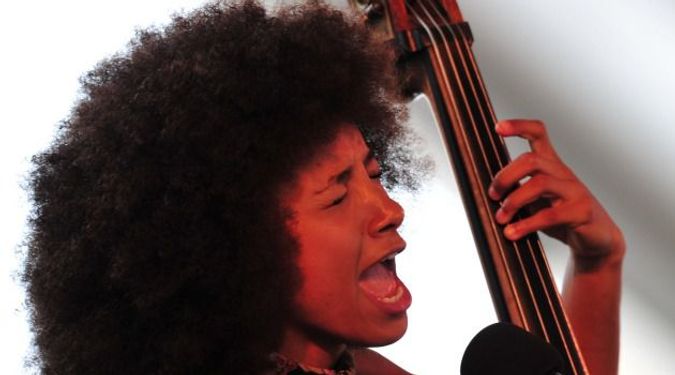 Sharing Shprintze: Grammy-winner Esperanza Spalding burst on to the music scene. But her evocative first name goes back centuries and was transported to Eastern Europe, where it became Sphrintze in Yiddish. Image by getty images

“The outcome of a dispute between me and my wife was: ‘Let’s ask Philologos.’ In Sholem Aleichem’s ‘Tevye the Milkman,’ one of Tevye’s daughters is named Shprintze — a name my wife claimed derived from Latin or Spanish Esperanza, meaning ‘hope.’ I said that there are no Latin- or Spanish-related names in Ashkenazi Yiddish. She responded that there must have been some overlap between Ladino and Yiddish. Is she right, and have Yiddish names and words been borrowed from Spanish or Latin?”

She is indeed. Shprintze does come from esperanza, a medieval Spanish form of Latin sperata, “hope,” and a common Spanish name. The best-known Esperanza in Jewish history is probably Esperanza Malchi, who died — or, more precisely, was murdered — in 1600 in Istanbul. (Istanbul’s Jews, like those elsewhere in the Ottoman Empire, were Ladino speakers.) Malchi was what was known in Ottoman court circles as a kira or kiera, a financial agent for women in the Sultan’s harem, some of whom, though denied all contact with men, managed to amass great wealth. As the agent of Safiye, a former slave who was a consort of Sultan Murad III (reigned 1574–1595) and the mother of Murad’s son, Sultan Mehmed III (reigned 1595–1603), Esperanza became wealthy herself. She engaged in palace intrigues and was killed in a revolt of the imperial cavalry — which, angered by a currency devaluation that lowered the value of its pay, accused her of being one of the financial minds behind it.

The name Esperanza was brought to Eastern Europe by Ladino-speaking Jews from the Ottoman Empire and eventually became Yiddish Shprintze. Yet this was not the only route by which Latin-based first names traveled to Yiddish-speaking areas. Some came from Western Europe, like the Yiddish name Bunim, which has been traced to either French bon homme, “good man,” or bon nom, “good name.” There is something to be said for each of these derivations. Bonhomme is a family name in France to this day and goes back to the Middle Ages (it turns up in England as Bonham as early as 1327); bon nom, on the other hand, could be a translation of the Hebrew name Shemtov, which reached southern France from Spain, as in the family of the 13th-century Provençal philosopher Shem-Tov ibn Falaquera. And if Bunim comes from bon nom, it is actually a translation of a translation, since Shemtov is a Hebraization of the Greek name Kalonymos, which appears in the Talmud, surfaces again in eighth-century Italy, belonged to a renowned Jewish family in the medieval Rhineland and eventually became the Eastern European Kalman.

It can get even more complicated than that. Take the Yiddish name Fayvush or Fayvl. Since there is no apparent Hebrew, Germanic, or Slavic source for it, scholars have looked for a Romance provenance and come up with two possibilities. One is the Greek phoebus, a word, meaning “bright” or “shining,” used by the ancient Greeks as an epithet for the god Apollo. Although nothing like it can be found in ancient Jewry, we come across it in the 17th century, when well-known Polish rabbi Shmuel ben Uri Shraga Faybish (or Fayvush) spelled his name “Phoebus” in Latin characters, as did his descendants. Further strengthening the case for it is the frequent Eastern European combination Shraga-Fayvush (or Fayvl), since shraga means “light” in the Aramaic of the Talmud. Jews often gave children double names, joining Hebrew-Aramaic ones to parallel ones in the local language, and Shraga-Fayvush might be the Yiddish form of an earlier Mediterranean Jewish doublet that has been lost. The Hebrew name Uri, it should be pointed out, comes from or, which means “light,” too.

Yet an alternate theory holds that Fayvush-Fayvl descends from Latin vivus, “living,” which we also find translated into Hebrew as Hayyim, and that the spelling of “Phoebus” is a 17th-century affectation. A Jewish family called Vives can be found in 12th-century Barcelona, and the name existed among other Spanish Jews. And for that matter, why not consider the possibility that Fayvush/Fayvl comes from the Roman name Fabius or its Italian form, Fabio?

There are still other Latinate names that Jews took with them to Eastern Europe when migrating there, though the migration route itself may not always be clear. The Eastern European man’s name Shneur, for instance, may come from either French seigneur or Ladino sinyor, “gentleman” or “master”; the woman’s name Beyle from French belle or Italian bella, “beautiful”; Yiddish Yente from Italian gentile, “kind” or “courteous.” (Both Bella and Gentilla are names in their own right.) Mendl, though it has been explained as a diminutive of Hebrew Menachem, is more likely to come from Spanish Mendes, which goes back to the Visigothic name Mendo; the Eastern European woman’s name Minde probably does, too. And there are more examples that space prohibits citing.

I hope the Horwitzes’ marriage survives all this.