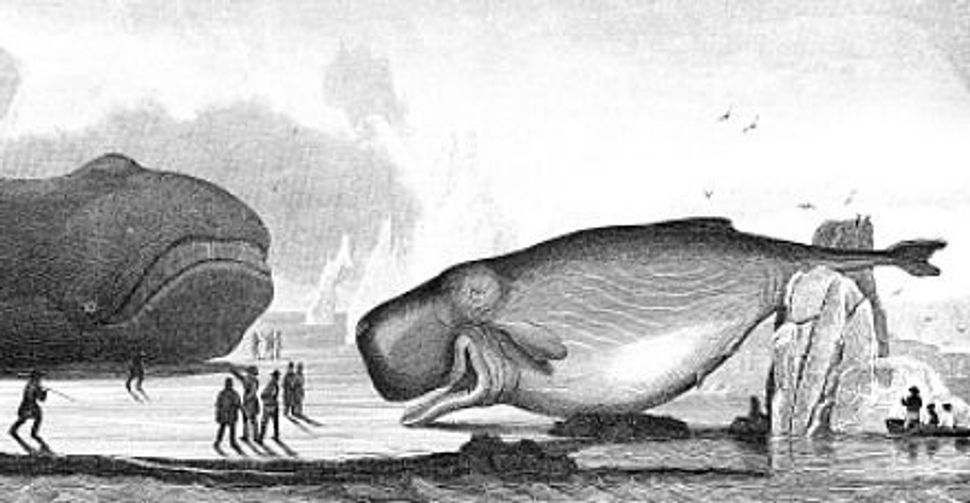 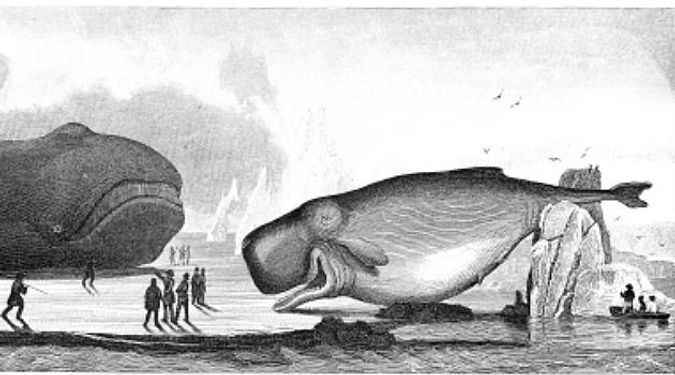 Whale of a Column: It all started when Philologos found himself stuck in the house and decided to read an old edition of ?Moby Dick.? Image by istock

Last week’s column was about the Hebrew word tanakh, spelled with the letters taf, nun and kaf. This week, we’re down to taf and nun, which spell — but I’d better begin at the beginning. It all started with an attack of bursitis in my leg.

What do you do when you have to rest your leg for a few days? You pick the biggest, fattest book you’ve wanted to reread for the longest time, and go to bed with it. I picked “Moby Dick.”

Herman Melville’s novel about the megalomaniacal Captain Ahab’s pursuit of a great white whale is more than 800 pages long, but I didn’t have to read them all to realize not only that “Moby Dick” was indeed the extraordinary feat of writing that I remembered, but also that it contained a minor but amusing linguistic comedy of errors. A single page was enough to realize that, because “Moby Dick” begins with a list of words for “whale” in different languages, such as Hebrew, Greek, Latin, Anglo-Saxon, Danish, Dutch, etc., and the Hebrew word in my Modern Library edition of the novel (how many of you still remember that wonderfully low-priced, handsomely printed-and-bound series of the world’s classics?) was הך — that is, hakh or hekh, spelled heh-kaf. This was puzzling, because no such noun exists in the Hebrew language, in which the word for a whale is livyatan, the source of our English “leviathan.” Was I looking at a curious misprint I hadn’t noticed when I read “Moby Dick” 50 years ago?

Well, you can find studies of almost anything these days, and it didn’t take me long to dig up several of them dealing with this issue. From them I learned that although הך was indeed a misprint, it couldn’t be blamed on the Modern Library, which had copied it from older editions. Although in the original 1851 edition of “Moby Dick” the word appeared as חן, ḥet-nun, it was subsequently garbled into הך by printers who knew no Hebrew, the ḥet being easily confused with a heh, and the final nun with a final kaf.

Yet this doesn’t solve the problem one bit, because ḥen doesn’t mean “whale” in Hebrew, either. It’s a word, found frequently in the Bible, meaning “charm,” “grace” or “favor,” as in the expression limtso ḥen, “to find favor” in someone’s eyes. That’s why the scholarly 1988 Northwestern-Newberry edition of “Moby Dick” changed it to תן, taf-nun or tan, under the supposition that the latter was the word Melville had in mind. Not knowing — so the theory goes — much more Hebrew than the printers, he unwittingly changed the taf of tan to the ḥet of ḥen, there being a close resemblance between these two letters, too.

But tan, the Hebraists among you will object, means “jackal,” not “whale”! So it does, going back to the Bible again. Yet there is another ancient word, tanin, that denotes a crocodile in modern Hebrew and whose biblical meaning, though uncertain, is clearly that of some sort of large sea creature; we find it in the plural, for example, in the book of Genesis, which tells us that, on the fifth day of Creation, “God created the great taninim and every living creature… which the waters brought forth abundantly.” The King James Version, following the Latin Vulgate and the Greek Septuagint, renders taninim as “whales,” and it was almost certainly this that Melville had in mind.

But why then, you ask, would the list of whale words at the beginning of “Moby Dick” have had tan instead of tanin? Aha! Because of yet another mistake. Melville, apparently, found this definition of tan in The Biblical Cyclopaedia of the English scholar James Kitto, the standard biblical reference work of the age. Kitto, it seems, was thinking of the verse in Ezekiel that declares, again in the KJV: “Son of man, take up a lamentation for Pharaoh king of Egypt and say unto him: ‘Thou art like a young lion of the nations, and thou art as a whale [tanim] in the seas.’” Spelled here with a final mem, the sign of the Hebrew masculine plural, rather than with the final nun that it has elsewhere, Ezekiel’s tanim was erroneously interpreted by Kitto as the plural form of tan, even though it is almost certainly a mistake in its own right, an ancient scribal error.

That’s a lot of mistakes — unless you wish to assume, as does Melville scholar Neal Schleifer in a 1994 article, that Melville knew more Hebrew than he’s been given credit for and was purposefully punning on the word ḥen in the sense of “grace” because Moby Dick, the great white whale, stands in the novel for the grace of God. And can it be a coincidence, Schleifer asks, that Captain Ahab’s ship is called the Pequod and that the Hebrew verb pakod occurs in the verse in Isaiah, “In that day the Lord with his sore and great and strong sword shall punish [yifkod] leviathan… and he shall slay the dragon that is in the sea”?

Can it be a coincidence that the leg with bursitis is my left one, the very same leg that Captain Ahab lost to Moby Dick, whom he now chases tirelessly around the world?