Jews, the Left and the Rest 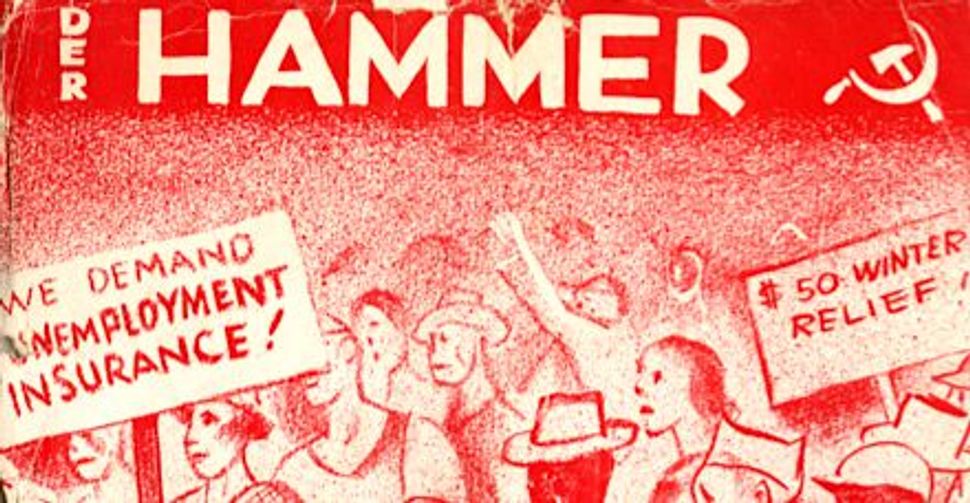 Image by Archives of the YIVO Institute for Jewish Research 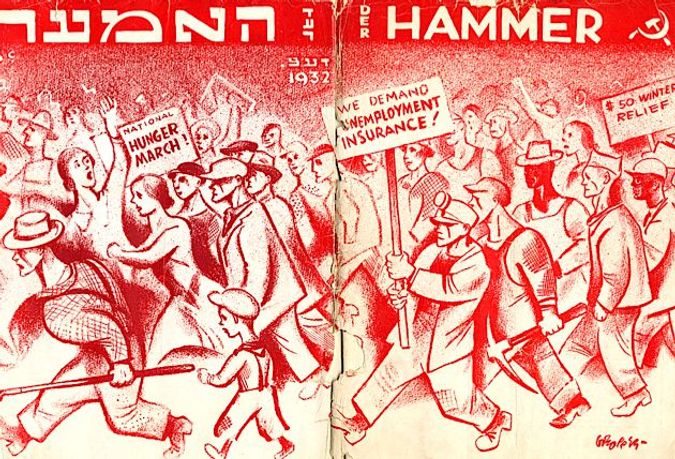 Red Jews: Debates over Jewish leftism include the legacy of Jewish communism in the 20th century. Image by Archives of the YIVO Institute for Jewish Research

On September 10, 1964, sociologist and former journalist Daniel Bell opened a conference at the YIVO Institute for Jewish Research on “Jewish Participation in Social Progress Movements,” with a lecture on “Ideology and Social Movements.” Four years earlier, Bell argued in his landmark book, “The End of Ideology” (Free Press), that politics in the 1950s were no longer driven by internal class divisions but were instead shaped by American foreign policy toward Russia. At YIVO he explained that ideology enters social movements when they emerge “in a combat posture” to oppose a corrupt ruling power. Four years later, college campuses in New York and across the country exploded with anti-Vietnam protests and student takeovers; civil rights gave way, in part, to Black Power and America experienced the rise of the New Left. Ideology had taken only a short break.

On May 6 and 7, YIVO held a new conference on “Jews and the Left.” The sold-out event, co-presented by the American Jewish Historical Society, brought together an international group of scholars to discuss the history and repercussions of Jewish involvement in leftist political movements. There were many excellent presentations on anti-Zionism and anti-Semitism, anti-Semitism and leftist theory and Jews and communism in the 20th century, among other topics.

Suprisingly, the audience’s reactions were as significant as the proceedings themselves. The visceral, and frequently contentious, responses to the papers from multinational and multigenerational listeners demonstrated the challenges of incorporating the left into larger narratives of Jewish history and in resolving Jewish political divisions over Israel.

Although the event was not a sequel to 1964, the earlier conference was never out of mind. YIVO Executive Director Jonathan Brent opened the proceedings with an audio clip of Max Weinreich greeting the attendees in Yiddish, and Hebrew University of Jerusalem history professor Ezra Mendelsohn pointedly mentioned during his concluding remarks that he had been among the youngest speakers in 1964.

Spiritually, however, the two conferences were far apart. At the earlier gathering, it was clear what Jewish workers’ movements, as well as Jewish socialist and anarchist groups, had fought for. The conference took place in the Carnegie Recital Hall (now Weill Recital Hall) and at the YIVO Auditorium at 1048 Fifth Avenue, the former dining room of socialite Grace Wilson Vanderbilt. These buildings were monuments to an ideology that held, as Andrew Carnegie memorably phrased it in “The Gospel of Wealth,” that the man of wealth was “the mere agent and trustee for his poorer brethren… doing for them better than they would or could do for themselves.” Jewish workers were not cared for by “men of wealth,” however, and instead fought for higher wages through trade unions and later built cooperative housing projects to give their members affordable housing. These, too, mark the city.

But in 2012, less than four years after a global financial meltdown, in the crowded main auditorium of the Center for Jewish History, on West 16th street in Manhattan, the goals and accomplishments of the post-’64 Left, including the New Left, were uncertain. Questioners challenged the speakers’ views from both the left and the right, with the audience cheering their rebuttals. The widely divergent attitudes were inseparable from personal and family histories, and audience members repeatedly drew on their autobiographies to explain their political positions. Comments were prefaced with statements like, “My wife is a red diaper baby,” and, “I was in Paris during the ’68 riots.” Questioners repeatedly asked if the left had betrayed Israel. The phrasing made clear that they already had answers in mind. 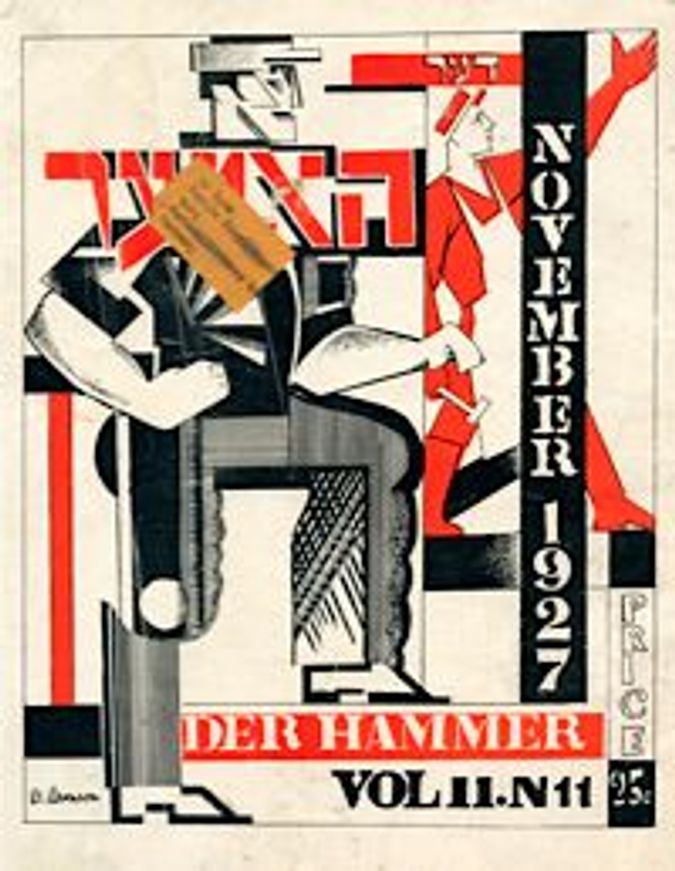 Machine Age: A cover of the Yiddish communist magazine Der Hammer, November, 1927. Image by From the Archives of the YIVO Institute for Jewish Research, New York

One of the most intriguing aspects of the conference was the extent to which the participants who self-identify with the left agreed with the view that it had indeed betrayed the Jewish state. Mitchell Cohen, professor of political science at Baruch College, established a distinction between anti-Zionism as legitimate protest of state actions and anti-Zionism as sublimated anti-Semitism, indicating that much of the current discourse falls into the latter category. Moishe Postone, professor of history at the University of Chicago, gave a Marxist critique of anti-Zionism, which, he explained, has become a “fetishized form of anti-capitalism,” meaning that people attribute to Israel and Jews all the negative effects of capitalism. This, he made clear, is racism pure and simple, and a fundamental flaw in leftist theory and practice. (And this was not offered as a criticism of the Democratic Party. Whatever “the left” meant at this conference — and it frequently stayed an abstraction — it did not refer to mainstream American liberalism.)

Mendelsohn’s closing remarks typified this contested legacy of the left. His speech was ruminative and elegiac, marking the closing of an era rather than the closing of a conference. He pointed to real historical achievements, yet also to the left’s troubling history of supporting corrupt communist movements in the name of national liberation. He described the Jewish left as “a good chapter in our history, but one which is gone.”

But questioners also drew on their own involvement with contemporary activism to challenge Mendelsohn. One spoke of her recent experiences as a community organizer as evidence of a living Jewish left; another called on her experiences at Occupy Sukkot and Occupy Simchat Torah. Earlier in the conference, questioners pointedly asked Tel Aviv University political science professor Yoav Peled about the Israeli J14 tent protests when he dismissed the relevance of leftism in Israel. Neither Mendelsohn nor Peled accepted the idea that these were real leftist movements. Perhaps that’s because the nature of the left is changing — moving away from the ideological positions of both the New and Old Left, toward community organizing and work for basic economic and social justice.

Jack Jacobs, professor of political science at John Jay College and chair of the conference steering committee, concluded his introductory remarks by raising as an open question what effect the historic involvement with leftist causes will continue to have on the contemporary American Jewish community. Here, in the audience’s reactions, was his answer: emotionally charged memories and experiences that make it difficult to see the left as an academic subject but that simultaneously leave open the possibility of revival.

So those looking for a resurgent Jewish left had reason to be hopeful. A line running through the conference, from the papers of Cohen and Postone to Michael Walzer’s keynote lecture and Mendelsohn’s closing reminiscences, was the argument that future Jewish involvement in leftist politics would hinge on building another New Left, one more open to religion and spirituality, more defined by advocacy for social justice than by opposition to Zionism. What exactly this new leftism might look like is still an open question, but representatives of a possible vision were in the audience, trying to make themselves heard.

Eitan Kensky is a doctoral candidate in Jewish studies at Harvard University.

Jews, the Left and the Rest