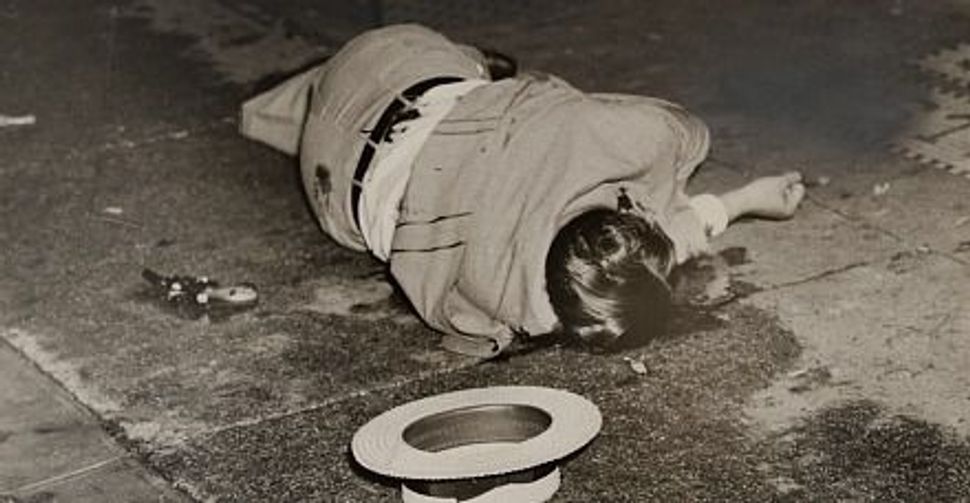 Image by weegee/international center for photography 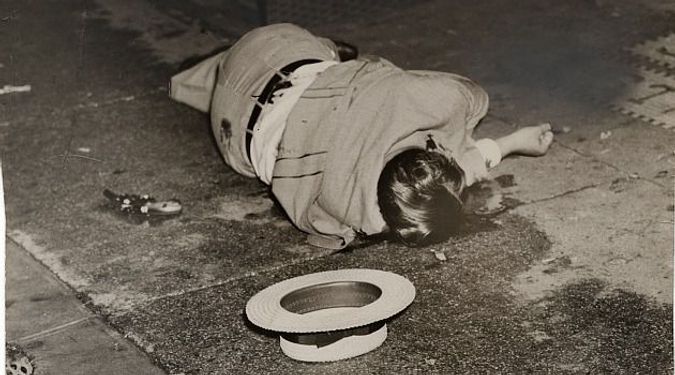 First on Scene: Born Arthur Fellig, the Jewish immigrant photographer was known for being first on the scene of bloody New York crimes. Hence, the nickname ?Weegee,? as in Ouija board. Image by weegee/international center for photography

The success of the tabloid — epitomized but not monopolized by the besieged citadel of Murdoch — relies, for the most part, on two things: the rhythmic titillation of its headlines, and eye-catching photographs of things not meant to be seen. Writing, it need not be said, is beside the point. Flip through the pages of the Daily News, the New York Post or their down-market cousins, and you encounter a rogue’s gallery of surprised, embarrassed, pained and grotesque faces. Here are transgressive views of not only Lindsay Lohan, Paris Hilton and their ilk, but of the victims, perps and pervs that make up the ranks of the common man.

If these glimpses of our culture are escapist, nihilistic and prurient, they are also morality plays of a kind. Tabloid snaps encourage both shame and the kind of rubbernecking that one was forced to do in person prior to the advent of the tabloid press. The May 17 TMZ headline, “Robert F. Kennedy Jr. Surfaces at Death House,” and its accompanying photo of the bereaved looking shifty and overexposed (in every sense), feeds both the need to gawk at death and the thrilling sense of shame produced by that very act of gawking. 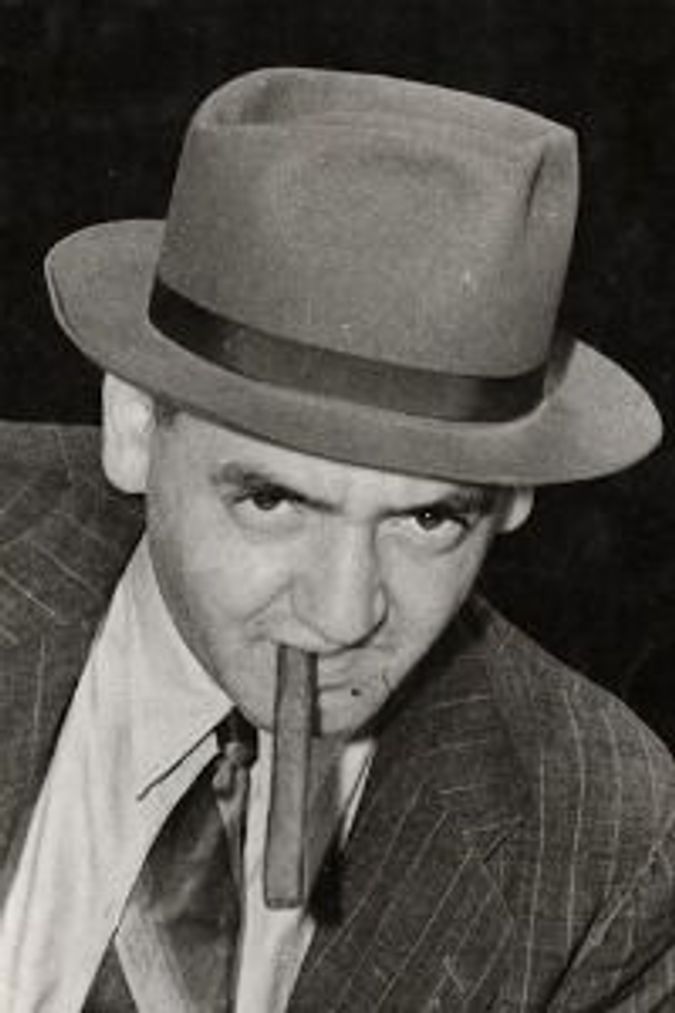 One of the pioneers of this art form — if we choose to call it that — was the photographer known as Weegee, a freelancer for the New York press in the 1930s and ’40s. His innovations are documented in an exhibit at the International Center of Photography, titled “Weegee: Murder Is My Business,” recently expanded and extended through September 2. It features more than 100 photographs and artifacts drawn from the institution’s archive and has been one of ICP’s most popular and well-attended exhibits ever. Apparently, Weegee’s noir sensibility retains its allure.

Arthur Fellig (his nickname derived either from an early job as a “squeegee boy” or from his Ouija board-like ability to be the first man on a crime scene) immigrated to New York from Austria in 1909. He was raised in a Yiddish-speaking household on the Lower East Side, where his father sold hats and worked part time as a rabbi. Weegee’s career coincided with the rise of Murder Inc., the Jewish gang and enforcement arm of the city’s Italian mob. As what he coyly termed “staff photographer” for this group of toughs, Weegee brought an artistic touch to the business of voyeurism and violence.

Susan Sontag once remarked that since its inception, photography has “kept company with death.” Weegee, who claimed to have photographed 5,000 murders, kept death company in person. His photographs, most of them taken at night, are illuminated by flash, whitening the whites of eyes and giving bystanders, cops and victims the exaggerated, roll-eyed look of wildlife caught in the headlights. They are cold, bleak and brutal, but — and here’s the surprise — not strictly rude or crass.

Weegee was a populist, as expressed in photographs of tenements and dance halls and stoops, places where someone could glance up from the funny papers and watch a body hit the ground. He was concerned with the human drama surrounding death — what we might call “human interest” today — and juxtaposed elements in an image to draw out the absurd and incongruous. A gangster is stuffed into a small trunk; behind a newspaper-covered corpse, a movie marquee advertises “The Joy of Living” and “Don’t Let ’Em Loose’”; stenciled on the side of a burning building is “Just Add Boiling Water.”

Drama is also created by the reactions of onlookers. In one photo of a crash victim, Weegee catches a stout housewife behind the corpse, laughing into the camera’s lens. A closer look shows that she is not looking at the body — she is looking at Weegee and, by extension, at us. One wonders, seeing this, at what point Weegee became famous enough that bystanders began to recognize the tell-tale fedora and cigar and began to react for him — just as club-goers on the Jersey Shore must have one day realized, when the “Guidos” came to town, that the right shenanigans would land them on the show, their faces blurred. In Weegee’s hands, tabloid photography became a form of reality TV.

“Their First Murder” is justly among Weegee’s most famous shots. It depicts a group of school children reacting to the body in front of them, though outside the frame. A woman swoons, a girl starts forward wide-eyed and a young boy’s face lights up with joy as the group swirls and surges as though in a playground race. But where Weegee gives us the crowd’s reactions, the news gives us him. The accompanying headline reads “Death in Brooklyn: Weegee Scores Another Scoop.” Celebrity, as is often the case, trumps murder.

This turning of documentation into participation was one of Weegee’s signature achievements. His self-presentation as hard-boiled detective photographer is reflected in the 1,500 portraits he took of himself, posing with bodies, with bombs, standing in for the criminal in a police procedural, playing a violin next to a pile of confiscated “loot.” He wrote first-person accounts for PM Magazine with titles like, “Weegee Passes Up Movie for Holdup Alarm, by Weegee.” The ICP exhibit includes a meticulous re-creation of the photographer’s bedroom across the street from police headquarters. The original museum’s contents were carefully curated by its occupant, with a rotating exhibit of newspaper tear sheets adorning the wall at the head of his bed.

The exhibit also re-creates, in part, Weegee’s original 1941 exhibit, also called “Murder Is My Business.” Cardstock backing holds crookedly mounted photos and cut-out letters, along with paper guns decoupaged and smeared in red paint. A white sheet is mounted on one square of black paper, where letters (and someone has put every s backward) read, “This space reserved for the latest murders.” Like Weegee himself, the show was a construct: the backward letters, the mounting job made to look like the bulletin board of a third-grade classroom, the garish red paint that’s been added to bodies and bullets and on the prints themselves (a photo is included of Weegee touching them up with red nail polish), all hit the highs of a noir aesthetic intended to provoke and titillate. It makes you want to watch.

There is a kind of pride at work here, a smugness in Weegee’s gaze. He offers no compassion for the victims, who are just props in the theater of death and disaster that is his city at night. Any empathy he has is for the viewers: those smiling, crying rubberneckers and lookers-on. In showing us people watching, Weegee forgives his own act of voyeurism in revealing and forgiving our own desire to look. The exhibit may focus on, though it doesn’t exaggerate, the more shocking aspects of his art — those bodies with extra gore — but for Weegee, murder was always a bright bit of life, a way of giving the people a thrill. Tabloid photography like Weegee’s brought disaster into the breakfast room. There, we can look, and see ourselves looking, and feel shamed and validated and critical all at once. Or we can glance past it, shrugging, and turn right to the headlines.

View a slideshow of photos from ‘Murder Is My Business’: