Thoughts That Move in Space 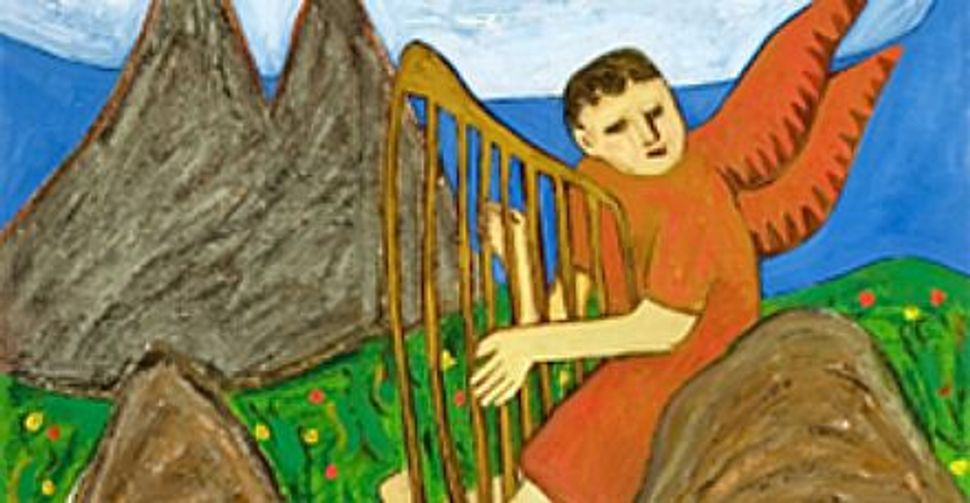 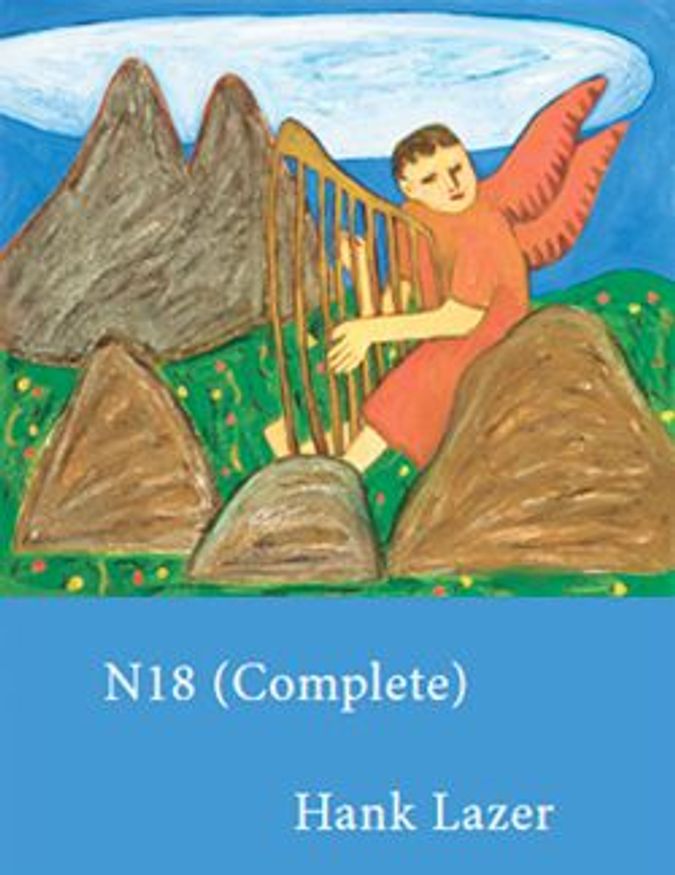 We associate the best literature with amnesia: While the book is open, we forget ourselves, curled up on a couch while the world melts away. Going through Hank Lazer’s latest poetry collection, “N18,” the reader is likely to experience precisely the opposite: Instead of a sense of escape, Lazer’s poems stimulate acute self-awareness. Moreover, through the act of reading and thinking, they flex the atrophied muscles of consciousness.

“N18” is a facsimile of the author’s handwritten notebook of “shape-poems,” as he terms them in the preface. For these works, the handwritten layout is at least as important as the actual words that comprise the poems; in fact, the two are inseparable. Similar experiments with nontraditional layout have existed since the ancient Greeks, but they became truly pervasive after the age of high modernism — perhaps most famously in Apollinaire’s “Il Pleut,” or e.e. cummings’s “r-p-o-p-h-e-s-s-a-g-r.” And although occasionally Lazer’s shapes resemble symbols or objects, most of the time they go a step further and represent the flow of the author’s thoughts, bringing us as readers to the awareness of our own, analogous flow: “[P]ay attention pay attention to what / what exactly it is that calls us into attention,” the author beckons in one of the works.

Most of us consider our brain something of a black box: Thoughts go in, thoughts go out. What they “do” inside — and how — is a question we relegate, at best, to neurobiology or psychoanalysis. If the former addresses the matter in a dryly chemical manner, the latter puts forth a highly abstract, narrative-driven approach. Lazer, author of 17 books of poetry and accomplished avant-garde practitioner, offers another dimension: “vectored thinking.”

If everything we experience happens in motion across the plane of space, it then seems logical that our thoughts, feelings and imagination would also be motion driven. Lazer charts the movement of a thought — its cadence; its circularity; its motion as it surges, collapses and intersects with other thoughts before ultimately trailing off. The effect is intensified by the fact that Lazer’s poems, like our thoughts, are unedited: Each page displays, as the author puts it, “a complete commitment to the page as one-time improvisation — a highly focused composition in real time, without drafts and rewrites.”

The poem below (titled with only a date, “8/29/10”), like most other works in the collection, contains quotes from various books that Lazer is reading. French Jewish philosopher Emmanual Levinas is the main source here, but there are other voices as well, which are as diverse as Adin Steinsaltz, Rodger Kamenetz and Lao-Tzu. Divorcing these quotes from their context, juxtaposing them with one another and with his own thoughts, Lazer edges into the world of “found art.” As he lifts these ideas out of the realm of philosophy and abstraction, he makes them more tangible. 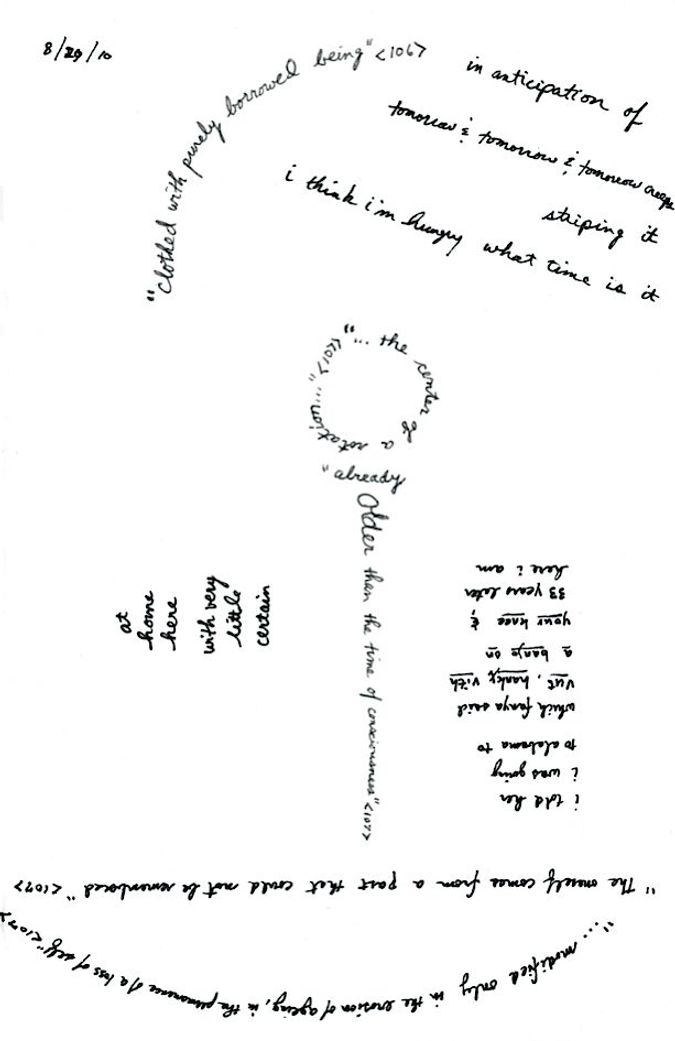 Notice how one of the Levinas quotes, “clothed with purely borrowed being,” curls around the left corner. There’s added shapeliness to this phrase; perhaps it is a beginning of vertigo; maybe there’s the half-illuminated arch in it, a doorway. The shape is suggestive, but to comment on the details of it is like ascribing semantic meaning to a jazz riff: fun but endlessly subjective, and beside the point. What’s more important — as is the case with jazz, too — is the phrase’s interplay with the poem’s other elements.

The comment in the upper-right corner begins to take off as a poetic meditation that collapses into a flat, mundane observation. Given the lofty tone of the neighboring segment, this seeming banality demonstrates the comic juxtaposition of our metaphysical stirrings and digestive grumblings.

The upside-down vignette in the midright section is a personal recollection. Lazer is a professor at the University of Alabama, where he’s worked for more than three decades. You can hear him channeling a 30 year old memory: of breaking the news about getting his job, perhaps to his grandmother Fanya, whose Yiddish-tinged accent he reproduces: “vut, hanky, vith / a banjo on / your knee.”

Even the poem’s shape resembles a string instrument. With the lilt of Fanya’s accent, the reference to a banjo, the melancholy tone of a juxtaposed segment “at / home / here / with very / little / certain,” this poem reads musically, imbued with that great old blues-feeling of displacement, a sense of nowhere to go and uncertainty as to what comes next.

Or perhaps not simply so. Maybe deeply metaphysical concerns of Levinas anchor the author’s mind; or, hold down the author’s focus like a paper press.

Both anchor and paper-press shapes can be discerned by looking at the poem — and so can numerous others. Free associations come and go: crowding, layering the text with more meanings. Reading the poem, we turn the page this direction and that, just the way thoughts swirl around in our minds. The poem’s rotation perpetuates itself. With no formal beginning or end to the narrative, the poem is in constant motion. And given the context of the words encompassed in the work, there’s a sense of spiraling: “turn / & turn / & turn / inward” he says in another untitled composition.

The turn inward, to spirituality, is a primary concern for Lazer, one that precedes poetry and at the same necessitates it: “and all of man’s spirituality would be prophetic” he quotes Levinas in one of the poems. A spiritual experience of written improvisation, then, brings forth an outcome where poetry and prophecy converge. With phrases like Levinas’s “center of gravity of existence is outside of existence,” Steinsaltz’s “nullification of being” or his own “the turn became a calling / in turning,” it’s clear that the author is preoccupied with the mystery of human existence.

Before turning to the “Notebooks” project that this book is part of, Lazer worked on a series of 54-word poems, a form he invented, among others. The poet approaches his forms ritualistically, coming back to them repeatedly, sometimes for years at a stretch. And it is thus that he invites his readers to join his rite — a newly forged opening in thinking about poetry, and in thinking about thinking itself.

Jake Marmer is a frequent contributor to the Forward.

Thoughts That Move in Space