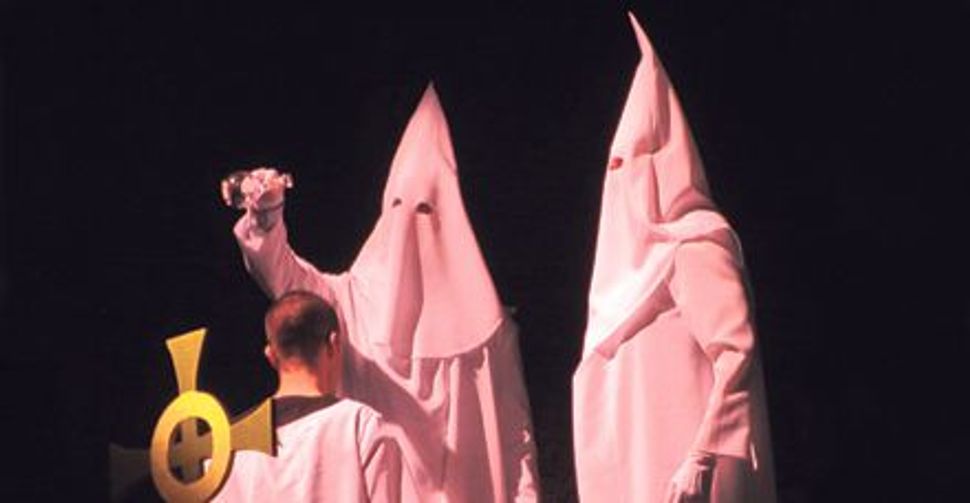 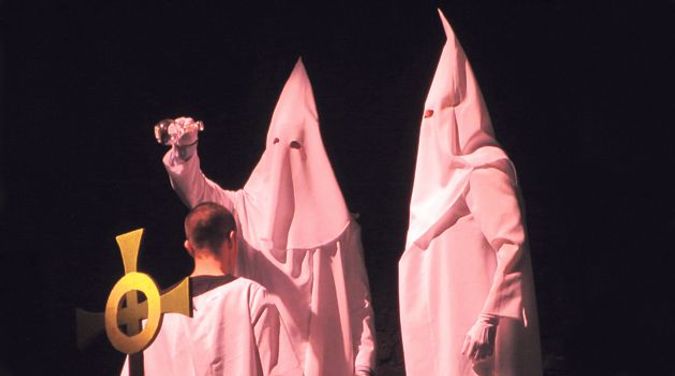 Hooded Menace: Love and decency usually get short shrift when it comes to operatic treatments. Image by LAWRENCE HICKS

By chance I attended “Slaying the Dragon,” a new opera on the subject of violence and surprising redemption, on June 17, the same day that Rodney King died. King — the victim of a savage beating in 1991 by Los Angeles police (the video of which provoked one of the worst race riots in recent American history) — famously pleaded for reason and decency: “Can’t we all get along?”

Historical examples of hatred and love have long provided fodder for operatic treatment, though decency usually gets much shorter shrift. “Slaying the Dragon,” which is based on a true story from Kansas roughly contemporary with the Rodney King beating, concerns Larry Trapp, a Ku Klux Klan Grand Dragon who renounced violence and converted to Judaism. The opera begins in the aftermath of the bombing of a local Asian Center and climaxes with the barely thwarted bombing of the local synagogue, with the rabbi delivering a considered and eloquent plea for reason and decency derived from the words of a different victim of violence and hatred, also named King.

In the sermon he penned while in jail during the 1957 Montgomery Bus Boycott, Martin Luther King Jr. wrote: “Returning hate for hate multiplies hate, adding deeper darkness to a night already devoid of stars. Darkness cannot drive out darkness; only light can do that. Hate cannot drive out hate; only love can do that.”

Philadelphia, the City of Brotherly Love, also had its own similar history of hate, such as when, barely seven years prior to the aforementioned events, the city police themselves bombed a residential house, creating a fire that burned 11 people to death and destroyed 60 neighboring homes. Today Philadelphia seems to be a hotbed not of fires, but of new operas. Opera America, the national professional organization for opera companies and performers, held its annual conference there this year in June. Andrew Kurz, founder and musical director of Philadelphia’s enterprising 14-year-old Center City Opera Theater (CCOT), has for the past four years commissioned and premiered a new opera annually, and arranged for this year’s offering to coincide with the conference.

Riveted by the revelatory 2001 book “Not by the Sword: How a Cantor and His Family Transformed a Klansman,” by Kathryn Watterson, Kurz commissioned librettist (and former chief editor and CEO of the Jewish Publication Society, currently managing director of CCOT) Ellen Frankel to create a musical theater work based on the story, and Michael Ching, composer of four other operas (and former general and artistic director of Opera Memphis), to write the score. In a talk before the performance, Ching explained that even as a fourth-generation American of Chinese ancestry, as a young man he still encountered taunts of “Go back to where you came from!”

Creating an opera is a strangely alchemical process. How do the music and words lift the audience into another realm? When the subject matter is familiar history, it is an even more challenging task to incorporate period fashion, local vernacular and musical style. Nevertheless, the idea of operas ripped from the news headlines has a long tradition. Verdi’s “A Masked Ball” was about the assassination of the king of Sweden (although to get past the censors, the victim was changed to the governor of colonial-era Boston). Marc-Anthony Turnage has just had a major success with “Anna Nicole,” an opera about tabloid star Anna Nicole Smith. And my pick of last year, “Kommilitonen!” (“Young Blood!”) by Peter Maxwell Davies, wove together three historical protest movements: the anti-Nazi White Rose, James Meredith combating racism in Mississippi and the Cultural Revolution in China.

Inevitably, Frankel took artistic liberties with elements of the Kansas events, such as changing the names and transforming the cantor into a rabbi. Kurz conducted the score of “Slaying the Dragon,” written for 16-piece orchestra and 11 singers, plus adult and children’s choruses, with clarity and passion. But the music itself, though admirably structured and varied, is largely uninspired. It is mostly in a square 4/4 time signature, except when the subject of peace drives it into saccharine waltz 3/4 time, or when strife drives it into compound meters.

The most effective parts of the score are those that are most stripped-down, where the composer takes a chance and the singers get an opportunity to breathe. This happens when bare pizzicato strings accompany the beginning of the aria of the rabbi’s wife, “Doesn’t the Torah teach” (which Teresa Eickel sang attractively until she began to push her voice too hard, as she and several other members of the otherwise talented cast did all too often), or when the spare string bass accompanies the mostly spoken scene of Grand Dragon Jerry Krieg (the capable tenor Christopher Lorge) telephoning people to make racist threats.

Most embarrassing — though charismatically acted and performed by rich-voiced baritone Roland Burks — was the over-the-top “Kumbaya” forced-joy moment when the audience, company and orchestra is led in a jazzy shout-out gospel-like version of the psalm verse “Hinay ma tov.” In contrast, Burks’s early scene of fear, “My home’s no longer safe,” was particularly moving, with the singer pushing the meaning beyond the limits of the score.

The young bass Paul Corujo is definitely a singer to watch out for. As the talk show host and grand magus of the KKK, he appropriately insinuated himself in smarmy fashion into the focus of all his scenes. Bass Jason Switzer, possessed of a voice equally rich, seemed uncomfortably cramped by his part as the rabbi, even in the climactic sermon on King. Mezzo Jody Kidwell, as the concentration camp survivor, made the most of her aria, but director Leland Kimball’s decision to have her display to everyone onstage the camp tattoo on her arm in silent anger, undercut the show’s momentum.

If the composer had provided music for this moment, or at least set up Kidwell’s scene to support the sudden silence, it would make more sense as opera. As it is, showing the tattoo with no support in the score may show proper respect for the Holocaust but not for the opera.

Another problematic artistic choice was the conflation of the singers’ racial identities with those of their characters: the Asian-American singer (David Koh) played the Asian immigrant, the African-American singer (Burks) played the black preacher, while all the neo-Nazis were white. The Juilliard School’s production of “Kommilitonen,” in contrast, dispensed with such identity politics by sticking small pieces of colored tape on the singers’ faces, whatever their personal racial identity, with colors changed as needed. This emphasized roles rather than identities and gave more power to the underlying drama.

Puzzling, too, was the musical symbolism, like having the KKK characters’ oath of hate musically “rhyme” with the opposing paean to love and understanding. Although the juxtaposition is theatrical, it also makes them spiritually equivalent, thus contradicting the essential message of the opera. Similarly, the KKK rally scene ends with hoods removed, revealing an everyday “normal” woman (Sarah Beckham) who also works for the rabbi, a revelation that seems to undercut the central proposition that hatred grows from abuse.

Probably this confusion is a historical elision made necessary by the opera’s demand for brevity. Unlike opera’s more straightforward dramatic needs, truthful history is almost always complex and contradictory. King’s principles of nonviolence, for example, which furnish the climax of the opera, come from the man who had learned them personally while working with Mohandas Gandhi in India: Bayard Rustin — a man who, in addition to being one of the prime movers of the civil rights movement, incidentally happened to be an accomplished professional tenor.

But when push came to shove and the fact that Rustin was gay (and a Socialist and former Communist) threatened to disrupt the movement, King didn’t hesitate to throw Rustin under the bus, so to speak. Even though Rustin himself recommended this for the good of the movement, he still has not received the credit he deserves as the prime mover of nonviolence in America. Combating hate with love is a complicated endeavor.

Raphael Mostel is a composer based in New York City. He is a frequent contributor to the Forward and other publications.