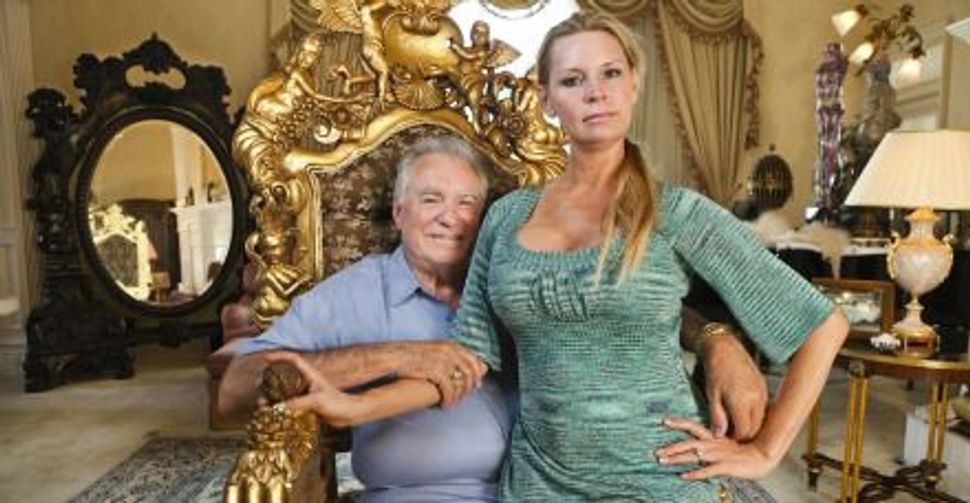 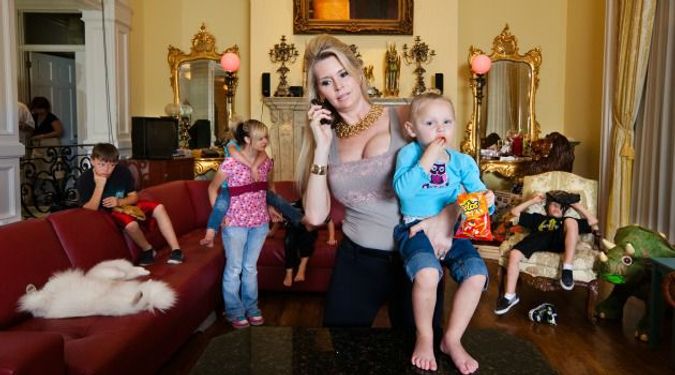 Hall of Mirrors, Fla.: David Siegel wanted to build an opulent palace for his young wife, Jackie, and their growing family. Then the real estate bubble burst. Image by lauren greenfield

In an on-camera interview, David Siegel crows that he got George W. Bush elected president. When asked how he did that, the Florida resident declines to give particulars, claiming his actions “might not have been legal.” His wife, Jackie, brags that she’s spent as much as $1 million a year on clothing, including $17,000 on a pair of Gucci crocodile boots.

The two big spenders are at the center of “The Queen of Versailles,” a brilliant and infuriating documentary that begins as a film about the American dream and ends as one about the American nightmare. It earned its director, Lauren Greenfield, a best director nod at the Sundance Film Festival earlier this year.

David Siegel, 76, is the billionaire founder of Westgate Resorts, which he claims is “the largest privately owned time-share company in the world.” Jackie, 31 years his junior, is David’s surgically enhanced wife, and mother to seven of his 13 children. They live in a 26,000-square-foot home in Orlando, Fla., with a household staff of 19. They believe the house is too small.

So, in 2004, the couple set out to build another home, based on the palace of Louis XIV at Versailles and the Paris hotel in Las Vegas; at 90,000 square feet, if completed, it will be the largest in America. The house will have 10 kitchens — though Jackie doesn’t cook — 30 bathrooms, a bowling alley and a roller rink. The couple spent $5 million on marble alone. On a filmed tour of the construction site, Greenfield asks Jackie if a large area is her bedroom. Jackie replies, “That’s not my room. That’s my closet.”

All went well until the credit crunch of 2008. The Siegels’ problems weren’t caused by the house — though it did become a burden. Rather, David’s company ran into trouble as lending dried up. Typically, Westgate customers borrowed money from the company to pay for their vacation time-shares. The company, in turn, borrowed from the banks at lower interest rates. When the banks stopped lending, the bottom fell out.

Added to that difficulty was the burden of the PH Towers Westgate, a new 52-story high-rise luxury resort in Las Vegas, which drained Siegel’s corporate resources as well as $400 million of his own money. Finally, in November of 2011, Siegel was forced to sell.

“I didn’t think people like them would be affected by the economic crisis,” Greenfield, 46, told the Forward in a recent telephone interview. “I assumed that people with this kind of wealth would have a lot of money on the side — a cushion, some protection. It wasn’t until later that David told me he had signed personally for all the loans.”

At the end of the film, Greenfield captures the moment when the lights go out at the top of the building and the PH Towers Westgate becomes just the PH Towers.

“The Queen of Versailles” got its start in happier days, in 2007, when Greenfield was photographing Donatella Versace on assignment for Elle magazine. Jackie was there as one of the designer’s best customers. The two women took an immediate liking to one another.

“I was intrigued by her because of her wealth,” Greenfield said. “She showed me pictures of her seven kids on the steps of their private jet. She didn’t have the veil of privacy a lot of rich people have.”

Originally, the project was going to be a look at how the wealthy live and, of course, at the Siegel’s house-in-progress. It was very much in line with Greenfield’s previous work as a documentarian and photographer.

The daughter of university professors who ultimately divorced, Greenfield was born in Boston and grew up in the Venice Beach area of Los Angeles. After high school she majored in visual anthropology at Harvard, and decided to pursue photography after several unsuccessful attempts to get into film school.

Her first major project was a series of photographs of French aristocracy inspired by a stay with an uppercrust family during a high school year abroad. Coming from Los Angeles, where social class is defined by money, she was fascinated by a society where status is determined by heritage. Lauren’s “French mother” provided her with an entree into the French aristocratic world, where she photographed their “social rituals, dances and coming out parties.” It was the antithesis of the Siegels, who grew up lower-middle class and later became wealthy.

The result was a well received and widely toured photography exhibit called “Survivors of the French Revolution” that established Greenfield’s career. It was followed in 2002 by “Girl Culture,” a book of photographs that became the basis of her first documentary, “Thin,” about women, body image and eating disorders. Two shorter documentaries, photo books and touring exhibits came after, as well as magazine assignments like the one where she met Jackie Siegel.

In “The Queen of Versailles,” Jackie comes off sympathetically — an innocent without artifice who says whatever comes to mind. When the Westgate business and the world economy go south, Jackie is forced to lay off 15 of her staff. She says she never would have had all of her children if she knew one day she’d be down to just three nannies. It sounds terrible, but the woman is completely oblivious to the impact of her words — including what her children will think when they hear them.

The film is replete with similar examples. Forced to give up her private jet, Jackie flies on a commercial airline to her hometown of Binghamton, N.Y. When handed the keys to a Hertz rental car, she asks the befuddled clerk for the name of her driver. Simply put, she is a naive visitor to Planet Reality from the solar system Über-Wealthy.

David, on the other hand, appears more arrogant. Why did he build a 90,000-square-foot house? “Because I could,” he says. Unlike his wife, he’s not oblivious to how that sounds. He is a self-made man who always gets what he wants when he wants it. Because he’s wealthy, he feels entitled to it. His ego is as large as the house he wanted to build. And as for the masses? Let them eat cake.

After the film was completed, Siegel didn’t like the way Greenfield portrayed the decline of his fortunes, so he sued her. He claims that she edited scenes out of the sequence in which they were shot, and made it seem as though the company was going under and that Versailles was kaput. Siegel refused the Forward’s requests for an interview, and calls were referred to Sitrick and Company, a public relations agency. The Sitrick representative said that Westgate has never been more profitable — because it is privately held, that is impossible to confirm — and that construction on Versailles will resume this month. Meanwhile Greenfield claims that Siegel’s “allegations are false” and notes that Jackie was recently with her promoting the film.

But why did the Siegels allow her into their lives in the first place? During the course of shooting the film, Greenfield visited (and usually stayed with) the family around a half-dozen times. At some point it should have been obvious that the couple and their lifestyle were not coming off well. The house was carpeted in dog feces because the pets were never trained to go outside. Before the layoffs, there was always a staffer around to pick up after them. (According to a recent article in The New York Times, Siegel claimed that the problem was caused by the fact that one of the dogs had cancer.) Worse, one of the Filipino nannies lived in a child’s playhouse in the back yard and hadn’t seen her own children in 11 years.

“I think David was proud of building the biggest house in America. But I think it was more Jackie’s thing,” Greenfield posited to explain the access they gave her. “I think she liked me and liked the attention and liked being in front of the camera. Also, I think she was proud of what she accomplished and where she was in life.”

Greenfield treats the couple with surprising sympathy considering their excesses. “I try to be non-judgmental when I’m working,” she said. “I’m more interested in ‘Why is this happening?’ and ‘What does it say about us?’ I don’t want to idealize them, either. What was interesting about them is that in some ways they represented both the virtues and the flaws of the American dream.”

Though Greenfield is Jewish — she’s in early stages of planning her son’s bar mitzvah next year — and so, it seems, are the Siegels, she said that she didn’t consider portraying Jews as the vulgar nouveau riche. “I started the story about Jackie and religion wasn’t part of the equation,” she said. “I never let [being Jewish] influence me in my projects.”

“Queen of Versailles” may not have Jewish significance for Greenfield, but she also said its message is applicable not just to the super-rich. “It really is a morality tale about overreaching,” she said. “I think their story shows the consequences of going too far; it’s a lesson not just for rich people, but for all of us.”

Curt Schleier is a freelance writer who teaches business writing to corporate executives.

“The Queen of Versailles” opens July 20 in New York and Los Angeles and across the rest of the country throughout July and August.