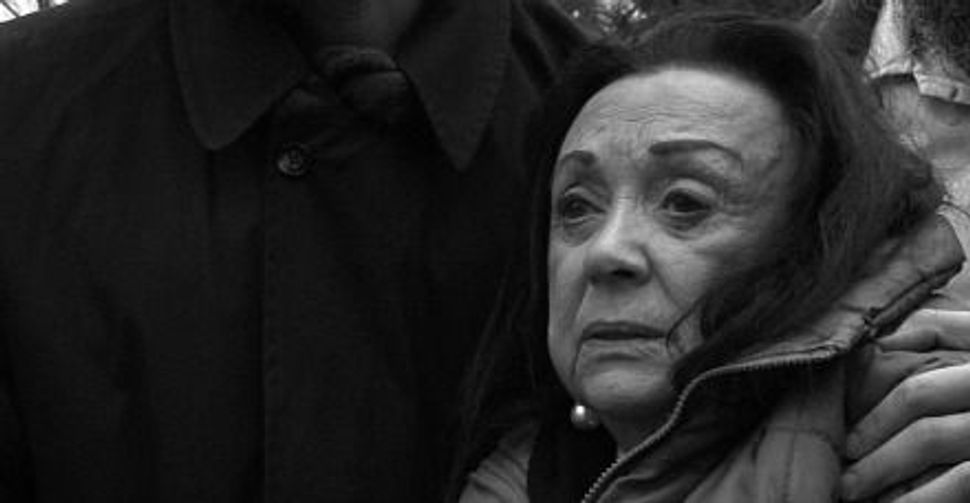 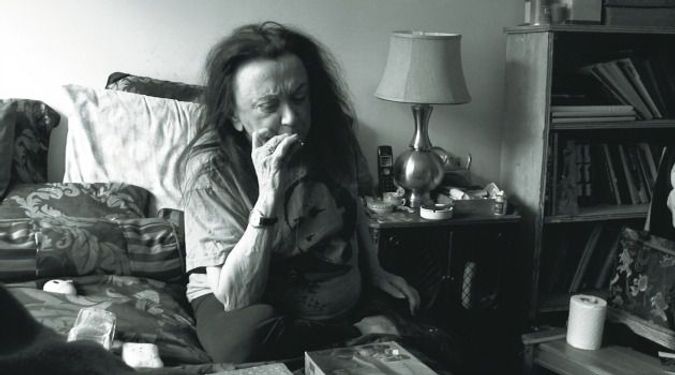 Still Radical: The legendary director Judith Malina is captured in some intimate moments in a new documentary. Image by Azad Jafarian

The subject of a new documentary, “Love and Politics,” which premiered at the Tribeca Film Festival in April, actress and director Judith Malina is internationally celebrated for startlingly unconventional theater, such as her 2011 play “Korach: The Biblical Anarchist.”

A rabbi’s daughter who turned 86 on June 4, Malina has long been invigorating and scandalizing audiences with avant-garde theatrical inventiveness. Although occasionally appearing in films and TV — from Sidney Lumet’s “Dog Day Afternoon” (1975) to “The Addams Family” (1991), and as a dying nun who confesses to being a gangster’s birth mother on HBO’s “The Sopranos” (2006) — Malina’s main focus has been overwhelmingly theatrical.

The Living Theatre, which she co-founded in 1947 with her husband Julian Beck, who died in 1985, broke boundaries and expectations while expressing a spirit of left-wing pacifist anarchy. For many years, the theater company also featured nudity and overt sexuality, which discomfited some of the critics and public. Before one of Malina’s 1990s theatrical happenings in Paris, the American Jewish jazz clarinetist Steve Lacy (1934–2004, born Steven Norman Lackritz) told me: “We only recently convinced Judith to put her clothes back on during the shows, since some audiences were complaining.”

Still a wild child and free spirit, Malina is deeply influenced by Yiddishkeit, which her compelling new journal and memoir, “The Piscator Notebook,” makes clear. In it we read about how Malina was born in Kiel, Germany, in 1926 to Rabbi Max Malina and Rosel Zamora. Malina’s mother, a Yiddish theater actress, had shelved her own career ambitions to raise a family. In 1928, already wary of the rise of European anti-Semitism, the family moved to New York.

Once there, as we read in Steven Lowenstein’s “Frankfurt on the Hudson: The German Jewish Community of Washington Heights, 1933-82, Its Structure and Culture,” Rabbi Malina became a key figure in New York’s German Jewish spiritual life. His daughter realized her mother’s frustrated ambitions by studying acting and directing at a school founded by one of Rosel’s artistic heroes, the leftist director Erwin Piscator, who resolved, as Malina describes, “to make the world better through the art of the theatre.”

The Nazis hated Piscator’s Marxism so much that even though he was Protestant, he was treated as if he were Jewish and forced to flee Germany in 1936. Piscator established a New York theatrical school where the teachers included Jewish refugees such as the Habima company’s Raikin Ben-Ari, who taught the young Malina, as she recalls, that the “stage is not a mirror but a magnifying glass, and that I could overcome my Jewish inhibition of making the sign of the cross on stage because, as an actor, ‘there is no facet of human nature alien to myself.’”

Although Malina shared her mother’s deep admiration for Piscator’s innovations, she did not agree with all of her mentor’s political views:

I did not share Piscator’s unqualified admiration for FDR. My father had been dedicated to the lifting of the [anti-Semitic U.S.] immigration quotas, which would have saved countless lives. But petitions and protests and appeals were to no avail. Roosevelt defended the legal limitations that prevented masses of Jews from escaping from their Nazi persecutors.

Though she stayed home from school for Passover and other High Holy Days, Malina was sometimes obliged to work on Shabbat. During a 1946 production of “Hannele,” Gerhardt Hauptmann’s play about a “young soul striving towards purity,” Malina reflected that she herself had been forced to choose “between the theatre and the shabbos. But since I had already made my decision for the theatre, the best I could do was light the shabbos lights in the dressing room, or in a hotel room, which I have managed to do all my life.”

Among other teachers were the eminent German Jewish architect and art historian Paul Zucker and stagecraft wizard Hans Sondheimer, a veteran of Berlin’s Jewish Culture League, who taught Malina “how to drive a three-penny nail through a half-inch plank in three strokes.” She was also influenced by her fellow students, including aspiring Jewish actors destined for film or TV careers, such as Walter Matthau, Tony Curtis (then known as Bernie Schwartz), Jerry Stiller and Bea Arthur (born Bernice Frankel).

Others she studied with were talented, but remained as devoted to theater as Malina. George Bartenieff was later celebrated for his marathon show “I Will Bear Witness,” adapted from Victor Klemperer’s 1933-1941 diary of Nazi oppression. Anna Berger, another classmate and mentor, starred in the 2009 Aviva Kempner documentary “Yoo Hoo, Mrs. Goldberg” as well as the 1950s TV series which it celebrates, and was recently still touring with her own one-woman show.

To pay for classes, Malina worked in a laundry and as a “waitress, singer, and hat-check girl” at the nightspot owned by the German Jewish cabaret icon Valeska Gert, who had played the role of Polly Peachum in the 1931 film version of the Kurt Weill-Bertolt Brecht “Threepenny Opera.” In one class, a teacher commended Malina’s well-honed pantomime in the role of a waitress, unaware of the student’s laborious nightly training in such gestures.

The classes themselves, as described by Malina, were revelatory on many levels. When one teacher played a scratchy recording of the famous French Jewish actress Sarah Bernhardt in Racine’s “Phèdre,” Malina recalls: “At first, it sounded like nothing but a most unhappy chicken,” but after repeated study, the “gliding, classical rhythm, and the beauty of Sarah Bernhardt’s rendition became clear.” Other classes included performances that immediately struck her as exemplary, such as when instructor Herbert Berghof recited excerpts from the 18th-century German philo-Semitic play “Nathan the Wise.” Malina comments: “Mr. Berghof’s Nathan was so wise, so Semitic, so humorous as to elude description.”

By contrast, Malina was fiercely self-critical of her own early class performances, such as in Racine’s Old Testament-inspired “Esther,” as part of a chorus which played the role of the eponymous heroine in the student staging. Concentration was a problem for Malina as a teenager, and the more she struggled, the “harder I was thinking of thinking and the less I was being a Jewess freed from slavery.” This pensiveness made her independent-minded. Though her classmates dismissed it as commercial Broadway fare, Malina relished “Jacobowsky & the Colonel,” a 1944 romantic comedy-drama adapted by S. N. Behrman from a Franz Werfel original. The same play was later filmed, starring Danny Kaye, as “Me and the Colonel.” Malina mused: “Perhaps [the play’s] European, Semitic flavor was closer to me.”

That flavor led Malina to perform at Maurice Schwartz’s Yiddish Art Theatre on Second Avenue as one of the angels in a production of [I.L. Peretz’s “Dray Matones” (Three Gifts)][20]. From Schwartz, Malina states that she learned a “different discipline” derived from the acting style of the celebrated “Dybbuk”: “It is an endless struggle between outcry and restraint. The Jewish outcry overcoming the restraint of oppression.”