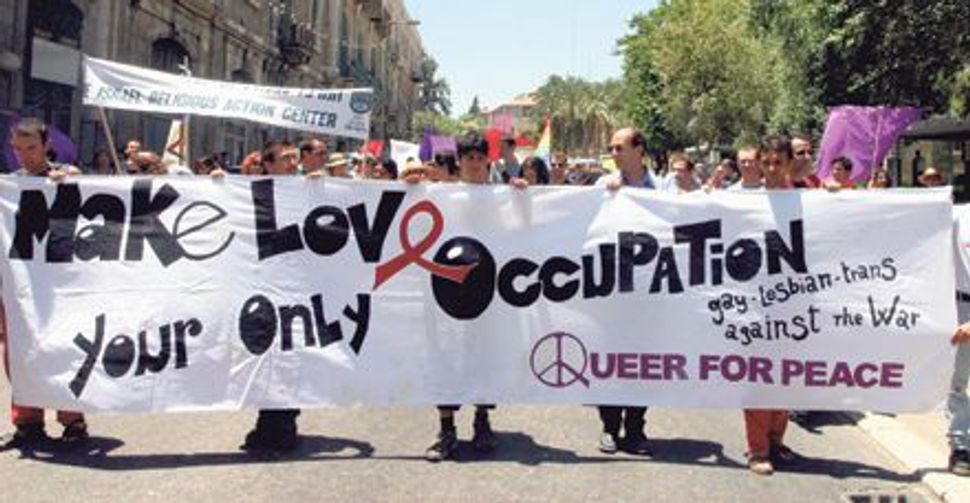 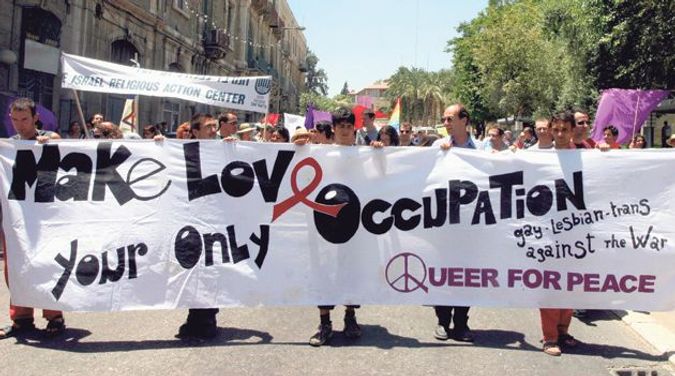 Against War, or More? And once the occupation is ended, is there a next target for a protest? Image by getty images

Let me start with my bona fides. For several years, and at significant personal cost, I have spoken out about Israeli policies in the West Bank, in particular the settlements and the route of the separation barrier, which I deem to be generally illegal, immoral and harmful to both Israelis and Palestinians. I am also a longtime activist for the lesbian, gay, bisexual and transgender community, and have supported those in my community who protest Israel’s policies — including by calling for boycotts, divestment and sanctions, which I do not support — on the basis of a shared solidarity with those who are oppressed. And an essay I wrote in these pages a few years ago on my wavering love for Israel still gets plenty of airtime and plenty of nasty comments.

I begin with these left-wing credentials because my aim in this column is to call out my liberal colleagues on certain of our blind spots and try to communicate to fellow progressives when, in my view, their criticism of Israel becomes deeply problematic — even, dare I say it, anti-Semitic. I do so because, just as I am uncomfortable in Jewish nationalist circles where people routinely make racist, violent and ethnocentric remarks (and where those remarks support real-world policies with real effects on real people), so, too, I am uncomfortable in left-wing circles where some people evince a casual disregard for the legitimate concerns of Israelis and Jews, for the very real and very deep problems on the Palestinian side, and even for the truth.

When does this happen? I’ll give four examples, focusing, where appropriate, on the LGBT community, which I know fairly well.

First, there is a problematic lack of disclosure among many critics of Israel that their ultimate view is that Israel should not exist at all. For example, despite having recently defended the Jewish Voice for Peace organization in these pages, I do not accept its leadership’s decision to remain officially agnostic on the “one-state solution” — that is, the end of the Jewish state and its replacement by a majority-Palestinian one — especially because when I talk with the JVP supporters I know, that turns out to be their personal view.

Now, whatever the merits of a one-state solution as opposed to a two-state solution, surely activists and pundits should be clear about their ultimate views so that they may be understood. In my view, what is wrong with the Occupation is that it oppresses Palestinians, undermines Israel’s sustainability and contradicts Israel’s own democratic ideals. But that’s quite different from saying that the entire Israeli state is illegitimate. Yet, many times, left-wing critics of Israel pretend to speak out about this or that human rights abuse, while really, they have no vision for the future other than Israel not existing at all. I find myself supporting one cause (criticizing this latest abuse) when the real cause is actually something else (calling for the end of Israel).

This is a shell game, and it’s dishonest. Just as I call out my right-wing friends to tell me their endgame (per Benjamin Netanyahu and Ariel Sharon, this involves Israel wearing down the Palestinians for decades so that they will be willing to accept a deal; per Avigdor Lieberman, it involves population transfer), so I call out my left-wing friends to do the same. Tell me what the endgame is. Is it the end of the Jewish state entirely? Is it the return of Jewish “colonialists” to Europe and North Africa, from whence they fled under the shadow of anti-Semitic violence? Or, perhaps, is it an immediate, unilateral withdrawal — in which case, what is to prevent the West Bank from becoming the next Gaza, with rockets falling all over Israel? I am absolutely on board with criticizing many Israeli policies, but I also want to know where my partners stand on “final-status” issues. Otherwise, I’m being co-opted.

In addition to betraying liberal allies, the radical-left shell game also causes conservatives to be rightly suspicious of anything the left says. J Street, for example, consistently and regularly repeats that it supports the existence and security of the State of Israel. Yet because its further-left allies do not make the same assurances, the whole progressive enterprise is viewed with suspicion by the right (which includes most funders of American Jewish institutions).

Second, there’s the one-state policy itself. Café-radicals who support this view need to look it squarely in the eye and call it what it is: selective cultural genocide. There is no way that a binational state will be a safe haven for the Jewish people or that it will preserve Jewish culture. It also creates a curious anomaly: the one-state solution means that every people on the planet, from Peruvians to Pakistanis, deserves self-determination — except one. This is where anti-Zionism slides into anti-Semitism. Why are Jews to be treated differently from every other nation on the planet? Is Jewish nationhood more dubious than others? Other states, too, have minorities within them, and have boundaries that include those minorities’ historical lands — including Peru and Pakistan (the latter, of course, the result of the partition of British Colonial India). So why call for one state in Palestine but not elsewhere?

Now, a good radical can argue that all states and all forms of nationalism are illegitimate, that the United States should return Native American lands to the Native Americans and so on. But that same radical must explain why that change should begin with Israel, a small state surrounded by enemies, rather than with, say, France. Critiquing nationalism strikes me as a good idea — but using Israel as the test case is so bizarre as to invite accusations of bias. At the very least, radicals should “come out” if their real target is nationalism of all kinds. Of course, doing so places one beyond the pale of mainstream political discourse — but at least it’s honest.

Third, and relatedly, it is true, as the Jewish right alleges, that the left is oddly focused on the State of Israel, as opposed to human rights abusers who are demonstrably and quantitatively worse — including Chinese policies in Tibet, America’s unrecompensed genocide of Native Americans, the suppression of the Roma in Europe, the destruction of indigenous cultures in the Amazon and countless other examples. China’s occupation of Tibet has killed more Tibetans than there are Palestinians in Gaza. If we’re interested in solidarity with the oppressed, let’s focus on those who are most oppressed.

Of course, Israel, unlike China, is the beneficiary of massive aid from the United States, so Americans may be right to focus on it. But the rhetoric one hears is not so subtle. As reflected in the recent public opinion poll that ranked Israel roughly equivalent to North Korea (a totalitarian regime with a network of concentration camps, widespread starvation and nuclear belligerence toward its neighbor), Israel is often depicted as the most oppressive country on Earth. Which is objectively absurd.

It’s not hard to see why many Jews perceive this as anti-Semitism. And for leftists to simply wave away these deeply felt concerns is, itself, offensive. No, the Holocaust does not justify every policy of the State of Israel. But it does justify a heightened level of scrutiny when criticizing Jews. Just as I try to remind myself of my white privilege, my economic privilege and my male privilege in my anti-oppression work, so, too, anti-oppression activists should be aware of the reality of anti-Semitism and the way it informs political discourse. If you single out the Jewish state for criticism among all countries in the world, the onus is on you to demonstrate that your discourse is free from conscious or unconscious anti-Semitism. Even if you’re Jewish.

Finally, many of Israel’s critics are guilty of massive oversimplification of both Israeli and Palestinian society. For its part, Israel is often defined solely in terms of the Occupation, as if it’s the only salient feature of Israeli life and culture. Any discussion of other topics — its environmental achievements, LGBT rights, even domestic social justice issues — is said to be a distraction, or propaganda, or worse. That is absurd. Israel, like anywhere else, is multifaceted and complex, and discourse about Israel is not a zero-sum game. Ads promoting “Gay Tel Aviv” are tourist advertising, not political propaganda. Hyperbolic public relations about Israelis inventing the cell phone is PR, not some attempt to justify the Occupation. Imagine if everything Americans said about themselves was seen as a smokescreen to obscure the oppression of Native Americans.

But the flattening of Palestinian society is even worse. Ironically, given the critics doing it, it’s Orientalist to depict the Palestinians — as Sarah Schulman did in the pages of The New York Times — as noble victims of European colonialism, free from blemish and fault. Such oversimplifications are no different from those of noble “Indians,” noble poor people, or noble savages in general and are offensive to Palestinians and Israelis alike.

For example, in one of the accounts of an LGBT trip to the Palestinian territories last year, one participant expressed dismay at being told not to be visibly affectionate with her female partner. This naiveté is revealing. Palestinian society is patriarchal, homophobic and conservative. The Palestinian Authority has done little to prosecute so-called “honor killings” (that is, murders of LGBT people or unmarried women suspected of sexual activity), and there are hundreds of LGBT Palestinians living, legally and illegally, in Israel as a result. That doesn’t mean that Palestinians shouldn’t have the right to self-determination, but it does mean that facile dichotomies of victim and oppressor are misplaced. I don’t know what queer paradise this particular individual expected to find in Ramallah, but the expectation says much about the naive propagandizing that takes place in my community. There’s pinkwashing on both sides of the political fence.

And I’ve not even touched the erasure of non-European Jews from this Orientalist, black-and-white rhetoric; the lack of economic analysis of Arab oppression; the shockingly naive statements about Islamist parties and their aims (from the likes of Judith Butler, no less); the shared responsibility for the collapse of the Oslo process at Camp David; the death toll in the second intifada that provoked the construction of the security barrier, and a dozen other complicating factors that undermine the attempts of literature professors and armchair activists to adequately assess this situation.

I remain committed to a two-state solution and a just resolution of this conflict. My sympathies are still with progressives, Jewish and Arab, who seek peace rather than victory. I oppose the ethnic cleansing of East Jerusalem (funded by a handful of American Jewish “philanthropists”), and the minimizing of Palestinian issues due to the threat of a nuclear Iran. But just as I wrote three years ago that I was losing my love for Israel, so, too, am I losing my affinity with Israel’s most vocal critics, especially in my own LGBT community, who seem unwilling to address those aspects of the conflict that do not comport with their theories, or to forthrightly state the assumptions that underlie their critiques. There is a place in public discourse for rigorous and radical critique of oppression, imperialism and politics. Yet the critical eye must be turned inward, as well.