From Azerbaijan to Silicon Valley and Back 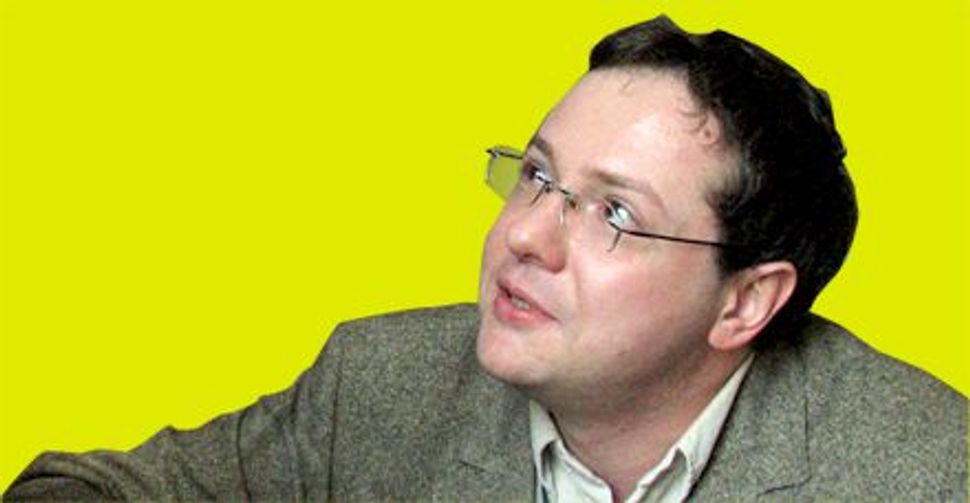 Image by Courtesy of Alexander Ilichevsky 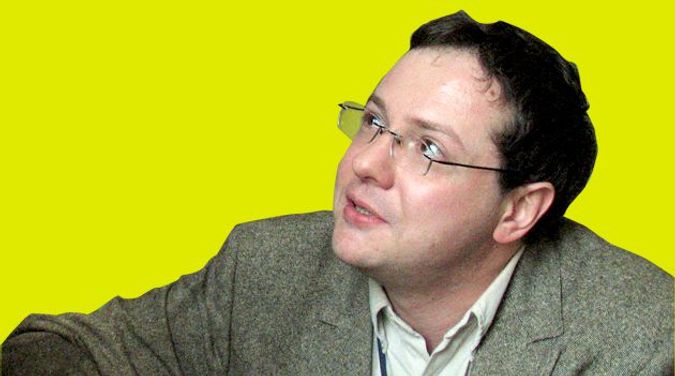 Gentle Anarchist: Ilichevsky is disappointed by Russia, but optimistic for the future. Image by Courtesy of Alexander Ilichevsky

Alexander Ilichevsky is a former student of one of Moscow’s top mathematical high schools, and he looks the part. Polite and soft-spoken, with a solid build and boyish features, the Russian author is most noticeable for his careful turns of phrase and his preference for precise definitions. After graduating from boarding school no. 18, affiliated with Moscow University and originally designated for talented children from the Soviet provinces, Ilichevsky studied theoretical physics at the renowned Moscow Institute of Physics and Technology. He later continued his graduate studies at the Weizmann Institute, in Rehovot, Israel, and worked as a software developer for Intel in California’s Silicon Valley. So far, so exemplary for a bright and diligent Russian Jew.

But in 1998, Ilichevsky left his parents in San Francisco and returned to Moscow to embark on a new career in literature. While still in California he had begun writing poetry — his first collection was published in 1996 — and he felt that he had been “wasting his most interesting time” working on computer programs. A dozen books later, Ilichevsky has been published by Russia’s most important presses and has been presented with the country’s most prestigious literary awards. These include the Russian Booker Prize, which he won in 2007 for his novel “Matisse,” and second place in the 2010 Big Book competition for “The Persian.” Both works are being brought out in 2013 in German and French, though they have yet to be translated into English. His latest novel, “The Anarchists,” has just been published in Russian.

Along with the two earlier works, as well as “The Mathematician,” which came out in 2011, “The Anarchist,” completes a tetralogy of novels. Each book tells the story of a man who overcomes an existential personal crisis by abandoning his “normal” lifestyle to join a real or imaginary community of people choosing to exist outside of established social norms. In “Matisse,” Ilichevsky traces the transformation of a successful theoretical physicist into a homeless vagabond, while “The Mathematician” follows a Russian-born Princeton University mathematics professor through a mental crisis that takes him from a San Francisco pizza parlor and lands him at the Tian Shan mountains on the border between Kazakhstan and China. In “The Anarchists,” Ilichevsky skillfully imitates the realist style of 19th-century Russian novels, beginning with a portrayal of idyllic country life, but also shows how that life deteriorates and eventually collapses under the pressures of contemporary Russia.

Ilichevsky draws on his own life story for his fiction, as well as on a fascinating family history. He was born in 1970 and raised in the industrial town of Sumgait, near the city of Baku in the former Soviet republic of Azerbaijan. In the mid-19th century, Baku became the world’s first center of oil production, attracting people and capital from all over the world. At the same time, the czarist regime used the remote region as a place of exile for so-called undesirables. These included members of such religious sects as the subbotniki, or gery, a movement started in the mid-19th century in the villages of central Russia. Influenced by the Old Testament, ethnically Russian peasants who had never seen a Jew in their lives refused to worship icons, rejected the Christian dogma of the Trinity, and began to observe the Sabbath and kashrut. In the southern parts of today’s Azerbaijan, near the Iranian border, they built several prosperous villages where they could practice their faith, and where they stayed until 1991, when they were forced out by the newly independent and virulently nationalist Azerbaijan.

Ilichevsky has ancestors among Ashkenazi Jews who came to the Caspian shores both before and after the Russian revolution, and among the Russian gery. In Soviet Ukraine in the 1930s, his strictly observant maternal gery great-grandfather found refuge from anti-religious persecution among his co-religionists in Azerbaijan. Another paternal great-grandfather, less pious but ethnically Jewish, left Baku in 1914 and traveled through Iran and China to Japan. In 1920 he finally landed in California, where he indicated the name of his American contact as Mr. Neft, meaning “oil.” At a June panel discussion in New York as part of the Read Russia literary initiative, Ilichevsky recalled how his grandmother’s unusual dialect and talent for creating neologisms “led me to how I write today.”

This rich and diverse family background supplies Ilichevsky with a wealth of material for his fiction, particularly in “The Persian,” a 650-page intellectual thriller situated around the Caspian Sea at the turn of the millennium. In the novel, an Ilichevsky-like narrator comes back to his native Baku from California to reconnect with a childhood spent around the oil fields, and to discover the universal ancestor of all life on earth, which he believes is hidden somewhere in the depths of the Caspian oil repository. The book’s adventurous plot includes such highlights as the assassination of Osama bin Laden by American forces in the remote Pakistani mountains, depicted by Ilichevsky in vivid detail two years before the actual event.

Throughout his work, Ilichevsky puts his broad erudition to good use, filling his books with learned discussions on topics ranging from geophysics to ornithology to the history of the Russian avant-garde and Islamic theology. In “The Persian,” one of the main characters is Hashem (any association with the Hebrew word for “God” is probably arbitrary), the son of an Iranian secret police officer who finds refuge from the Islamic Revolution in the Soviet Union. Later, after the fall of the USSR, he becomes the supervisor of a remote abandoned nature reserve in the Shirvan region of Azerbaijan. There he doubles as a Sufi sheik and a commander of a paramilitary unit named after the Russian futurist poet Velimir Khlebnikov, an eccentric genius who served in 1921 as a commissar in the short-lived Soviet Republic in northern Iran.

Though the commercial success of Ilichevsky’s writing seems surprising given its unabashed intellectualism, baroque style and complex composition, the popularity of this writer’s books can be explained by the energetic pace of their narratives and the adventurous thrill of their plots. Usually, however, those plots are also a cover for deeper philosophical investigations into the relationship among humanity, history and nature. One of Ilichevsky’s key symbols is oil, which is both a precious commodity and a repository of the oldest forms of life.

Given the centrality of oil to the Russian economy and politics, it is not surprising that it fascinates the imagination of contemporary Russian writers. These include the pre-eminent postmodernist Viktor Pelevin, known to the English-speaking reader for such novels as “Homo Zapiens” (1999) and “The Helmet of Horror” (2005), as well as writers of pro-Putin agitprop, such as Marina Yudenich, whose fiction pretends to expose an American conspiracy against Russia, led by an oil tycoon (easily recognizable as Mikhail Khodorkovsky) as its agent. For Ilichevsky, who was born and raised in a town soaked in oil and its products, the substance carries personal significance, as well.

Ilichevsky left Sumgait with his parents in 1984, six years before violent anti-Armenian pogroms shattered to pieces the official Soviet concept of “Friendship of the Peoples.” “It became clear that one had to run away,” Ilichevsky told me during a conversation in March at the editorial office of Lechaim magazine in Moscow’s Maryina Roscha district, once one of the city’s biggest Jewish suburbs. Ilichevsky shares a modest office there with his landsman from Baku, the writer Afanasii Mamedov, and for a few hours we talked about the good and not-so-good old days in multicultural and multinational Soviet Azerbaijan.

“It was sheer horror,” Ilichevsky recalled of the anti-Armenian violence. “When I visited Sumgait the next summer, as a young man I simply wasn’t able to comprehend what happened.” The experience stayed with him. “I had to finish up with this story, and by writing ‘The Persian’ I have finally freed myself from it,” he said. “The Persian” is both a return to the idyllic state of happy childhood and a realization that one’s personal story stands at the intersection of deeper, “metaphysical, geo-political and geo-poetical meanings.”

Though Ilichevsky’s view of contemporary Russian life and politics is gloomy, he remains an optimist. His fiction is inspired by the ideas of the past, but today it resonates strikingly with the emerging culture of the Occupy movement. Unlike some critics who argue that the new opposition in Russia has neither a unified program nor leadership, and can therefore be disregarded as a mere nuisance, Ilichevsky believes that the lack of conventional organization and hierarchy is a great advantage. In the future, he argues, state authority will be replaced by “an intelligent union of autonomous personalities,” similar to the “horizontal anarchic structure” of the Internet.

Among Ilichevsky’s works in progress is a travelogue based on his recent trip to Israel, which he revisited after more than a decade. Fragments of the book that were published online reveal the same fascination with nature, a deep connection to the soil and a utopian belief in the power of anarchy. For Ilichevksy, it’s a unique mixture based on an unusual life, as well as an inheritance from adventurous and idealistic ancestors.

Mikhail Krutikov grew up in Moscow and now teaches Slavic and Judaic studies at the University of Michigan, Ann Arbor. He also writes a weekly review column for the Forverts.

From Azerbaijan to Silicon Valley and Back