Crohn’s Is on the Rise Among Children 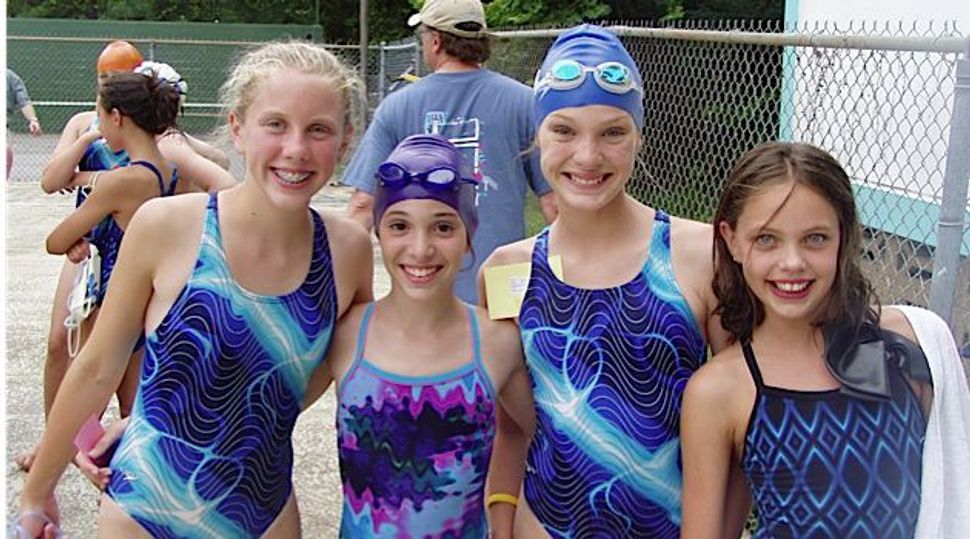 Kate Goldbaum (center left) weighed only 85 pounds as a 14-year-old; she put off taking ?biologics.? Image by courtesy kate goldbaum

Last February, on a warm day in North Carolina, Dr. David Wohl entered the playground and saw his eight-year-old son, Zac, sitting motionless in the sandbox. “He looked like a 90-year-old guy who had fallen and couldn’t get up,” said Wohl, an AIDS expert and associate professor of infectious diseases at the University of North Carolina, Chapel Hill.

A few days later, after Zac was gripped by multiple intensive stomachaches, he was rushed to the hospital. “He was having 15 to 20 bellyaches a day. His grandmother could tell something was wrong by just looking at him,” Wohl said.

Zac was diagnosed with Crohn’s disease, a lifelong inflammatory bowel disease (IBD) that affects about 1.4 million Americans, most often Caucasians — and, even more often, Ashkenazi Jews. Studies have shown that as many as 317 of every 100,000 North Americans have Crohn’s disease, but among the Ashkenazi Jewish population, it is two to four times more prevalent. And for unknown reasons, it’s on the rise, among children in particular.

Although the doctors could diagnose Zac, they were unable to cure him: Crohn’s currently has neither a clear-cut cause nor a treatment. “IBD is not a one-size-fits-all disease,” said Dr. Sandra Kim, assistant professor of pediatrics at UNC School of Medicine and chair of pediatric affairs at the Crohn’s and Colitis Foundation of America. “Just because a treatment works on one kid does not mean it will have the same effects on another. Kids with IBD also have unique characteristics that are different from adults.”

With no standard path of treatment, Zac’s family was left with lots of decisions, none of them easy. “There was a lot of handwringing, because the doctor doesn’t tell you explicitly what you should do,” Wohl said. “She lays out all of the options, but you have to make the decision yourself. One of the drugs recommended to us carries the possibility of fatal lymphoma; another has toxic effects on child development. It was heart-wrenching.”

When Zac’s gastroenterologist, Kim, asked the family in April if they wanted to enroll Zac in a nationwide pediatric Crohn’s research study, Wohl did not hesitate. The study, known as the Pediatric RISK Stratification Project (RISK) — overseen by the Crohn’s and Colitis Foundation in partnership with 29 medical centers — is not testing a treatment. Rather, it is assembling, through blood and stool samples, the largest ever database of information from children with IBD. Since 2008, it has enrolled more than 1,740 children, with the goal of creating individualized patient profiles to better predict who is at risk for the severest form of the disease and which drugs will work best with whom. “The hope is that we can develop a model that will allow us to predict how a child’s disease will progress, or how they will respond to certain medications,” said Kim, who oversees the RISK study at UNC.

For many years, the only treatments for IBD were anti-inflammatory medications, such as sulfasalazine and mesalamine, which try to reduce symptoms by targeting the inflammation. But they often didn’t work well on the patients most severely affected and came with a plethora of side effects, such as nausea, diarrhea and insomnia. While corticosteroids remain a popular choice for short-term remission, pediatricians are particularly hesitant to prescribe them to adolescent patients because they can lead to stunted growth.

Another class of drugs, immunosuppressives, works by tamping down the immune system, thus alleviating the body’s fight against itself. Only one such drug, Purinethol is still regularly used, with varying levels of efficacy.

Alternatively, patients and their doctors try to control flair ups through special diets.

The most aggressive treatments are called biologics — intravenous infusions that target the immune system through a new mechanism: by binding to and suppressing a protein produced by the immune system known as Tumor Necrosis Factor (TNF). The anti-TNF biologic disables TNF in the bloodstream before it can damage the intestines. The infusion is administered every six to eight weeks and is a lifelong commitment: If you miss a treatment, the body may build up a resistance to the drug, rendering it ineffective.

Further complicating matters are the risks of the biologics for some patients. Cyclosporine has the potential for kidney and liver damage; methotrexate shouldn’t be used during pregnancy; natalizumab is associated with a rare brain infection. Yet these drugs are sometimes the only options for Crohn’s patients to regain their quality of life.

“Right now, at the time of diagnosis, we don’t have a reliable way of predicting who is going to become complicated and who isn’t,” said Dr. Jeffrey Hyams, director of pediatric gastroenterology at Connecticut Children’s Medical Hospital in Hartford and a participating physician in the RISK project. The study, he said, should provide such information and “allow us to better predict how people will react to the medications that we have; specifically, the newer medications.”

Kate Goldbaum, 19, a sophomore at UNC-Chapel Hill who was diagnosed with Crohn’s in eighth grade, tried a slew of therapies before consenting to be treated with a biologic, Remicade.

“It’s scary to commit to getting an infusion every seven weeks for the rest of your life when you are 14 years old,” said Kate, “and I prolonged treatments that weren’t helpful for longer, because I didn’t want to commit to it.” But as a high-school senior, she relented, and for the first time in three years, she remembered what it felt like to not be in pain. “I would never change my decision. I don’t have any symptoms anymore; there are so many things that I suddenly have the energy to do.”

Since starting the Remicade, Kate has developed mysterious rashes, had her hair fall out and was diagnosed with mononucleosis. It’s not known if there is a connection between these ailments and her infusions. “Things happen, and you don’t know why they happen or why they get resolved,” said Kate. “But that is part of living with a chronic disease. It is never as black and white as you want it to be.”

According to Kim, cases of young children suffering from intestinal inflammation have been growing “across the board. We are seeing kids who are younger and more difficult to treat, because they are sicker and have more complications, and so doctors are moving more quickly to prescribe the biologics,” Kim said. “I wonder about the impact of being on such aggressive treatment so early on in life, when your body is still in development. And what happens when they are young adults, or if the medications stop working?” Kim has diagnosed patients as young as 12 months old and has placed children on biologics as young as three years old. Most recently, a two-year-old patient’s family opted for intestinal surgery.

“When you sit there in an office, with a child, and the family is weeping, it is beyond unbearable. My hope with RISK is to be able to minimize the pain these kids have to go through, both physically and emotionally,” she said.

Wohl, who was hesitant to put Zac on a risky medication at such a young age, opted for a special diet given through a feeding tube, which calms the troubled intestines and reduces inflammation. The feeding tube, applied through Zac’s nostril, brought him into remission within eight weeks. Though it is no longer in consistent use, his family plans to continue it at night, in the privacy of their home, until they can find a more suitable treatment. “There are things that you can do with an 8-year-old that you can’t with a 15-year-old,” said Wohl. “This works great for right now, but we have to be prepared as he grows up that walking around with a feeding tube may not be an option. We are hoping that there will be a cure by then.”

The AIDS specialist sees parallels between the HIV epidemic of the 1980s and Crohn’s disease and says Jews should claim ownership of the disease that affects them so disproportionately. Said Wohl, “I really feel strongly that we need the kind of advocacy that HIV had, to rally together behind this and figure out a cure.”

Crohn’s Is on the Rise Among Children