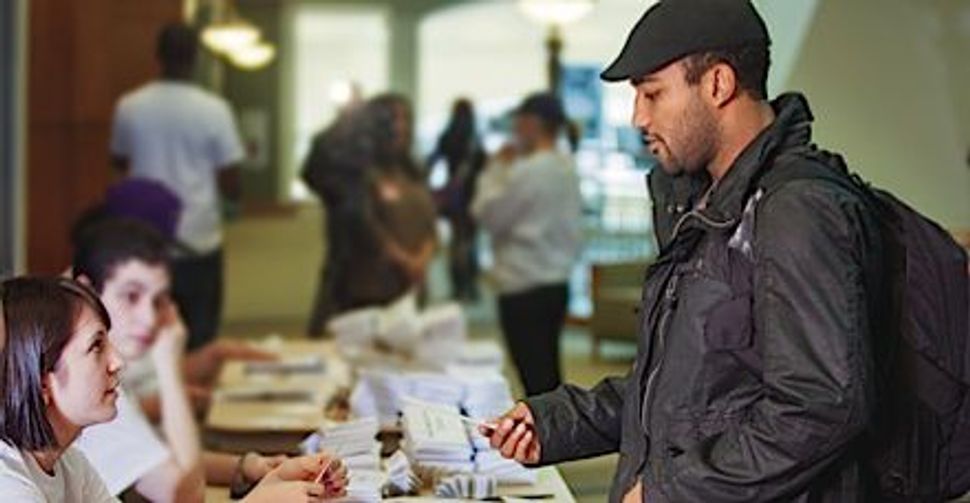 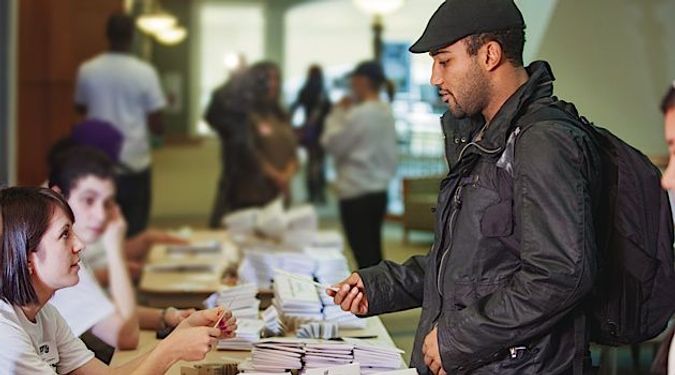 For Ohio University senior Lauren Kahn, the most significant test of her college career wasn’t a term paper or a final exam. It was a quick swab on the inside of her cheek her sophomore year, an easy, painless way to gather genetic information for a national database of potential bone marrow donors.

On February 25, 2009, Kahn was one of over 2,500 people who participated in the “Got Swabbed?” drive organized by Ohio’s Hillel, where dedicated interns and volunteer students run one of the most active campus swabbing efforts in the country. The idea is to raise awareness about the need for volunteer donors, especially those of Jewish ancestry. Ohio, now one of 88 campuses partnered with the Gift of Life Bone Marrow Foundation, is a “superstar campus,” says Jay Feinberg, the foundation’s executive director.

Since the beginning of “Got Swabbed?” in 2008, Ohio’s bone marrow drives have registered over 5,500 students, both Jewish and non-Jewish. Some 200 were contacted as potential matches, and 13 of them ended up donors. Including, just over two years after she scraped her cheek, Lauren Kahn.

Involvement with Hillel at Ohio seemed natural for Kahn, now 23, who grew up attending Jewish day school in Cincinnati and spent six months before college volunteering at an Israeli nature preserve and preschool. Equally obvious was the decision to throw her genetic hat into the ring when the opportunity presented itself. 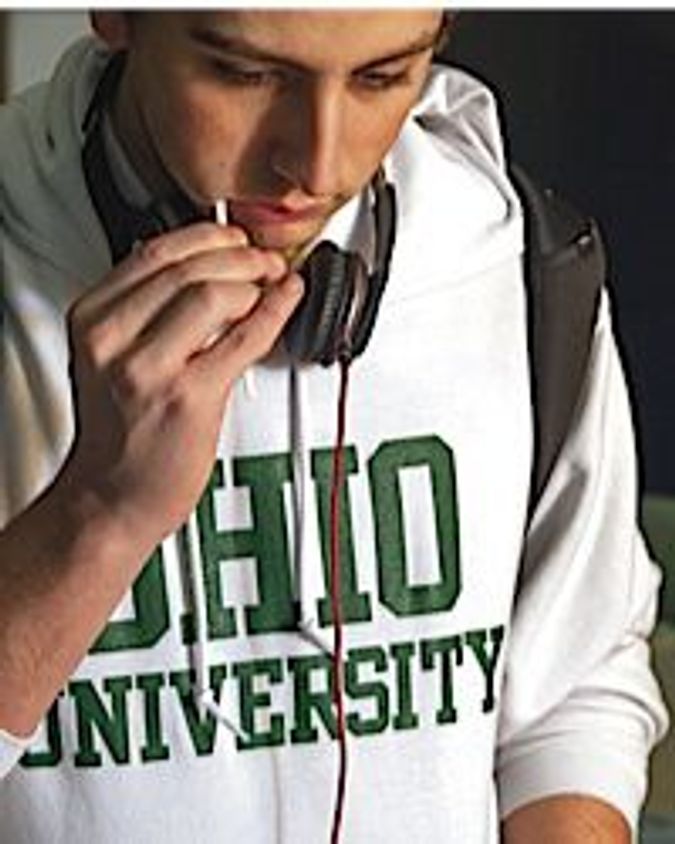 “Everyone cares when you hear about kids getting sick,” she says. The simplicity of the test — a cotton swab in the mouth that removes a slight amount of tissue — was a relief for Kahn, an admitted needle-phobe. And the chances of being contacted as a donor — about 1 in 60 for those registered through Hillel drives — seemed only a distant possibility. Even then, more tests would be needed to verify that her marrow, the spongy material inside bones that helps manufacture blood cells, was genetically similar enough to avoid igniting an immune response in a patient with a disease such as leukemia or multiple myeloma.

With her sample collected, labeled and filed away with her contact information, Kahn joked to a friend that with her luck, she would end up a donor.

As luck would have it, she was right.

Finding a bone marrow donor is a race against time and nature. Patients and doctors search for — and hope for — a close genetic match that will replace the sick cells and integrate seamlessly with the recipient’s body. Close family members are easily testable but have only about a 30% chance of matching. Since tissue type is inherited, a stranger of the same ethnic background may be a fit — but will only turn up if his or her genetic data is on file with a donor registry.

“It’s the needle in a haystack,” says Feinberg, whose organization has been a strategic partner with Hillel since 2004.

Feinberg speaks from experience: He was diagnosed with leukemia at age 22, but with Jewish donors widely under-represented, his doctors were blunt about his chances for survival.

“They told me to prepare my bucket list,” Feinberg, now 43, says. Instead, he and his family organized over 250 drives to screen for a match. After registering 60,000 people, Feinberg finally found a donor and received a transplant in 1995.

His foundation, launched in 1991 as Friends of Jay and named Gift of Life Bone Marrow Foundation in 1996, has grown to a nationwide organization that pioneered the use of swab tests and broadened its search to donors of all backgrounds.

Still, Feinberg calls the partnership with Hillel, the national organization for Jewish college students, “a no-brainer.”

Students involved with their campus Hillel make particularly strong donor candidates for Gift of Life, given their youth (though they must be at least 18), health and greater likelihood of having a similar genetic profile to Jewish patients needing bone marrow transplants. But beyond the bare facts of biology, students at Hillels across the country have proven to be particularly enthusiastic about spreading the word.

Although two interns are hired by the Ohio program each year, trained by Gift of Life staff and given Hillel’s resources and support, the program’s success is due largely to the creativity and motivation of the hundreds of student volunteers at the 21,000-student campus in Athens, Ohio, says Rabbi Danielle Leshaw, executive director of its Hillel. Interns are expected to run at least five “mini-drives” over 13 weeks in such places as student centers, dining halls, large-scale lectures and theater and film events. Between drives, the interns use a dedicated office at the Hillel house to store thousands of swab kits and send back hundreds of completed samples to Gift of Life on a weekly basis.

After their genetic sample is processed by Gift of Life, potential donors confirm by email their contact information and their interest in donation, a step that Feinberg sees as crucial to ensuring that potential donors understand their commitment. If a doctor requests a sample and a donor backs out, “it can give false hope,” says Feinberg. 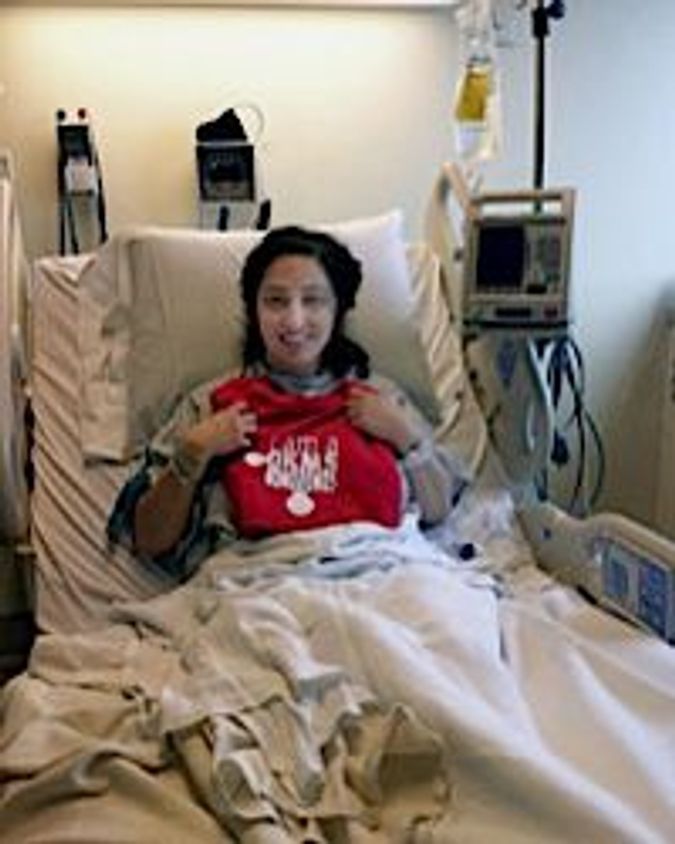 She Swabbed at School: During senior exams, Lauren Kahn donated bone marrow to a two-year-old. Image by Courtesy Lauren Kahn

Although Kahn says she “immediately started freaking out” when she got the call late in her senior year, there was no question over whether to proceed. “There was an immediate connection to my Judaism. I grew up learning about this, about tikkun olam,” Kahn said. “I thought, ‘I have to do this. This is a little girl.’” A girl so little that she was not yet born on the day Kahn’s cheek was swabbed two years before.

Knowing only that her potential recipient was young and suffering from leukemia, Kahn agreed to undergo a confirmatory blood screening for infectious diseases and to check the compatability of her immune system proteins — the human leukocyte antigens.

A self-described “ball of anxiety,” Kahn packed up her room, took her finals early, turned in papers late and rearranged a vacation so that she could fly to Pittsburgh to undergo the donation procedure.

Although most donors are able to give through a four-to-six-hour process called peripheral blood stem cell, or PBSC, in which blood from one arm is filtered for stem cells before returning to the body through the other arm, Kahn’s donation was by needle aspiration through her hip, a process where bone marrow cells are extracted under anesthesia. After her 6 a.m. wake-up call, Kahn was nervous but resolute, and remembers a “huge feeling of relief” when the surgery was over, an hour and a half later. “I didn’t even think about the pain. It was just, Yes, I did this.”

It takes two to three weeks for a donor’s body to replenish the cells. After a month, Kahn was fully recovered and received word that the girl, who now shared a little part of her, was struggling but had accepted the marrow. With the child’s identity kept private, Kahn later wrote the girl’s family a letter, delivered through the registry, to express the overflow of emotions that came with her donation. “I told them, ‘Before, I was just a college student, worried about classes and loans, but now I know the problems in my life are so insignificant.’”

It’s stories like Kahn’s that help fuel the “Got Swabbed?” drives. “We’re trying to create a culture where very few people are not aware,” said Leshaw, adding that when a match occurs, “We’re incredibly proud and happy. The energy takes off.”

For Kahn, who graduated with a degree in multicultural studies and a certificate in Jewish studies, the experience caused her to reevaluate her attitude towards family and faith.

“I’m grateful for my Jewish education,” Kahn says. “It’s one thing to learn about doing mitzvahs and another to have the opportunity. I didn’t choose to be a match, but I chose to be a donor.”

Though she used to find her father’s funeral home business in Cincinnati “depressing,” she now plans to work with him. Confronting a real life-and-death situation through her donation was an epiphany: “My community needs me. I can help people here.”