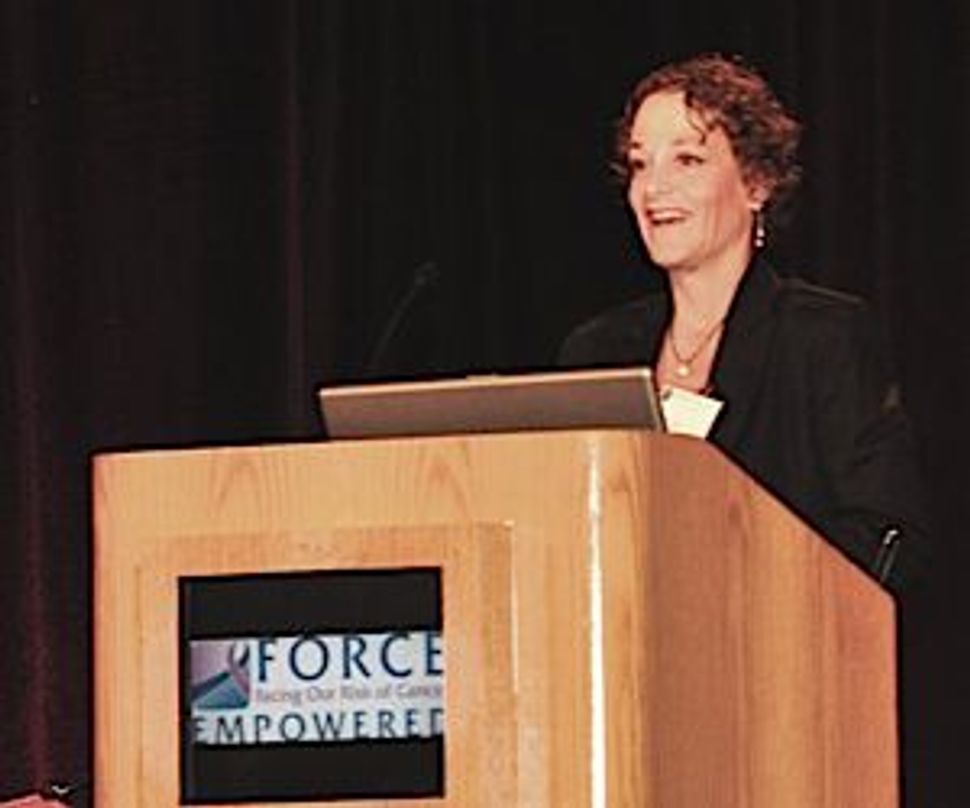 Sue Friedman: The founder of FORCE speaks at its annual meeting supporting those with BRCA mutations. Image by Courtesy Sue Friedman

Regulatory hurdles, along with dosing problems, have come to plague a new class of cancer drugs that showed highly encouraging results in early research. Those obstacles have frustrated breast and ovarian cancer patients who are carriers of cancer-causing mutations, particularly prevalent among Ashkenazi Jews, and for whom it was hoped the medicines would prove especially helpful. 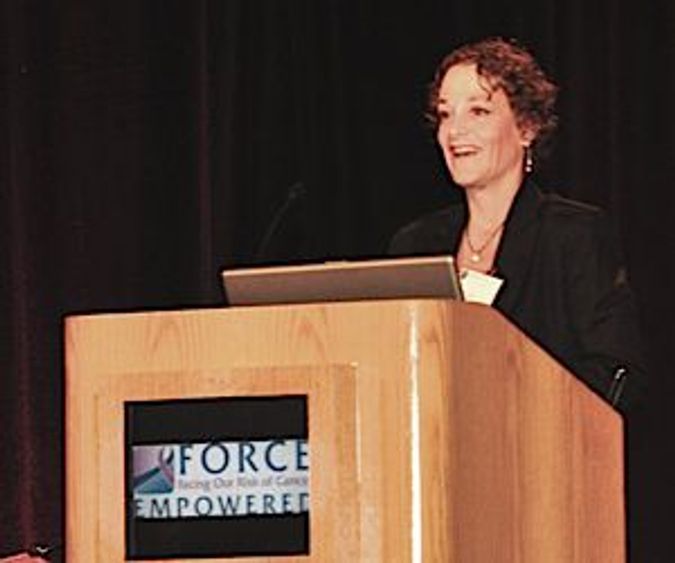 Sue Friedman: The founder of FORCE speaks at its annual meeting supporting those with BRCA mutations. Image by Courtesy Sue Friedman

Last December, patients eagerly anticipating the completion of trials and FDA approval of Olaparib — then the farthest along in research involving a novel class of therapies called “PARP inhibitors” — were dealt a blow when maker AstraZeneca announced it was, for the time being, discontinuing its late-stage Phase III trial of the drug on patients with serous ovarian cancer, the most common form.

The pharmaceutical company said that Olaparib’s previously reported impressive ability to halt progression of the disease for a time, with limited side effects, would not likely translate into “overall survival benefit,” or the length of time patients live after starting the drug.

No PARP inhibitors are currently in large-scale Phase III trials — the last stage of testing before a company can win FDA approval. But multiple Phase I and II trials are underway. Some early trials indicated that the drugs might prove particularly effective in patients with the inherited BRCA1 or BRCA2 genetic mutations involved in 5% to 10% of all breast and ovarian cancers. With about a one-in-40 chance of carrying a BRCA mutation, Ashkenazi Jews are at higher risk for those diseases compared with those in the general population, where about one in 500 carry a BRCA mutation.

Some academics view the delays in PARP trials as reflective of a contentious change in regulatory policy, regarding how new drugs are evaluated. Dr. Mary Daly, who chairs the department of clinical genetics at Fox Chase Cancer Center in Philadelphia, said: “The move is to thinking that it is not enough to put off progression with a drug, but that the drug has to actually extend life. It’s still somewhat controversial, because some argue that prolonging progression-free survival is valuable in itself.”

Olaparib researchers also reported difficulty in identifying a suitable tablet dose for use in a Phase III trial. AstraZeneca is currently reformulating Olaparib into higher-dose capsules, but the process may significantly delay completion of the clinical trial.

“Patients were having to take lots of pills a day to get the appropriate dose,” said Dr. Kristin Zorn, a surgical oncologist at Magee-Womens Hospital of UPMC in Pittsburgh. Zorn is a principal investigator for a study involving Veliparib, a PARP inhibitor being developed by Abbott Laboratories. She said the ideal dose in her Phase II trial is turning out to be much higher than originally thought, but that the study is still enrolling ovarian cancer patients.

The PARP (poly ADP-ribose polymerase) enzyme fixes damage to cells, whether cancerous or not, allowing them to continue to multiply. By interfering with that repair process, PARP inhibitors such as Olaparib and Veliparib make it harder for cancer cells with an abnormal BRCA gene to repair themselves. As a result, the tumor cells accumulate DNA damage, leading to their death.

The potential benefit of PARP inhibitors for patients who carry a BRCA mutation has led to intense interest among this group. In January, breast cancer patients and their advocates were deeply disappointed when Sanofi-Aventis announced that the Phase III trial of its PARP inhibitor, Iniparib, had failed to achieve its “primary survival endpoints”— measurements at a study’s end to see if a given treatment worked. That trial focused on patients with newly diagnosed “triple negative” breast cancer, which does not respond to hormonal treatments.

“Three quarters of BRCA1 breast cancers, especially if [patients] are under the age of 50, are triple negative,” said Daly, adding that, for BRCA2 carriers, the numbers are about 20% to 25%.

Sue Friedman, a 14-year survivor of hereditary breast cancer, is executive director of Facing Our Risk of Cancer Empowered (FORCE), which advocates for those affected by hereditary breast and ovarian cancer. She has watched with frustration the fitful progress of these drugs and contends their stymied path to approval stems, in part, from the failure to design a trial focused solely on BRCA carriers, whom researchers initially had in mind when developing the medicines.

This decision “may have contributed to the fact that the larger studies didn’t meet their primary endpoint,” said Friedman. “My concern is that it may be a while before other companies will develop a new therapy for this community because of the challenges that have been facing PARP inhibitors.”

Zorn, however, contends that large-scale studies with both BRCA carriers and non-carriers will yield the greatest dividends. “We don’t know that the population with BRCA mutations is the only one that benefits from PARPs. We all win if we identify the largest possible group of patients who benefit from a practical standpoint; a pharma company is less likely to pursue FDA approval if only a small select group of patients are candidates.”

She continues to be optimistic about the research, particularly in its value for ovarian cancer, a disease for which there is no effective maintenance medicine since patients invariably become resistant to the treatments. Every year nearly 14,000 women in the U.S. die of the disease.

“Although the path to approval has become much more complicated,” said Zorn, “the value of what we have learned is undiminished.”

Karen Iris Tucker is a freelancer who writes about health, culture and entertainment.Contact her at [email protected]