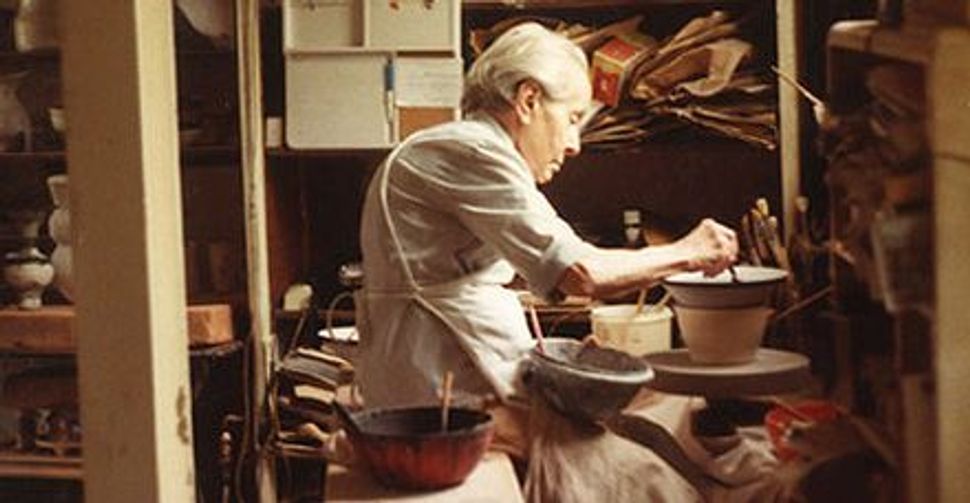 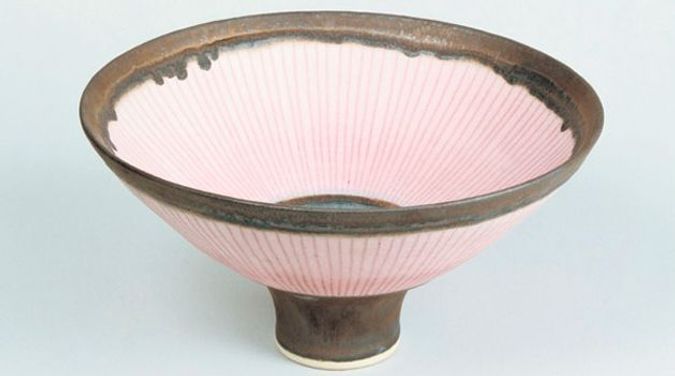 Vienna-born potter Lucie Rie, who is the subject of Emmanuel Cooper’s biography “Lucie Rie: Modernist Potter,” shows how a Jewish artist can express Yiddishkeit in creativity despite repeated assimilations. Rie, who lived from 1902 to 1995, was the daughter of Dr. Benjamin Gomperz, an ear, nose and throat specialist and a friend of Sigmund Freud. Gomperz decorated his consulting rooms in exuberant Jugendstil (art nouveau) designs.

Rie’s maternal uncle was art collector and historian Sándor Wolf, who immigrated to the Holy Land in 1938 after the Nazis seized his collections. He died in Haifa in 1946. Wolf had taken his niece on grand tours of Europe to admire art masterpieces, as well as on a 1923 trip to Palestine, where she observed the millennia-old local tradition of pottery, only one year after she had first tried the potter’s wheel as a Vienna art student. Sometime after her trip to the Holy Land, when Rie told parents she was planning to fast for Yom Kippur, Gomperz wrote to his daughter:

“I am very much for piously respecting old traditions and customs — it is an exercise of the character — but the rule of 24-hour fasting does not have to be followed under all circumstances… fast as long as you feel well; but when you get dizzy, take a little snack. You are, after all, an anemic girl and mustn’t be harmed by fasting… you serve the commandment even if you have fasted for less than 24 hours.”

Despite their prosperity and privilege, the family’s assimilation into Austrian society was incomplete. A 1987 book, “Lucie Rie” by Tony Birks, notes how Lucie’s beloved artist brother, Paul Gomperz (1898–1917) joined the army during World War I “to avoid being called a ‘Jewish coward.’” He was killed on the Italian front, and Rie’s survivor guilt was augmented by further losses during the 1918 flu pandemic, notably that of the Austrian painter Egon Schiele, whose work she much admired. In 1927, Gisela Gomperz, Rie’s mother, wrote to her daughter during a skiing holiday in Obladis, Austria, praising the Tyrolean scenery “if one does not mind the anti-Semitic tendencies there.” In a 1934 letter, her mother added, “One hears a lot about the Nazis, but one doesn’t see them; bunch of blackguards, I must say.”

Decades later, Rie would tell a journalist: “I never liked the Viennese people. They were jealous, not goodhearted, and most of them were Nazis.” After her pottery had received many solo exhibits around the world in the postwar years, Rie still refused to show her works in Austria, responding to any such proposal with, “Only when I am dead.”

After the Anschluss, from which she unsuccessfully sought distraction by reading Margaret Mitchell’s “Gone With the Wind,” Rie fled to London. There she relied upon a network of émigré Austrian Jewish friends to find clients, and sought out an appropriate pottery studio as part of a decades-long successful quest to become an English artist who nevertheless retained her original identity.

Once Rie had purchased a home in Albion Mews, Bayswater, that also served as her studio, her friend, Freud’s architect son, Ernst Freud, fashioned living and working spaces inside it. In 2009, Rie’s studio would be reconstructed in London’s Victoria and Albert Museum. In Albion Mews, Rie behaved like a well-brought-up English lady, observing with religious fidelity the ritual of consuming afternoon tea and cakes. She worked in total silence, with improbably neat and pristine precision. Cooper, a frequent visitor in later years, said, “I was amazed to see that when [Rie] stepped down from the wheel, she was as clean as when she got on it.”

Even Rie’s artworks could seem British in their severe reticence, withholding exuberant expression in favor of stillness. Her creations could appear to be concise artistic summations, offering concentrations of entire cultures and civilizations. Sophisticated and refined, Rie’s work played with Asian as well as Near Eastern prototypes, using intricately labor-intensive designs, sometimes stretching the clay extremely thin for ethereal effect. While often using restrained earth shades, Rie could also splash around color, including burnished bronze, gleaming yellow and exquisite turquoise.

Unlike other potters of her era in England, such as the ultra-famous Bernard Leach, Rie rejected the notion of ceramics as a rustic occupation or a return to rural ideals. She was very much a city potter, and what she produced reflected the modern urban architecture of her youth in Vienna as well as postwar abstract art styles. Rie was privately outspoken about her likes and dislikes, such as her admiration of Freud and dislike of his grandson, painter Lucian Freud, the latter perhaps because of his notoriously bellicose behavior as much as for his blunt, coarse-brushed painting.

But as for Sigmund, whether sitting on his knee as a girl or receiving his thoughtful words of consolation after her father’s death, Rie considered the founder of psychoanalysis to be a tactful and understanding family friend. After Rie received an Order of the British Empire insignia in 1968 — she was made Dame Commander of the Order of the British Empire in 1991 — she returned home, complaining about the “standard of conversation at Buckingham Palace.”

Rie’s own conversation could be enigmatic, especially when the subject was her own art. In the 2000 book“Modern Pots: Hans Coper, Lucie Rie and Their Contemporaries,” by Cyril Frankel, she was quoted as saying:

There seems to the casual onlooker little variety in ceramic shapes and designs. But to the lover of pottery, there is an endless variety of the most exciting kind. And there is nothing sensational about it, only a silent grandeur and quietness…. Art theories have no meaning for me, beauty has. This is all my philosophy. I do not attempt to be original or different. Something which to describe I am not clever enough moves me to do what I do.

Despite such apparent modesty, Rie could be outgoing and energetic in defending friends, especially Hans Coper (1920–1981), a German-born potter whose Jewish father was driven to suicide in 1936 by Nazi persecution. Coper fled to England in 1939, and after internment as an enemy alien and deportation to Canada he finally returned to London, where he greatly inspired Rie with his sculpturally exuberant pottery. The two would create many works in tandem, and Coper became one of a series of men who were emotionally important to Rie after her short-lived marriage to a Jewish businessman, Hans Rie, failed. Always alert to promote Coper, Rie wrote a letter to an art critic around 1980, slating a catalog essay about her friend; she pointed out that Coper had arrived as a refugee in London “before the war not after, you make him a Nazi with your wrong dates, He is rather anoyed [sic] about it — and I with him.”

Such plain speaking was the most un-British element of Rie’s personality, and a review of the United Kingdom edition of Cooper’s book accused Rie of being “dauntingly rude.” Even so, Rie will surely be remembered as a major artist who, passionate about pottery, drew on her Jewish cultural background to achieve modernist design innovations to express new possibilities with clay.