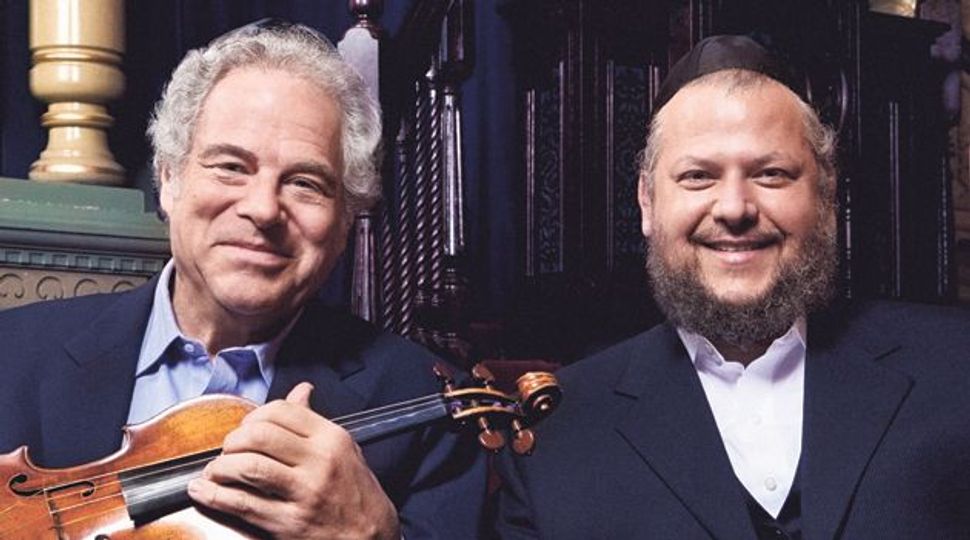 Few outside the world of cantorial music know the name Yitzchak Meir Helfgot, but when Itzhak Perlman listens to the Brooklyn-based cantor’s tenor, he gets goose bumps. Perlman, who has had a love of khazones, synagogue chants, since his boyhood in Tel Aviv, compares Helfgot to Plácido Domingo and Luciano Pavarotti, two opera giants with whom he has also recorded.

“Helfgot just opens his mouth and gold comes out,” Perlman declared during an interview with the Forward at his home in the Hamptons, while seated in an electric scooter in his spacious living room. “I love the timbre of his voice.”

Helfgot is a Ger Hasid who performs around the globe when he’s not serving as head cantor of Manhattan’s Park East Synagogue. He is widely considered to be the pre-eminent practitioner of the cantorial art alive today.

Listen to a podcast on the new album:

“What people get so excited about is that he’s a throwback to all the great cantors during the early 20th century,” said Russell Ger, the musical director at Park East Synagogue. “Suddenly out of nowhere, after generations of having great cantors but not with the weight and gravitas of the old guys, Helfgot emerges, and he has this voice that just stuns people.”

Perlman’s wife, Toby, who co-founded the Long Island-based Perlman Music Program with Suki Sandler to train young string musicians, first tipped off Perlman to Helfgot’s vocal abilities. She had heard her Bible class teacher rave about the cantor. When Itzhak Perlman was in Tel Aviv a couple of years ago to conduct the Israel Philharmonic Orchestra, he saw Helfgot perform with the orchestra the following evening. After the concert, the violinist made a point of going backstage to meet the cantor, and he proposed that they get together back in New York. Helfgot called it a dream come true to record with the man he considers “the high priest of music.”

Perlman brought in Hankus Netsky, leader of Boston’s Klezmer Conservatory Band and who worked on the violin virtuoso’s foray into klezmer music in 1995, to arrange and co-produce the “Eternal Echoes” CD, which was released September 4. Perlman, Helfgot, Netsky, members of the KCB and a 20-piece chamber orchestra recorded the album in Avatar Studios, where Bruce Springsteen recorded the album “Born To Run.”

Netsky called it the most thrilling experience he has had in a recording studio, and noted that the role Perlman played in the project was markedly different from the one he played with the klezmer bands he collaborated with in the wake of “In the Fiddler’s House,” a special that aired on the Public Broadcasting Service. Perlman and four American klezmer bands, including the KCB, the Klezmatics and Andy Statman, recorded two CDs — one in a studio and another before a live audience at Radio City Music Hall — and toured in North America and Europe. In that collaboration, Netsky says, Perlman was learning from the klezmorim. But in the project with Helfgot, Perlman ran the show.

“In this project we have a guy who grew up listening to khazones,” Netsky said. “He grew up singing this music, imitating the great cantors. He himself can sing these things.”

Helfgot says connecting with Perlman has given him a lot of kavod, honor. The 43 year-old cantor was born, like Perlman, in Israel. He moved to the United States in 2006. Helfgot knows hundreds, if not thousands, of Ger Hasidic songs and nigunim, or wordless melodies. But after the violin virtuoso listened to different versions of cantorial pieces that Helfgot proposed for the new record, the cantor deferred to Perlman’s choice of material.

“I’m sure any cantor working with Itzhak on a recording like this would not be trying to convince him [of what songs to include on the album], because he knows exactly what he wants,” Helfgot said. “I’m not saying I didn’t try at all. I tried to convince him to do bigger khazones, you know, like opera, but that is not what he wants here. He wants really pure, old tradition in everything: pure khazones, pure klezmer. And I think he’s right.”

Perlman selected a couple of pieces made famous by Yossele Rosenblatt, the giant of cantorial music’s golden age. The album includes “Shoyfer Shel Moshiakh” which was written by Avraham Goldfadn for the Yiddish theater and recorded by Rosenblatt, as well as “T’filas Tal,” a prayer for dew from the Passover liturgy that Rosenblatt composed and recorded.

Sometimes you listen to crossover recordings and it’s a stretch. I’ve made several recordings that you can term ‘crossover.’ I did some jazz, I did recordings of movie tunes for violin and orchestra. But it worked. Whatever I’ve done, I’ve done with the belief that it would work. I feel the cantorial material just naturally fits with the violin. It’s not a stretch.

The string section of the 20-piece chamber orchestra employed for the album includes Perlman’s former students from the Perlman Music Program. Netsky read English translations of the Hebrew lyrics aloud to the musicians so that they would have a sense of the material’s emotional intent. He thinks the orchestra members responded to Helfgot differently than they would have to a secular vocalist.

“It was not just a bunch of musicians in a room, listening and responding to the music itself. There was also the beliefs and devotion of Helfgot,” Netsky said. “When he sings these things, he’s expressing them as a Hasid, as a traditional Jew, not as a performer. And there was something about this that triggered responses from the musicians that were different.”

Perlman and Helfgot performed this material twice before recording it: once at a White House menorah-lighting ceremony and then at a benefit concert in Los Angeles. In 2013, Perlman, Helfgot, Netsky and company will perform at Boston’s Symphony Hall on March 3 and at the Tilles Center for the Performing Arts, on Long Island, on March 10. Other tour dates around North America are still being planned.