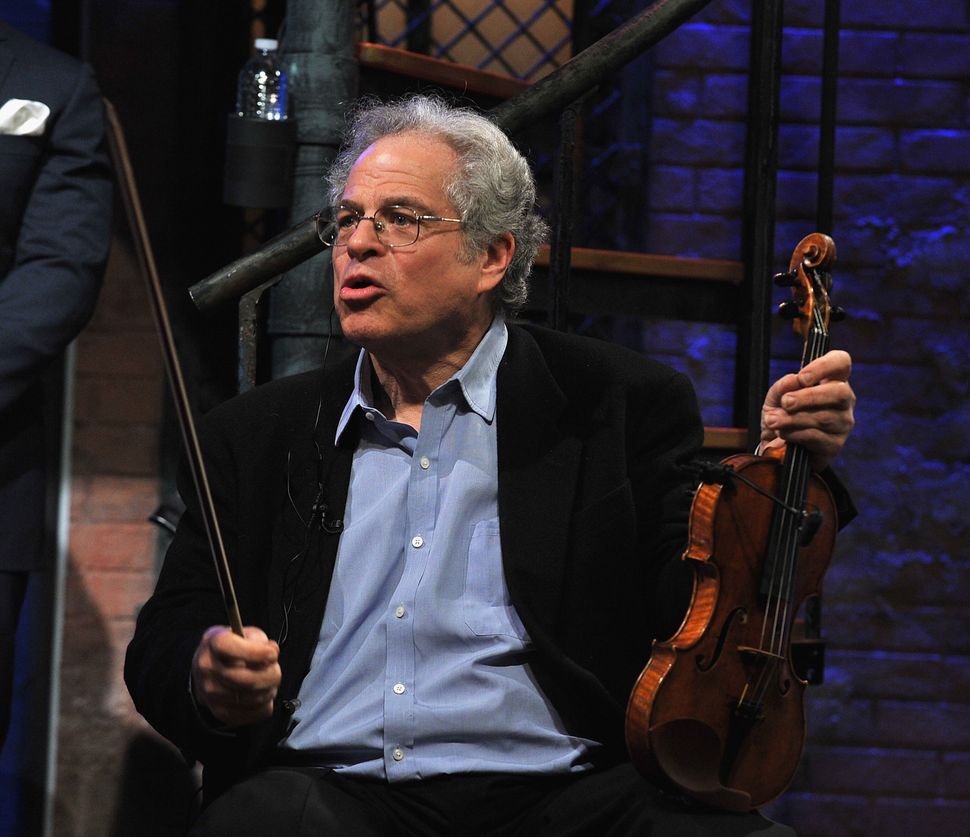 At Itzhak Perlman’s home on the East End of Long Island, the great violinist wakes up his MacBook to play back some khazones through a huge flat screen TV on the wall. As he flips through his iTunes collection and some YouTube videos, he recalls listening to such cantorial greats as Gershon Serota, Moshe Kousevittsky, Yossele Rosenblatt and an Israeli khazan named Leibele Glantz, who davened at the shul where Perlman had his bar mitzvah.

Growing up in Tel Aviv in the mid-1950’s. Perlman started listening to cantorial music on the radio. He was about 10 years old at the time.

“I remember the khazones hour was on shabbos,” he tells me. “The only entertainment we had in the house was the radio. There was no television, so the radio was on all the time. That’s how I got to hear my first recordings of classical music and cantorial music and later on, rock ‘n roll.”

Perlman plays me a YouTube video of Joseph Schmidt, a 4’ 9” Romanian Jew who made records and films before dying in a Swiss refugee camp during the Holocaust. Schmidt, Perlman explained, did some cantorial music but was too short to perform opera on stage.

“Listen to this guy. He had the most amazing voice,” Perlman says.

Scrolling through his iTunes library, he comes to “A Dudele,” a song composed by a chasidic rabbi in Ukraine named Levi Yizchok of Berditchev. The song ponders the intimate nature of his relationship with God and is one of the compositions on the New “Eternal Echoes” CD Perlman recorded with Cantor Yitzchak Meir Helfgot.

After pointing out that he performed “A Dudele” as an instrumental with an orchestra on his “Tradition” CD, the violin virtuoso observes, “A lot people did ‘A Dudele.’ I listened to Hirschman do it just this morning. Very beautiful. And there was one that was quite operatic done by Jan Peerce.”

After 15 minutes of playing old school khazones for me, the classical music superstar declared, “That’s all I got here,” and put his MacBook to sleep. He piloted his electric scooter outside and up a ramp to his van then drove me to the Long Island Rail Road Station. Just before dropping me off in front of a deli across the street from the station, Perlman told me about eating foie gras with matzah at a fancy restaurant in Switzerland. But that’s a story for another time.