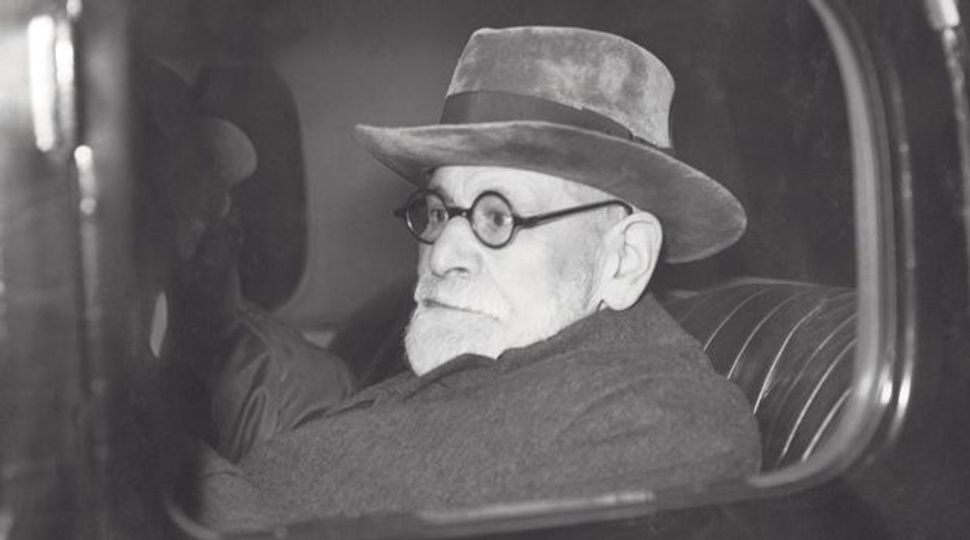 Through a Car Window, Darkly: Sigmund Freud arrives in London in 1938. Image by getty images

There is an old maxim that great men are seldom good men. Perhaps no figure of note invites speculation on this question so much as Sigmund Freud, the father of psychoanalysis. Perhaps because of the enormous changes Freud wrought in human self-perception (even the title “father” now seems loaded), admirers and detractors have worked overtime to resolve the question of Freud’s character.

Was Freud a good man or a bad man? Countless biographies, papers and raging controversies have accrued to every aspect of his life. There are those who delight in poking holes in his theories, and impugning his moral, domestic or professional life, as well as those who determinedly defend the man. As though Freud’s conduct would validate or nullify his theories, his behavior account for his ideas.

Among the most vexing questions pertaining to Freud’s character is that of his conduct with regard to the safety of his sisters during the period following the Anschluss, when, at the desperate urging of many friends and the tireless efforts of his protégé, Princess Marie Bonaparte, the dying Freud at last consented to be removed from his beloved and hated Vienna to the safety and sanity of London.

Freud was allowed to take six people with him (and his dog), but did not attempt to procure exit visas for any of his four sisters (a fifth was already living in America). They perished in Hitler’s death camps.

There is evidence that Freud’s decision was based on his understandable inability to comprehend the depth of Hitler’s insanity. Freud knew (and perhaps to some extent reveled) in Hitler’s hatred of him, but how could he know, understand or believe that Hitler was determined to annihilate all Jews? (The rest of the world didn’t get it, either.) His sisters were all older than he (he was 82), and he couldn’t imagine them being able to start over in a strange land. As a dying man in great physical distress, he was arguably incapable of fully rational thought.

Yes, there are many arguments to support the notion that there are excuses and explanations for Freud’s failure to save his sisters.

But, like with everything else regarding Freud, questions persist. And out of this particular question, Macedonian novelist Goce Smilevski has fashioned a wrenching and disturbing novel, centered on and narrated by Freud’s spinster sister, with the unfortunately ironic name Adolfina. Her long and unhappy life (and death) is the stuff of this heart-breaking book, a recent winner of the European Union Prize for Literature.

Ascribing guilt or innocence to Freud in relation to his sisters is not what especially concerns Smilevski. Using Adolfina as his conduit, he creates a wide-ranging meditation on sanity and madness; on theories of wisdom, theology, parenthood, and science; on Freud’s ideas and nature, and his feelings about his Jewishness — in short, about a lot of things — but to characterize this novel as ambitious would be to imply its author had premeditated intellectual goals. Smilevski’s book feels more organic than that, as though its many ideas and feelings had been rolling around inside his head for a long time before finding graceful and painful expression here.

After being impregnated and then abandoned by her one love, Adolfina spends a good deal of her life in a “madhouse” called the Nest, where she is periodically visited by her brother. In the Nest she associates with Klara Klimt, the sister (another sister!) of the famous artist. The place is run by a grandson of Goethe, who argues with Freud that the achievements of Darwin and Copernicus (and Freud himself) pale next to Thomas Crapper’s invention of the flush toilet as a benefit to the human race. Klimt and Dr. Goethe are no mere cameos or celebrity walk-ons, but fully fleshed-out people, as is Freud himself, who at one point dresses in a fool’s cap and bells and gets drunk on schnapps.

“Freud’s Sister” is a novel that requires slow and careful reading. There are so many ideas being explored that reading too fast may scramble and render them difficult to absorb. This is a book you want to set down and think about every few pages.

I do not read Macedonian, but the highest compliment I can pay the translator, Christina E. Kramer, is that the novel feels as though it had been written in English. Apparently Smilevski, who does speak English, concurs, as he has praised the translation. Like Tolstoy, Smilevski chooses to use simple words, but to connect them eloquently so that they build to create powerful and complex images, ideas and feelings.

“Freud’s Sister” is that rare artistic achievement that is more than the sum of its parts — informative but also wise, insightful and deeply moving.

Nicholas Meyer is the author of the novel “The Seven Percent Solution” as well as its Academy Award–nominated screenplay. He was the screenwriter for the Philip Roth adaptations “The Human Stain” and “Elegy,” and he wrote and directed three “Star Trek” films including “Star Trek II: The Wrath of Khan.” He is currently writing the screen adaptation of Robert Caro’s “The Power Broker.”