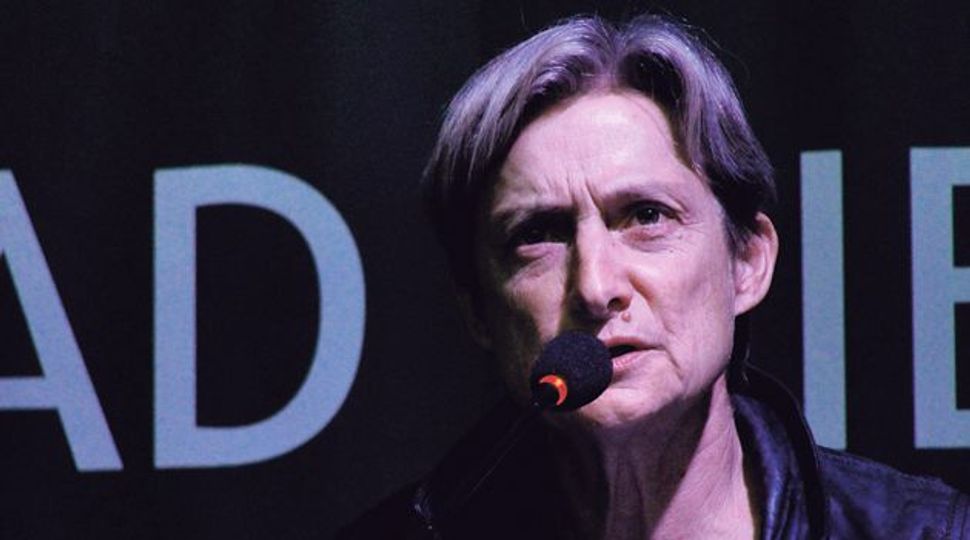 The Butler Did It: Academic superstar Judith Butler has aligned herself with some of the most outspoken critics of Israel. Image by Wikimedia Commons

Judith Butler is not anti-Semitic. I agree with her on that point, which she makes on her publisher’s website. Her new book, “Parting Ways,” represents her attempt to set the record straight regarding her controversial views on Zionism.

As a professor in the departments of rhetoric and comparative literature and as the co-director of the program of critical theory at the University of California, Berkeley, Butler is considered a superstar academic with a big following among gender and sexuality activists along with supporters who promote boycott, divestment and sanctions (BDS) against Israel. Recently, she was awarded the revered Theodor Adorno Prize in Frankfurt, Germany, igniting a global debate about her worthiness to receive this award, which is given triannually by the City of Frankfurt for excellence in philosophy, music, film and theater. The award is named for the prominent German Jewish sociologist, philosopher and musicologist who most famously fashioned the phrase “To write poetry after Auschwitz is barbaric.”

In her book, Butler attempts to parse distinctions not only between Judaism and Zionism, but between different forms of Zionism, while laying out the case for what she alternately calls a one-state solution and a binational solution. She yearns to prove the existence of a “different Jewishness than the one in whose name the Israeli state claims to speak.” Yet, her chosen subjects are so varied that they really don’t create a coherent argument. They range from Edward Said to the lyrical poet and activist Mahmoud Darwish to Hannah Arendt, Emanuel Levinas, Martin Buber, Walter Benjamin and Primo Levi.

As a cross-disciplinarian, it is her impulse to include this variety of intellectuals in her book, but it is too much of a stretch to link intellectual arguments to make her points among such a diverse group. But in her reading of these philosophers, literary critics and poets, there is nothing new and there is a lot of confusion in her assertions.

Since Zionism was founded as a political ideology in the 1800s, there have been Jews who have opposed it, most notably the Bundists, who prided themselves on their secular socialist universalism. However, the Holocaust knocked much of their philosophy on its side.

Reading Butler can be unnecessarily frustrating, though her clumsy literary style seems to be intentional and even political. Here is an example of her writing: “Similarly, as I live in a world with others who do not share that formation, I find myself disoriented within my orientation, expelled from its frame, and this is the disorienting trajectory of moves both ethical and counterhegemonic.” In fact, after winning first prize in the “Philosophy and Literature Bad Writing Contest” two decades ago, Butler argued that her intentionally obscure style was actually a political statement. Defending herself in a New York Times op-ed, she called her writing “difficult and demanding.”

But the writing in these essays is simply cumbersome and frustrating. For example, she makes arguments about Jewish identity by employing obscure words such as “nonidentitarian.” If her aim were indeed to influence political discourse, a more accessible writing style would be beneficial.

Butler’s stated goal is to argue for a one-state solution for Israel-Palestine. She believes that a binationalist state could replace the current status quo. But Butler consistently defines Israel as a “settler” or “colonizer state” and the Palestinians as the “indigenous” population — so how does she expect to build a cohesive, rational binational state that would be respectful of two claims to one land?

She doesn’t simply reject Zionism; she gets the facts wrong. She states: “Zionism is one way that religion has entered public life,” but Zionism is not religion. Though, of course it is Butler’s personal prerogative to be anti-Zionist, she should at least get her facts right. Indeed, both left-wing and right-wing antecedents of Zionism were profoundly secular, from Benjamin Netanyahu’s historic mentor Ze’ev Jabotinsky, who founded the notion of a greater Israel that informs today’s right-wing Israeli government, to leftists like Martin Buber, Ber Borochov and others, many of whom were Marxists inspired by the revolutionary era of the late 19th and early 20th centuries.

As Martin Buber wrote to the Indian leader Mahatma Gandhi in 1939: “We need our own soil in order to fulfill it. We need the freedom of ordering our own life.” This is the best distillation of political Zionism there is, crossing both left- and right-wing politics and made by someone whom Butler admires as an early proponent of a binational state for Jews and Palestinians, that was rejected — alas — by both Jews and Palestinians.

Perhaps left-wing Zionism has been completely eclipsed by right-wing Zionism, profoundly reshaping the debate for the future, but that is not the argument that Butler makes.

Since she refuses to travel to Israel, she has no opportunity to engage on the ground with Israelis or to experience the dynamics in society there today. Indeed, in her acknowledgements she thanks colleagues with whom she spent time at Bir Zeit, the excellent Palestinian university near Ramallah, but can offer no such acknowledgement to colleagues in any Israeli universities.

Finally, she tips the hand of the BDS movement and shows why she is such a hero for this cause as she lays out arguments for why these global protests address “the claims” of Palestinians in 1948 as well as those under occupation today. Neither she nor they want simply to end the occupation; she wants to end the state of Israel and replace it with a one-state solution that seems impossible to imagine in any pragmatic political scenario.

She writes unconvincingly that “the loss of demographic advantage for the Jewish population in Israel would surely improve prospects for democracy in that region.” The Arab revolutions, as important as they have been in deposing corrupt dictatorial regimes, don’t bode well at the moment for democracy, particularly with regard to women’s rights. Nor does fundamentalist Judaism, which is increasing in Israel today. The irony is that the best chance, still, for a humanistic vision for both Israelis and Palestinians is two states based on the division of the land.

With many on the Israeli and Palestinian sides feeling despondent and fearing that hope may be lost for a viable two-state solution, there is increasing debate about aiming for a one-state solution. I heard this often this summer when I was in Israel, Ramallah and elsewhere throughout the West Bank, in private and public conversations among colleagues, friends, politicians, leading academics and others, but no one who discussed it did so without a lament in their voice. It is a worst-case scenario of an already bad situation, with fanatics on both sides likely to win out over the type of humanistic intellectuals that Butler profiles in these essays.

Jo-Ann Mort, who writes frequently for the Forward about Israeli and Palestinian issues, is also CEO of ChangeCommunications, a strategy firm with clients in Israel and the Palestinian Authority areas.