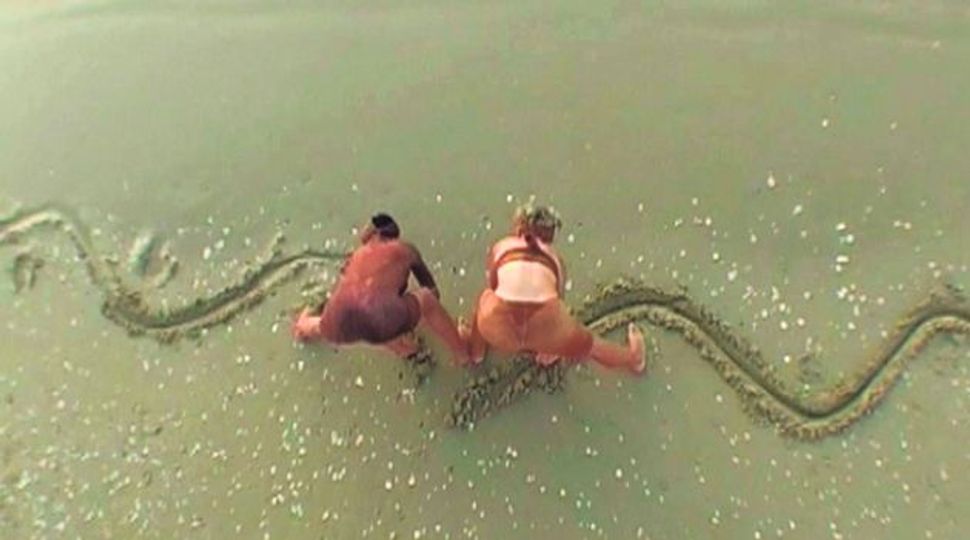 Although the Middle East seems to be forever in the news, for many of us, its reality remains distant. And the media cycle, with its focus on violence and turmoil, can make the region feel even more foreign. So it’s welcome when anyone finds a way to bring the Middle East closer to home. This is what Judith Brodsky and Ferris Olin, co-directors of the Institute for Women and Art at Rutgers, have done with “The Fertile Crescent,” a sprawling exhibition of art produced by women of the Middle East and its diaspora.

“The Fertile Crescent” is actually comprised of 14 art exhibitions, as well as 17 lectures, symposia and panels; and 14 performances and film screenings — all spread out across the campuses of Rutgers and Princeton universities; in short, an incredibly impressive and fairly mind-numbing amount of culture. I recently visited two of the core exhibitions (an admittedly meager part of the whole) at the Princeton University Art Museum and the Bernstein Gallery at Princeton’s Woodrow Wilson School. Both shows contain work by female artists of a variety of nationalities — Iranian, Israeli, Palestinian, Egyptian and more. Some of the artists (for example, Shirin Neshat) are well known in the U.S., but many aren’t, and just discovering the lesser known artists made the trip worthwhile. 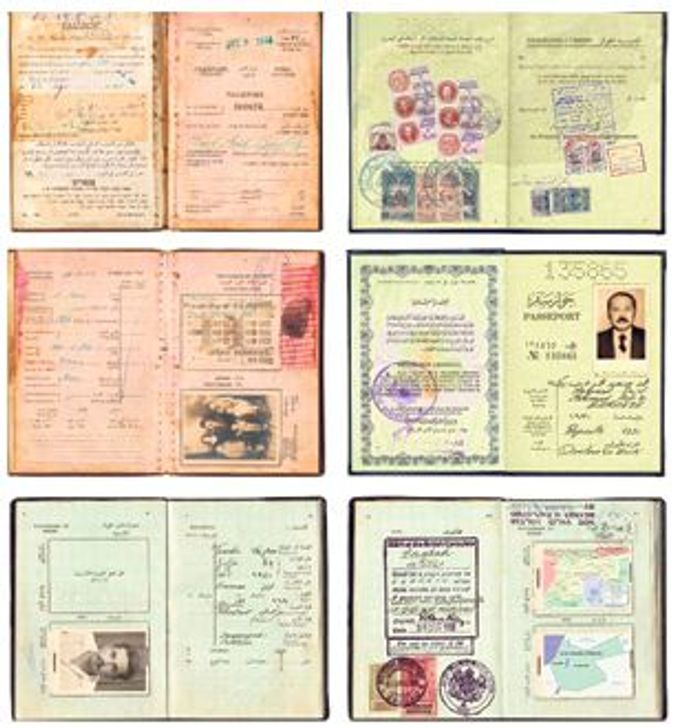 Passports To Nowhere: Zeina Barakeh?s art shows how her family has been routinely categorized. Image by Zeina Barakeh

At the Princeton University Art Museum, the sounds of Israeli artist Sigalit Landau’s video, “Dancing for Maya” (2005), filled the front gallery. In the three-channel video, Landau and a doppelganger dig sine curves into the sand with their hands, starting at opposite ends of the beach, moving toward each other and then crossing paths. As the waves lap at the shore, they encroach on what eventually becomes a double helix and almost immediately erode parts of it. But the women continue to work relentlessly, and their efforts, combined with the roaring calm of the ocean, create a kind of extended zen moment.

Opposite Landau’s video are two paintings by Palestinian artist Laila Shawa. Shawa’s diptych, “Day and Night, Night and Day,” comprises two canvases of brightly colored geometric abstraction — except the patterns are slightly off, the lines bent, the grids woozily imperfect. It’s a clever means of subverting a longstanding artistic expression (with precedents from Islamic art to the modern Western canon). Moving from the peace of Landau’s video to Shawa’s vertiginous feeling of a reality distorted at the core seems an apt metaphor for life in the continuous war zone that sometimes seems to characterize life for both Israelis and Palestinians.

A short walk across campus, at the Bernstein Gallery (really just a basement student lounge at the Woodrow Wilson School), another Palestinian artist, Zeina Barakeh, also humanizes the reality of the conflict. Barakeh’s fantastic installation, “The Third-Half Passport Collection: M.E. Transit” (2012), consists of archival inkjet prints of the passports of her family members, tracing the ways they have been categorized and classified since 1943. The colorful stamps and photographs make for surprisingly aesthetic tableaux, while the official language of the documents is stark and powerful: The status on one first-generation Palestinian passport reads, “Lost in 1948.” Another, under “Special Pecularities,” lists the bearer as “Dispossessed, stateless.”

Not all of the artists in the two shows are equally successful, though; some overstep the fine line between imbuing their art with politics and letting politics overrun their art. It is, in part, a question of subtlety, which isn’t to say that good art can’t have a point of view. But the louder and more explicit the statement, the less room there is for the viewer to interact creatively with the piece.

Works by Iranian artist Parastou Forouhar demonstrate both sides of this distinction. At the Bernstein Gallery, Forouhar’s “Freitag,” a four-panel photograph, plays with the symbol of the chador, turning the religious garment into a sweeping and beautifully patterned wall curtain, with two fingers of a hand reaching through in the center to grasp it. The work raises questions about the way we approach the chador — can it be beautiful, or is it simply demeaning? — and the woman wearing it — is she relegated to the background, like decoration, or does she possess some power?

And yet, at the art museum, Forouhar’s work mostly disappoints. A whole wall is given over to her pieces, three of which are digital prints that use smaller images of bound or bleeding bodies to create larger wholes: a butterfly, in one case; weapons, in another. These bodies-as-symbols prints are overwrought and obvious, like some grotesque version of Magic Eye for the politically minded.

Looking around the museum gallery, I began to wonder about the layout of the show. Here, Forouhar had an entire wall, while two prints by Neshat were positioned far apart, both of them alone and seeming to anchor walls where there was simply nothing else to hang. Since the show wasn’t quite arranged by artist, nor was it pulled together by an overarching theme, it was hard to make connections between the disparate artworks.

The Bernstein Gallery display suffered from the same problem: some strong art, some weak, and not much to hold everything together. What’s more, the placement of electronic works by Zeina Barakeh — two animations with a low-volume soundtrack and an aural piece heard exclusively through headphones — was incredibly frustrating, as students working loudly together on stats problems interrupted the emotional narrative.

Ultimately, the only conceptual framework I could discern for either show was the basic fact of the artists’ Middle Eastern-ness, a conjecture essentially confirmed for me by the curators, who say that the breakdown was determined by physical and pragmatic concerns and a desire for diversity in each space. This is not only disappointing but also does a disservice to the art itself, which deserves a more challenging context.

“Our goal is to create an environment in which women are not essentialized, and in which diversity and individuality of cultures are not subsumed under a single umbrella,” Brodsky and Olin write. But by grouping artists together only under the vague rubric of Gender, Art, and Society in the Middle East, which is the exhibit’s subtitle, they have done just that — reinforced the essentialist take.

“The Fertile Crescent” is an enormously impressive undertaking, and Brodsky and Olin should be commended for bringing contemporary art with Middle Eastern roots to the Northeast. But simply bringing art isn’t enough; they must do a better job of engaging with it.

Jillian Steinhauer is assistant editor of the art blogazine, Hyperallergic, and a freelance writer living in Brooklyn.