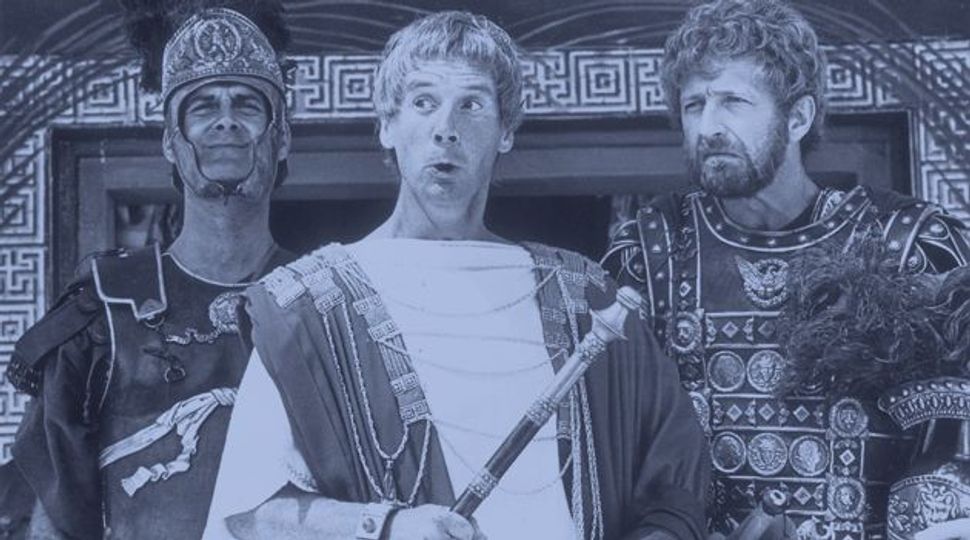 Biggus Yiddishist: In the Yiddish New Testament, Pontius Pilate (played by Michael Palin in the film ?Life of Brian?) offers to free a criminal on ?yontif.? Image by Getty Images

In my September 6 column about a Yiddish translation of the Qur’an, I observed that many of the singular effects created by translating the sacred scriptures of Islam, a religion closely linked to Judaism, into an intensely Jewish language like Yiddish would no doubt be found in a Yiddish translation of the Christian New Testament, too. Two of you have written to confirm this with some interesting and even amusing examples.

Stephen Berr relates once reading aloud to his Yiddish-speaking immigrant father the story from the Gospels of how Pontius Pilate, the Roman governor of Palestine, sentences Jesus to death. “It was very strange for my father,” Mr. Berr writes, “to hear how Pilate’s wife pleads with her husband not to harm the ‘dozikem tsaddik.’ And when Pilate offers to free a convicted criminal ‘af dem yuntif,’ because it’s a ‘minhag,’ and suggests it be Jesus ‘vemn men ruft moshiakh,’ and the crowd shouts, ‘Zol er gekreitsigkt vern,’ and my father asked ‘Ver hot gezogt dos?’ and I replied, ‘Di yidn hobn gezogt dos,’ he blurted out: ‘Dos iz gor un gantsn meshuge!’”

To set the scene for this episode, one must remember that it’s the first day of Passover, Jesus having been arrested after the Seder the night before. In the King James Bible, we are told that Pilate’s wife asked him not to harm that “just man”; that the Roman governor “was wont to release a prisoner on the feast” and asked the crowd if this should be “Jesus, which is called Christ”; and that the crowd said, “Let him be crucified!”

Mr. Berr’s befuddled father, who asked in Yiddish, “Who said that?” and was told by his son, “The Jews said it,” thought the story gor un gantsn meshuge, “totally nuts.” Why on earth would a crowd of Jews on a yontif, a Jewish holiday like Pesach when there was a minhag, a Jewish custom, of freeing a prisoner, clamor for the crucifixion of a tsadik — a term indeed meaning “a just man” but often referring in Yiddish to a Hasidic rabbi — just because somebody called him the Messiah, the moshiakh? (In Yiddish, moshiakh has a familiar, everyday feel that is the exact opposite of the coldly regal “Christ.” You would never say in English to a friend who helped you out in a pinch, “You’re my Christ,” in the sense of “You’re my savior,” but you certainly might say “Du bist mayn moshiakh” in Yiddish.)

The Yiddish New Testament that Mr. Berr read from, if it is the same as the one referred to in an e-mail from Peter Heinegg, a professor of comparative literature at Union College in Schenectady, was Henry Einspruch’s Bris Khadoshe. (The Hebrew term b’rit hadasha — literally “a new covenant” — comes from a verse in Jeremiah.) Einspruch, according to Mr. Heinegg, was a Polish Jew, born in 1893, who was drawn to Christianity in his teens and eventually became a Protestant minister in America yet never gave up his sense of Jewish identity. His Yiddish translation of the New Testament was published in Baltimore in 1941 and was subsequently reprinted several times.

Adapted from the King James Version, Einspruch’s translation, Mr. Heinegg writes, is a good one that often uses Yiddish to advantage in order to give New Testament passages a stronger Jewish flavor than they have in the original. Thus, for instance, when Jesus, at the Last Supper, “took bread and blessed it” in the King James Version, in the Yiddish he takes matse; when his disciples, after his death, “communed together and reasoned” about his disappearance from his tomb, Einspruch uses the Hebrew-derived Yiddish idiom Zi zenen geven mefalpel, “They argued Talmudically.” When the seven angels in the Book of Revelations blow “seven trumpets” on Judgment Day, Eichhorn’s angels blow zibn shoyfres, “seven shofars.”

On the other hand, as Mr. Heinegg observes, “the downside to this more intensely Jewish atmosphere is that it makes the militantly anti-Judaic passages in the New Testament all the more harsh or offensive to Jewish ears.” One example given by him is Paul’s statement in the Epistle to the Galatians that “Christ redeemed us from the curse of the Law.” In Yiddish, Mr. Heinegg writes, der klole fun der toyre, “the curse of Torah,” sounds far worse. Even for a Jew attracted to Christianity, this is hard to bear.

My favorite example of Mr. Heinegg’s examples, though, has nothing to do with Jewish religious terminology. It occurs at the end of the same “Talmudic argument” after Jesus’s death when he appears to his disciples and asks — seeking to prove that he is flesh and blood and not an apparition — whether they have anything for him to eat. (In the King James, this goes: “Have ye here any meat?”) In Einspruch’s Yiddish, the question is: “Hot ir do epes tsu esn?”

The untranslatable epes is marvelous. Epes is one of the homiest words in the Yiddish language. It means “something” or “anything,” but it can also mean “a bit of,” and it makes Jesus sound as if he were saying, “Hey, you guys, can you spare me a bite to eat?” How could anyone have thought he was an apparition after that?

Questions for Philologos can be sent to Phiologos@forward.com