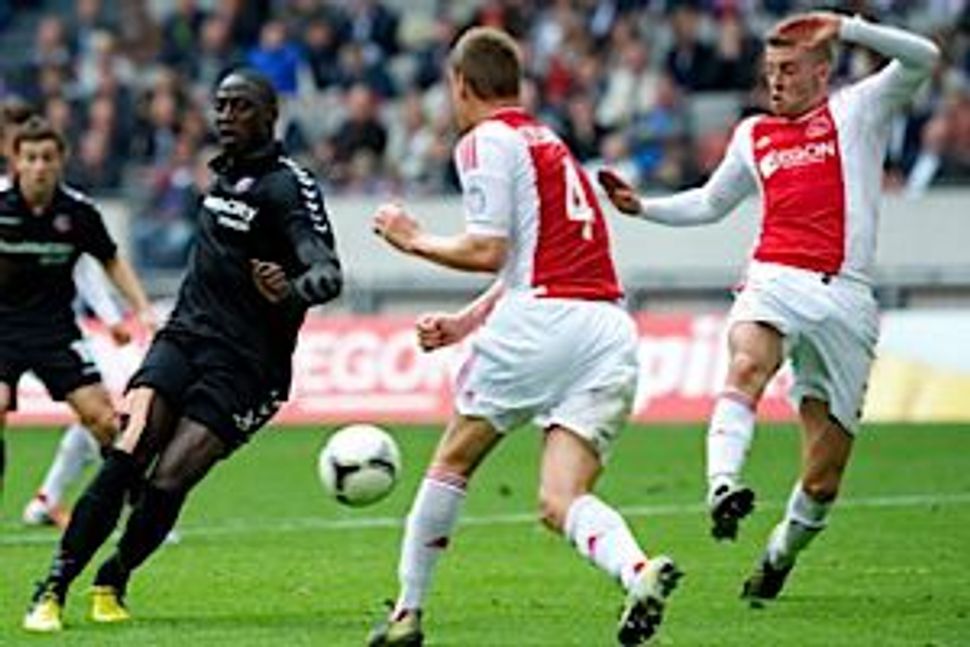 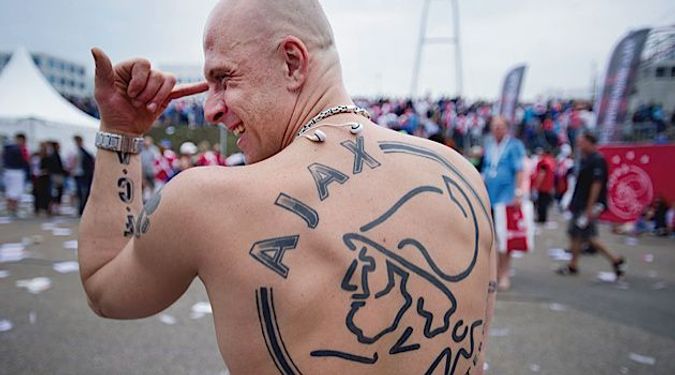 Stronger Than Dirt: Fans of the Dutch team Ajax refer to themselves as Jews and wave Stars of David at soccer matches. Image by Getty Images

Ajax, the Dutch, the War: The Strange Tale of Soccer During Europe’s Darkest Hour
By Simon Kuper
Nation Books, 257 pages, $15.99

Bill Shankly, the legendary soccer coach of the British club Liverpool FC, is often quoted as saying, “Football is not a matter of life and death, it’s more important than that.” The attribution is erroneous, but in the face of the Holocaust, even the playfulness of the sentiment rings hollow. Soccer’s fanatical support and cultural centrality, however, can provide a crucial prism through which to view life and death, war and peace.

Simon Kuper, author of “Soccer Against the Enemy: How the World’s Most Popular Sport Starts and Fuels Revolutions and Keeps Dictators in Power,” is the world expert on the intersection of soccer, culture and politics. His newly rereleased book, “Ajax, the Dutch, the War,” is a revaluation of the Dutch role in the Holocaust, starting with the surprising silence of the country’s biggest soccer club, Ajax, regarding its actions during the Nazi occupation.

The Holocaust is a subject that appeals to writers for the same reasons that World War II films appeal to movie directors: The bad guys are really bad, and the good guys don’t have to justify themselves. In this book, though, Kuper, who grew up Jewish in the Netherlands, goes the other way. He makes us reconsider our characterization of the Dutch people as innocent bystanders and helpers of Anne Frank. Using the tight-knit clubbiness of soccer clubs, and especially that of Ajax — popularly, though with tenuous cause, known as the “Jewish” club — he investigates how “goed” (“good”) the Dutch people actually were.

Standing in opposition to the general perception of Dutch tolerance and progressiveness (friendly tourists, marijuana at “coffee shops” and Amsterdam’s famous Red Light District) is a brutal fact. As Kuper starkly puts it, “About three-quarters of [Holland’s Jews] were murdered in the gas chambers; in all of Europe only Poland lost a larger proportion of Jews.” Even Anne Frank was probably killed as a result of a Dutch informer. How does Amsterdamsche Football Club Ajax — and, by extension perhaps, the entire Dutch nation — square the evidence of their being “fout” (“wrong”) with their own self-perception? And if, as Raul Hilberg’s “The Destruction of the European Jews” shows, 120,000 of the Dutch Jewish population of 140,000 were lost in the war years, why do Israel and the English-speaking world still love the Dutch?

Ajax is asked this question by Kuper not only because it is the largest and most successful of the Dutch teams, but also because its fans refer to themselves as “Jews” and shake Stars of David at matches. Supporters of opposition teams, most notably Feyenoord from Rotterdam, perform anti-Ajax songs, often with an anti-Semitic bent: Most chillingly, Feyenoord fans hiss to mimic the gas coming into the death chambers. But Ajax, situated near the now largely de-Judaized Jewish quarter, remains officially silent about its current and historical Jewish connections and its actions during the occupation. 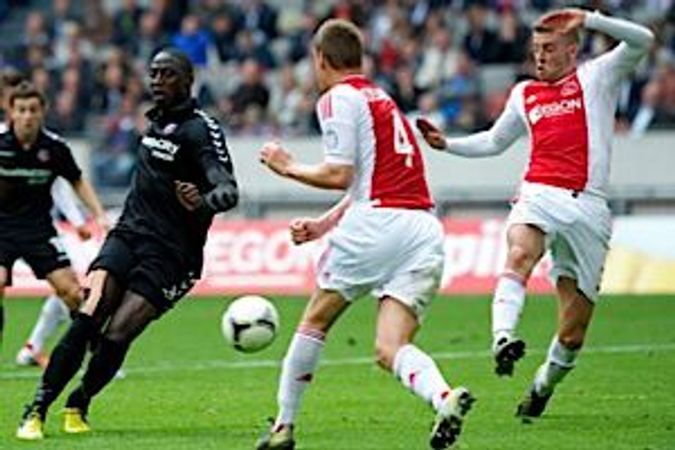 What Kuper finds in his investigation is a mixture of shame and officially encouraged ignorance of both the club’s Jewishness and its acquiescence to the Nazification of Dutch society during the occupation. Although Kuper doesn’t limit his scope to Ajax or even the Netherlands, it is that country’s particular form of social arrangement that fascinates him. Seemingly, belonging to a club — often a soccer club — was a primary form of affiliation. Though it could reflect other loyalties (religion, class, location), club membership could also supersede them. This made the German edicts precluding Jewish membership so invidious, and the clubs’ reaction to those rules the most telling.

As the war in Europe raged on, soccer continued. On June 22, 1941, the day Germany invaded the Soviet Union, a self-evidently crucial moment in the war, 90,000 people watched the German league final in Berlin. Kuper asks with exasperation, “What were they thinking of?” In a fascinating trawl through as many official minutes of wartime club meetings as he could find (Ajax did not give him access), Kuper is able to show how the laws of the occupation were refracted through club bylaws.

Sparta Rotterdam does not seem to have thrown away a scrap of paper, and Kuper shows us how “collaborators, Jews, and everyday folk muddling along — add up to a microcosm of the Dutch war.” Kuper travels to the backwater of Gorcum, where he discovers that the club Unitas ended up resisting the Nazis because they were in contravention of club bylaws. And he shows how the numerous Jewish players, supporters and officials, as well as their Jewish survivor physiotherapist, Salo Muller, are all sidelined from the official history because it’s easier to pretend that the Jewish involvement with Ajax is a myth and that the club’s actions in the war were goed than to tell the complex story of a conflict.

Overseas the power of a simple narrative is apparent. The Jewish involvement in Ajax is known in Israel: The sister of Ajax’s greatest player, Johann Cruijff, married a Jewish man, and Cruijff visited Israel with great fanfare and mutual love.

The 1974 World Cup final — where the Germans beat the fluid and popular Dutch team — cemented the Dutch as the “anti-Germans” for a generation in the global soccer community. For foreigners not party to Dutch scholarship of their wartime guilt and largely unaware of the Dutch language racism of recent years, it’s easy to think of the Dutch as the non-Germans and, given a visible royal family, conflate them with the Danes. It’s easy, it doesn’t seem to matter, but it’s wrong.

Kuper’s stock has never been higher. In addition to his appearance as “Simon” in his wife’s best-selling book [“Bringing Up Bébé,”][3] the widely reported links of the Egyptian Revolution to groups of soccer supporters make his earlier book seem prescient. Moreover, in the time between the initial American release of “Ajax” and now, Kuper co-wrote (with sports economist Stefan Szymanski) soccer’s version of “Moneyball.” And, for reasons that he outlines in “Soccernomics,” soccer, especially European soccer, is increasingly important to American viewers.

Kuper’s afterword begins to explain how Dutch society has begun to fracture in the 21st century. Instead of identifying with Anne Frank’s helpers, or as victims of a Nazi occupation, the Dutch have left the postwar mindset behind entirely. Kuper quotes Ian Buruma in his book about Pim Fortuyn’s funeral, “Murder in Amsterdam”: “Rotterdammers pride themselves on being hard workers, the salt of the earth, tough guys. Amsterdam, to them, has a namby-pamby image of city slickers, snobs and cosmopolitan weirdos.” Kuper comments, “Maybe Feyenoord fans have come to sum up these slickers, snobs and weirdos with the word ‘Jews.’”

With the advent of right-wing populist politicians like Fortuyn and Geert Wilders, casual racism, anti-immigrant sentiment and rhetorical anti-Semitism have become pervasive in Dutch culture — and, increasingly, throughout Europe. As the memories of the Holocaust fade, an understanding of the horrors of European racism becomes the province of history buffs. Instead of standing up against bigotry, the Ajax chairman suggests that the fans stop calling themselves “Jews.”

But as Kuper wrote in a column for the Financial Times in which he discussed his wife’s book, “Writing a book about one’s adopted country is the solution to the integration issue.”

“Ajax” may take as its starting point soccer and Dutch society, but it’s the story of an outsider trying to understand the people among whom he’s living — and looking for insight to the hardest part of recent history. It’s a story about the convenient narratives that citizens tell about their home, and that groups tell about themselves and other groups. It is, in short, about the ignorance, lies and half-truths that get mixed up with facts in the process of affiliation, and baked in the ovens of nationalism and soccer rivalries. And the ovens of Europe are as worrying now as at any time in the past 70 years.