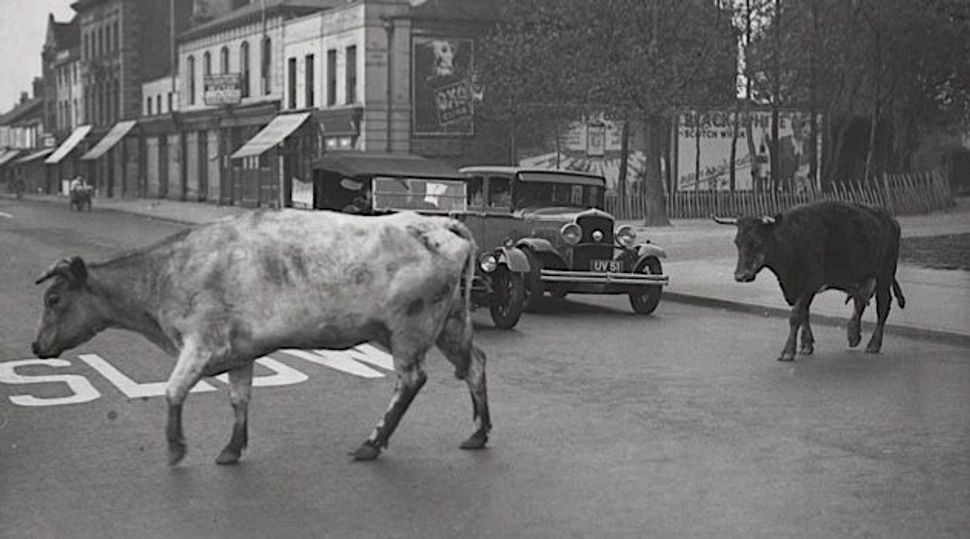 Having a Cow: Many forget that the phrase ?the time of the skinny cows? comes from the Bible. Image by Getty Images

Writing about the Spanish economic situation in the New York Times on October 4, columnist Roger Cohen, in an op-ed entitled “In the Time of the Skinny Cows,” remarked:

“In Spain, the euro zone’s fourth-largest economy, the good times are those of ‘vacas gordas,’ or fat cows, and the lean years those of ‘vacas flacas,’ or thin cows. Hispanic cattle, no longer fed on funny money, are super-skinny in this season of bust and brooding.”

The striking thing about this is that Cohen, who is not exactly a high school drop-out, appears to have had no clue that the image of fat and thin cows to signify good and bad times is, far from being uniquely Spanish, a biblical one. And not only does it come from the Bible, it comes from one of the best-known passages in the Bible, the one that relates Pharaoh’s dream of seven “well-favored cows” rising from the Nile and grazing in a meadow, only to be devoured by seven “ill-favored cows” that remain just as bony after swallowing them. Unable to find an interpreter, Pharaoh turns in desperation to the imprisoned Joseph, who explains that the dream is a prophecy of seven bumper years, followed by seven years of famine, that are in store for Egypt.

One could hardly ask for a better illustration of how the Bible, once the one book that every reader of English was familiar with, has long ceased to be so. The process of its fading from the consciousness of most literate English readers has itself been a long one. Until the late 18th or early 19th century, when the majority of the inhabitants of English-speaking countries were still regular church goers, ignorance like Cohen’s would have been inconceivable. Even in the late 19th or early 20th century, it would have been unlikely. Here, in the early 21st century, it is common. Unless you are an Evangelical or a synagogue-attending Jew, a knowledge of the Bible can no more be assumed than can be a knowledge of the Bhagavad-Gita.

And yet the influence of the Hebrew Bible on the English language has been enormous — far more than it has been, say, on Spanish, even though English speakers don’t refer to “fat-cow” and “skinny-cow” years. (Since the Bible was always far more of a household book in Protestant countries than in Catholic ones, where the laity was never encouraged to read it, its effect on Protestant speech has been greater.) Dozens of everyday English expressions — “a drop in the bucket” (Isaiah 40:15), “a man after my heart” (Samuel I, 13:14), “the fat of the land” (Genesis 45:18), “to put words in someone’s mouth” (Samuel II, 14:3), “to see eye to eye” (Numbers 14:14), and on and on — have biblical origins.

Yet there are also some English expressions that have been attributed to the Bible mistakenly. Indeed, one verse, Jeremiah 31:29-30, supplies us with two of these. It reads in the King James Bible: “In those days they shall say no more, ‘The fathers have eaten a sour grape and the children’s teeth are set on edge.’ But every one shall die for his own iniquity: every man that eateth the sour grape, his teeth shall be set on edge.” Appearances notwithstanding, neither “sour grapes” nor “to set one’s teeth on edge” is biblically derived. The first, the King James’ translators’ rendition of the Hebrew boser, “unripe fruit,” comes from Aesop’s famous fable of the fox and the vineyard; the second, their version of Hebrew tik’hena shinav, literally, “his teeth shall be blunted,” is an old Middle English idiom.

In freely rendering boser as “sour grape” and tik’hena shinav as “shall set one’s teeth on edge,” the King James’s translators were doing what all translators do when seeking to make an original text more accessible. Yet sometimes they were so stumped by the Hebrew that they translated it meaninglessly — and succeeded in coining a new English turn of phrase anyway. An example of this is Job 19:20, “My bone cleaveth to my skin and to my flesh, and I am escaped with the skin of my teeth.” We all know what getting away “by the skin of one’s teeth” means, but what is the skin of one’s teeth? The most probable explanation of the Hebrew words, b’or shinav, is that they refer to the gums — in which case Job is saying that he has survived with them alone, that is, without a tooth left in them. The King James, however, did not wish to gamble on this interpretation and stuck to a literal translation that made no sense but left — perhaps because of its very oddness — a lasting impression.

Back in the days when I went to college, one was still required to take a Great Books course in which a few parts of the Bible — which would have included Pharoah’s dream in the book of Genesis — were read. Today, I imagine, even that is passé. It’s a skinny-cow time for Scripture.