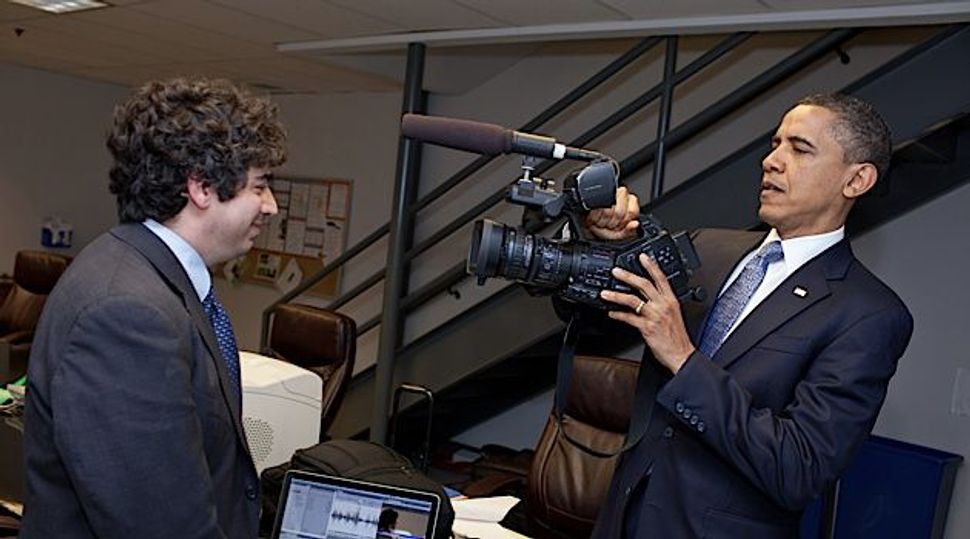 Ready For His Close-Up: Chaudhary poses for his former employer. Image by Courtesy Arun Chaudhary

Arun Chaudhary, the White House’s first videographer, is a free man now — more or less. The man who began working for Barack Obama back in 2007, documenting both Obama’s ascent and his presidency, is leaning back in his chair as he sits in a pub just across the street from New York City’s South Street Seaport. He’s drinking his second beer of the afternoon, and splitting a plate of fried calamari. Now a fellow at George Washington University and a senior vice president of communication for Revolution Messaging, he’s also on tour for his book “First Cameraman,” which documents his Obama years. Since Chaudhary, whose mother’s family is Jewish, no longer has to keep up with a grueling White House schedule, he has time to chat about civilian life, his years in D.C., and, perhaps most important, the legendary Seders he attended.

Adam Langer: So, what’s it like for you, not having to go to the White House anymore?

Arun Chaudhary: It sucks. You know, I’ll tell you the thing that I miss the most. I’m very good at getting my stuff done. But what I’m not good at is getting in vehicles or feeding myself on time. White House life was perfect that way. I could totally focus on work. There were tables with sandwiches on them. Having to take care of myself in that way has been a little worse.

You’re reminding me of that Woody Allen movie “To Rome With Love,” where Roberto Benigni becomes a celebrity and then just as quickly returns to obscurity.

That’s right — because I was a false celebrity. I was always standing next to someone very very famous. People would say, “I saw you on TV, Arun.” What they meant was that they saw my head dart by on CNN when I was trying to get out of the shot.

No, because you’re constantly seeing the president through other people’s eyes. That’s what allows you to never lose the reverence for the office. When you went into the White House, you could be grumpy, tired. When you’d leave, it would be dusk and you would watch people looking in, taking photos through the fence, wondering who you are, what you were doing. It was an amazingly special experience.

So let’s talk about Seders. You were a part of all five Seders that President Obama held, starting in Iowa.

Well, the Passover stories are pretty celebrated. But there’s another holiday story that hasn’t been written about that much. It’s a Rosh Hashanah story. The president had just returned from Hawaii. He had been on vacation, and some of us who hadn’t gone with him went to Reno [Nev.] a day early to meet him. It was September 2008. So David Katz (campaign photographer), Eric Lesser (assistant to David Axelrod) and I were all on the same plane, and we were like, “What’re we gonna do? It’s Rosh Hashanah; we gotta do something.” We did a lot of Google searches of Jewish delis. Usually, wherever you go, there’s gonna be one. In Lake Tahoe, there’s definitely one. On Hanukkah in Des Moines [Iowa] in 2007, I bought a menorah for the office at a Judaica shop. I thought Reno would be the same way. But there was only something called the Big Apple Deli in the middle of one of the most dilapidated casinos. So Eric, David and I went, and not a Jew had worked in that joint in the last 20 years. But they were super helpful. They got us apples, honey, everything we needed.

How did the Passover Seders transform over the years?

The biggest development was it became more like coming home for your family Seder: Every year, I did a big speech about the Hillel Sandwich, how it was an amazing technological breakthrough for Judaism — we can get all of our stuff done in one bite. One year, I was like: “Ahh, forget it. We’re running late. I’ll let it go.” The president was like, “No, you gotta do your speech.” It became like a family ritual.

What was your speech?

It was about how the Hillel Sandwich predates the Earl of Sandwich by a millennium. It’s not spoken of too much, but the Jews invented the sandwich and it wasn’t for fun — it was for religious significance. We were able to have our matzo with everything inside it. Hillel was a genius.

So, does the president really get into the Seders?

He does. He’s a big fan of the story as a story of redemption.

Does he get into singing “Dayenu”?

Yeah, he likes “Dayenu.” He likes the plagues too; everybody likes the plagues. He’s a very good speaker, and he likes the parts where he gets to use his Pharaoh voice. The first time he did it, I called him out on it. I said, “Come on, the rest of us aren’t trained orators; you can’t just roll over us using your Pharaoh voice.” There really is a marked difference at a Seder when six people are not Barack Obama and the seventh person is. You notice that someone’s a little better with his diction.

Is the Seder potluck?

No, people bring in their own recipes, but they’re done by the White House chefs. It’s the White House, so it’s hard to bring in food. We had macaroons get checked by Secret Service at the door, and so the president had to intervene.

How about you? Your mother’s Jewish, so did you grow up with Passover Seders?

Yes, but that was the extent of it — Seder, Rosh Hashanah, Hanukkah; we were very secular. My family on my mother’s side were probably Forward subscribers in the 1920s.

So, what’s your take on the concept that some people have proposed — that Obama’s our first Jewish president?

Well, I find the president’s view of Judaism very familiar and comforting; it’s not the play-acting that you get from a lot of politicians. He talked a lot about the Jewish books he’d read. He talked about Saul Bellow and Philip Roth, which helped his understanding of what it means to be Jewish. As for Roth, I’ve only been star-struck two times. Meeting actors? I couldn’t care less. Sports? Same thing. The only two people I was star-struck by were Gorbachev and Philip Roth. I was so star-struck I could not go up to Roth and say hello.

Were you at the White House when Bob Dylan was being honored?

No, but I don’t think I would have been star-struck. He’s just a musician. The only musician I was head-over-heels to meet was Wayne Kramer from the MC5.

So what’s next? Any narrative filmmaking in your future?

There’s gotta be. People are like, “Are you gonna make a big documentary now?” I’m like: “Why? Documentaries suck now.”

How do you mean?

And you’re a writer too.

Yeah, I’m from [New York University], so they teach us to be singer-songwriters. Before I started work for Obama, I was writing a script about a senator running for president.

How close to the truth did your script turn out to be?

It’s similar, actually. I find that a lot of political fiction is pretty accurate. You hear a lot of people say: “Don’t watch ‘The Ides of March.’ The real world is nothing like that.” It was a lot like that, as far as I can tell.

You wouldn’t ever run for political office, would you?

I would run for Brooklyn borough president. It seems to be a great gig. But that’s about it.

You live in Washington, D.C., now; you’re in the wrong town for that.

Yeah, but I can come back. I can take Marty Markowitz — easy.