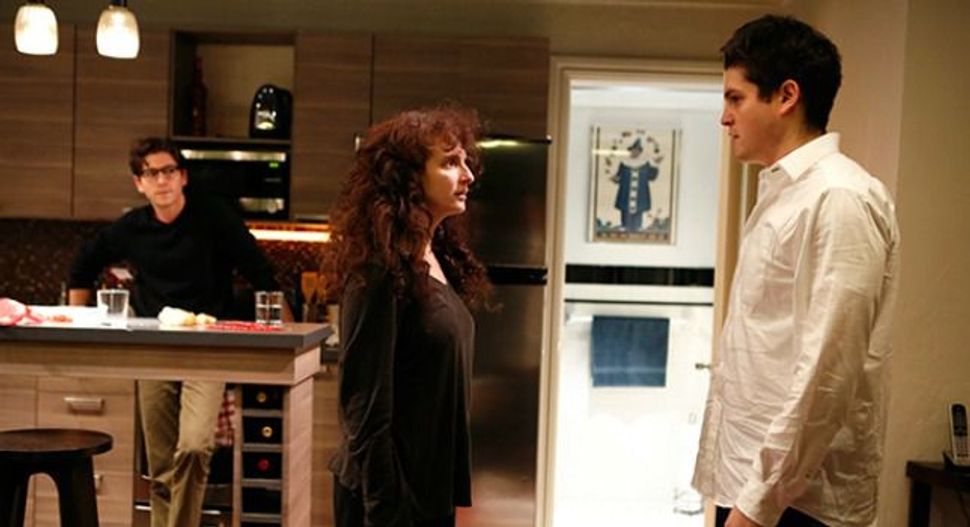 There is, so I’m told, a new off-Broadway play in New York that is called “Bad Jews.” Its plot revolves around, believe it or not, the struggle of three grandchildren for possession of their beloved and recently deceased grandfather’s “chai” (pronounced khy, with the guttural “ch” of “Bach”) — which is, as most or all of you know, a kind of charm necklace featuring the Hebrew letters h.et and yud in various designs. These two letters spell the word hai, which means “living” or “alive.” (It does not mean “life,” which is hayyim in Hebrew.) Considered by some to have a protective, amuletlike value, chais are worn by most people either because they simply like how they look or because they wish to proclaim their Jewish identity more subtly than by an assertive Jewish symbol like a Star of David.

Indeed, a chai is by no means a traditional Jewish amulet, and chai pendants probably did not come into existence until half-a-century or so ago, when costume jewelers first started producing them, which would make the grandfather in “Bad Jews” a member of the first generation to go around with one. Before that, there was no such thing as a chai at all.

When used other than in its ordinary sense, the word “chai” could mean only “18,” as in a Hebrew (or Yiddish or English) sentence like, “I donated chai dollars to my synagogue’s Passover matzo fund.” This is because the numerical value of the Hebrew letter het is eight and that of yod 10, and while the regular way of writing “18” is yud-het, het-yud adds up to the same thing and has the advantage of being associated with life.

In its sense of “18,” chai was traditionally used in Jewish life almost entirely in the context of making donations or giving gifts, often stated in terms of multiples, as in, “He gave three times chai [dollars] to Sam’s son for his bar-mitzvah.” In some Orthodox synagogues, where the custom exists of bidding for the privilege of performing various ritual tasks connected to the Torah scroll, this is frequently done with such multiples, too. I have in my possession a High Holy Day price list, put out by the Young Israel-Chabad Synagogue of Pinellas County, in Fla., with such suggested “opening bids” as: “Carrying of Chais did not come into existence until half a century ago. Torah through Shul [synagogue] — 5 x Chai”; “3rd Aliyah [being called up to make a blessing over the Torah] — 10 x Chai”; “Hagba [lifting the Torah scroll from the lectern before it is rolled shut] — 20 x Chai,” etc. Once the bidding gets heated, one assumes, the sky x chai is the limit.

But how far back in Jewish history does even this use of “chai” go? The farthest back I have been able to trace it (which doesn’t mean scholars can’t do better) is to the early generations of Hasidic rabbis in Eastern Europe, and specifically, to rabbi Menachem Nachum of Chernobyl (1730—1797), a disciple as a young man of the Baal Shem Tov, the Hasidic movement’s founder.

The story is told that once, arriving in a town to raise funds for needy Jews, Menachem Nachum encountered a miser and demanded that he contribute “chai rubles,” in return for which he, the renowned rabbi, would do him the honor of visiting his home. The miser agreed reluctantly, but when Menachem Nachum reached the front steps of the man’s grand house, he insisted on another “chai rubles” to climb them.

Gritting his teeth and pledging this sum, too, the miser was next told by the rabbi, now seated in his parlor, that a curse would be put on him if he did not proceed to donate everything he owned. With much weeping and wailing, he agreed — and turned into a great philanthropist, for Menachem Nachum, while assuming title to it, did not actually take his property away from him, and now that he no longer owned it, he felt no attachment to it and dispensed it freely to the poor.

There is also a story about Menachem Nachum’s younger contemporary, rabbi Aryeh Leib, “Grandfather of Shpole” (1724-1811), who asked a wealthy man to donate to charity “‘chai’ times ‘chai’ rubles” — that is, 324 rubles all told — as the price of curing his gravely ill daughter. Aryeh Leib was a disciple of rabbi Dov Ber, “the Maggid of Mezritch,” another disciple of the Baal Shem Tov, and it is perhaps relevant that the Baal Shem Tov himself was born on the 18th of the Hebrew month of Elul, 1698 — or, as the day is referred to in Hasidic literature, on ‘‘chai Elul.” It may have been as a result of this that the number 18, as expressed by “chai,” took on a special significance for Hasidism, which was reinforced by the word’s literal meaning.

Between the “Grandfather of Shpole” and the grandfather of “Bad Jews” are 200 years, more than enough time for chai as a potentially magical sum of money to also become chai as a potentially magical charm necklace — an article of dress, ironically, that no Hasidic Jew, and probably very few observant Jews of any kind, would agree to be caught dead wearing.

Here’s a video about the play “Bad Jews.”