When Foundations’ Days Are Numbered 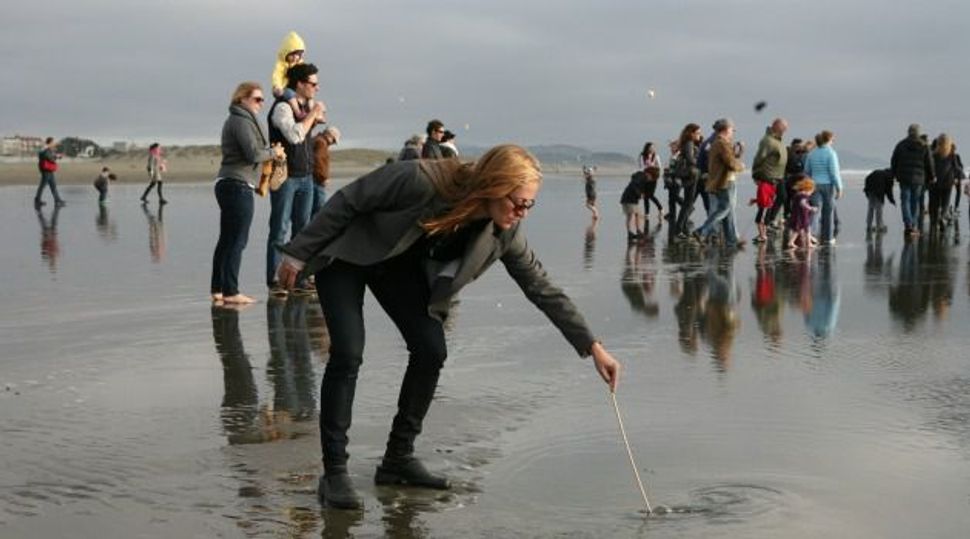 Low Tide: Reboot, which receives support from the Bronfman philanthropy, hosts events such as this tashlich for Rosh Hashanah at Open Beach, San Francisco. Image by Rebecca Goldfarb

The names of philanthropists like Charles and Andrea Bronfman may not be remembered by millions of beneficiaries 100 years from now. Unlike Rockefeller, Carnegie and Ford, whose reputations live on through generations of ongoing philanthropic largesse, the Andrea and Charles Bronfman Philanthropies (ACBP) is part of a trend of spend-down foundations.

Spending down means that, rather than preserving most of its assets, a foundation accelerates its annual spending to grant the entirety of its endowment by a predetermined date. According to research at Duke University’s Sanford School of Public Policy, 34 existing major foundations are projected to complete their spend-downs by 2020, representing nearly half of all spend-down foundations in the history of philanthropy. The Avi Chai Foundation, a major funder of Jewish education and literacy, is also in the process of sunsetting.

In the case of ACBP, the deadline is 2016, at which point the foundation’s entire endowment — reported as $18.4 million in its 2010 990 tax form, the most recent available data — will have been spent. Most of the funds will go towards ACPB-incubated projects such as Reboot, a leadership development program for young Jews, and Slingshot, a funder and publisher of a guide to innovative Jewish nonprofits. “In 2001, we chose our closing date because we thought 15 years sounded like a long time,” said Jeffrey Solomon, president of ACBP, “but it’s felt like 15 minutes.” According to research from Harvard’s Kennedy School, most foundations stick to the IRS-required minimum annual payout of 5% of their endowments’ value. However, ACBP and Avi Chai are part of a growing and highly strategic group of funders — including the Bill and Melinda Gates Foundation and Atlantic Philanthropies — that plan to spend their philanthropic dollars more aggressively and eventually close their doors.

Avi Chai has radically concentrated its funding over the past three years, reducing its number of grantees by nearly half, from 148 in 2008 to 75 in 2010. The initial spend-down deadline was 2027, based on the desire of its founding donor, Zalman Bernstein, to have the foundation’s money spent by people he knew, who shared his values. Following the financial crisis of 2008, the foundation’s endowment lost 20 percent of its value, and the trustees decided to accept an earlier deadline in order to maintain their spending level, now approximately $40 million per year.

The reasons cited by the directors of both Avi Chai and ACBP align closely with those listed by the National Center for Family Philanthropy as common motives for spending down, which frequently center on the founding donor’s desire to oversee the use of his or her philanthropic dollars. These include “a desire to control their own giving,” “fear of burdening future generations not interested in grant-making” and a “guarantee that their mission will be honored.” According to Yossi Prager, executive director of Avi Chai: “Spending down is an intensely personal decision. So much has to do with how the philanthropist wants to engage his or her own family.” Indeed, the Bronfmans decided to sunset based on conversations with their children; they recognized that their descendants would have different philanthropic interests and should be free to make their own decisions, apart from their parents’ preferences.

Although the immediate heirs may not share the values or priorities of the founding donors, a foundation’s decision to withdraw from the philanthropic scene tends to rest on the belief that other funders will replace them. “The argument that sunsetters make is that this generation of wealth creators ought to solve this generation’s problems and let the next generation solve the problems it faces,” said Joel Fleishman, a national expert on foundations and consultant to Avi Chai on its spend-down process.

This point is underscored by the fact that many foundations don’t adequately lay the groundwork for a next generation of excellence, opting to finance programs instead of organizations. Fleishman said that foundations might initiate a successful program and then pass the responsibility to other funders, whether governmental or philanthropic. Foundations “tend to want the biggest bang for their buck by giving program grants, without realizing those programs have to be administered competently by a nonprofit,” he added.

However, spending down may provide foundations with the opportunity to support a not-for-profit’s infrastructure rather than giving flashy, program-specific grants.

According to Fleishman, the most urgent priority for Avi Chai was shifting its focus “from the trees to the forest,” that is, making fewer grants to individual programs and more to ensure that the priorities of Jewish literacy and peoplehood would be attractive to future funders. As part of that aim organizations currently executing Avi Chai’s mission — primarily schools and camps — would be provided with the human capital and materials to successfully engage those potential donors.

Similarly, ACBP began its spend-down countdown with its grantees’ sustainability in mind. Any organizations that had received general annual support, such as Carnegie Hall, were informed in 2010 that they could expect only three more years of support based on the sunsetting timeline. According to Solomon, “The most common response we got was ‘Thank you for telling us so early.’”

For ACBP-incubated projects like Slingshot, the process was far more hands-on and gradual. ACBP originally housed and covered all costs for Slingshot. In 2009, the organization began its process of spinning off into an independent operation. Will Schneider was hired as executive director, using a grant from another philanthropy, the Richard and Rhoda Goldman Foundation — another spend-down foundation focused on Jewish life. Schneider’s mandate was to build the board and develop the program plan as well as fundraising materials and donor relationships that would ensure Slingshot’s sustainability independent of ACBP.

Schneider reported that, though initially it was a “slow changing of a narrative” to convince would-be donors to provide support, fundraising has gone very well for Slingshot, growing from two major funders to 18, as of this year. The best thing about the incubation and spin-off, for Schneider, was “the power to plan. I was able to organize my board and my case for support, and I had Jeff [Solomon] and Sharna [Goldseker, ACBP managing director] right down the hall to ask for advice.”

The future is a bit less certain for Avi Chai’s large family of grantees. Unlike many spend-down philanthropies that believe their aggressive spending can help resolve urgent issues, executive director Prager feels that “the needs in 2020 will be great in our field. We won’t have solved the problem by the time we go out of business.”

Asked whether he was confident that the spend-down and its investments in fundraising capacity would make Avi Chai’s grantees self-sustaining, Prager responded: “Some will [be] and some won’t. In Israel, we already wound our funding down over time… some of them have been wildly successful, and some have struggled. I can’t say I’m confident about all of them.”

Not-for-profits that previously benefited from generous support from a major foundation may be spurred to develop greater staff expertise and a broader funding base following a spend-down decision. The practices of Avi Chai and ACBP suggest that spend-downs can galvanize philanthropies to revamp their approach to focus more on crucial overhead, recruiting talented staff and developing a pool of potential funders. According to Fleishman, it may be reasonable to expect a time lag between the death of existing foundations and the emergence of obvious replacements, but “foundations can minimize the likelihood of a rude awakening for their grantees in everything they do, up to the point of the spend-down.”

Amy Schiller writes about politics, philanthropy, feminism and culture. Her work has appeared in The Nation, The Daily Beast, Salon, Alternet and other publications. You can read more at amybessschiller.com or follow her at @justaschill

When Foundations’ Days Are Numbered