Finding God in the Other 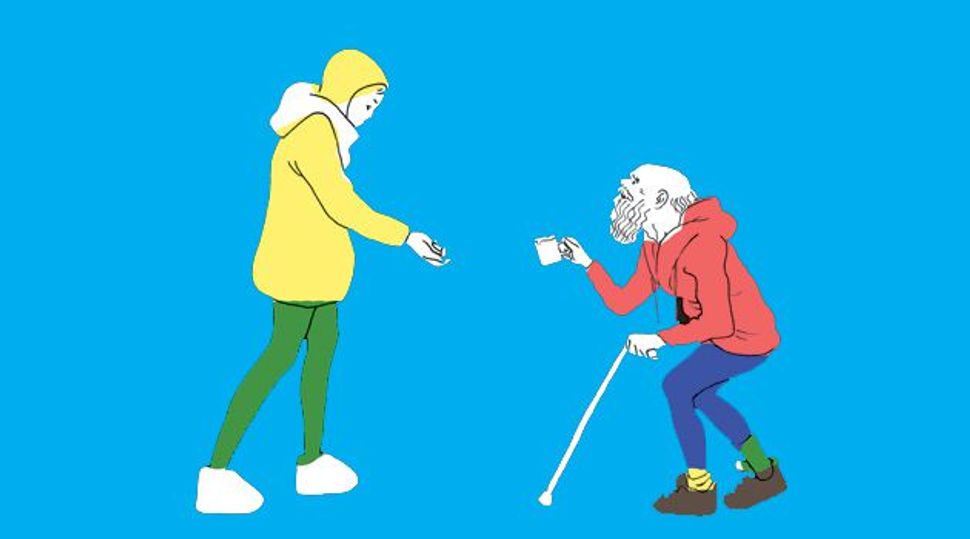 The face of the Other is where we see God in the world. At least that’s what Jewish philosopher Emmanuel Levinas tells us. And what could be more Other to a comfortable middle class Jewish boy than a homeless, dirty beggar? The euphemism “panhandler” is an Americanism designed to ease the confrontation. And what could be more frightening than seeing God in the eyes of someone who is begging for money you aren’t giving?

I hate carrying coins (it seems so prehistoric to transact with chunks of metal) so am usually doubly pleased to help out a soul who is less fastidious by putting my change into a hat or an open palm.

On the way to Friday night services when I was in college, a beggar asked me for money. I apologized, saying, “Sorry, I don’t carry money on Shabbat,” At which my friends burst out laughing.

We walked on but I felt uneasy. Responding to a person, even if they are sitting on the floor, is a mark of respect to their humanity, no matter their situation. By not paying attention to the type of response I gave I showed a careless lack of respect. And to give offense on Shabbat, a day of especial sanctity, felt wrong, doubly disrespectful.

In England, beggars tended to be the type who sat in a single place, with a hat and a sagging cardboard sign up in front of them. In America panhandlers of that sort existed, but there were often ones who were more forthright, more mobile, blurring the lines between asking for money and trying to con it out of you. On New Haven Green I was once accosted by a slender dark-skinned man who told me how he had come over from Africa to America where people had mistreated him and his mother and called them the n-word. Now he needed $15 to get back to her in New York. By virtue of his location, some performance issues and inconsistencies in the story, I deduced that his tale was untrue, but to have to tell such a lie to one stranger at a time to get money to live felt chutzpadik, almost entrepreneurial.

But of course, in America, the lines between panhandlers and pavement philanthropists are often racial ones. The people who are likely to throw a coin into a hat are those who feel guilty about that disparity and are especially susceptible to dramatic examples of racial unfairness (even if fictitious), since they come from a larger truth. That’s why that shpiel worked so well. Not well enough for me to give him money the second time he told the story, two years later, but well enough for me to think about the strange shapes that God takes in the world and how those shapes connect.

Finding God in the Other