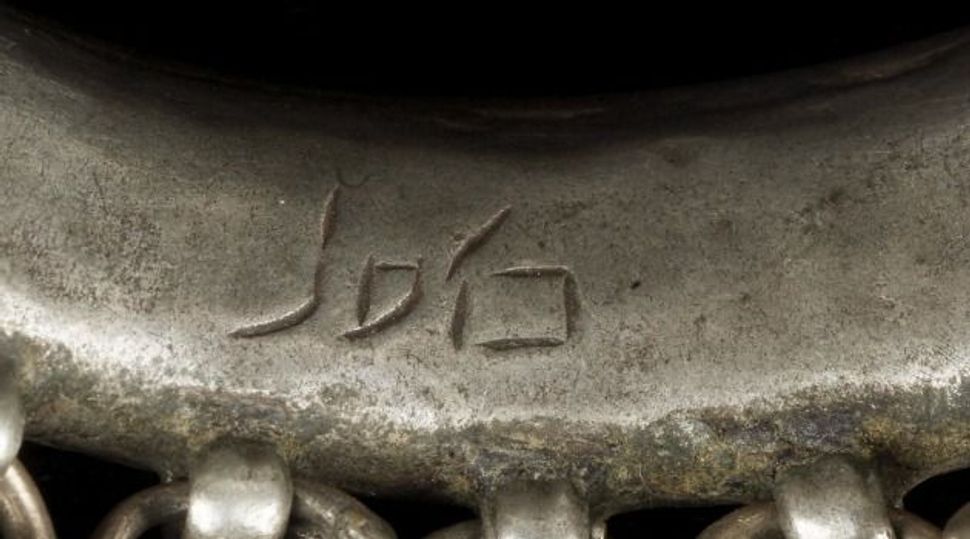 In a November 9 op-ed in The Daily Beast, Bruce Riedel, a senior Brookings Institution fellow, referred to Yemen and its Al Qaeda problem as “the scariest challenge facing Obama abroad.” Reporting two days earlier on a Yemeni security official killed in a drive-by shooting, the Associated Press cited officials, who said that at least 55 intelligence, military and police officers have been assassinated in Yemen since mid-2011.

What, if anything, can be done to salvage peaceful conditions in the Arabian Peninsula country is the subject of much foreign policy debate in Washington. But outside the Beltway, about 40 miles northeast of the U.S. State Department, a different and more nuanced portrait of Yemen emerges from “Diadem and Dagger: Jewish Silversmiths of Yemen,” which is on exhibit at The Walters Art Museum, in Baltimore, until January 21, 2013.

The few dozen items in the show include bracelets, necklaces, earrings, belt fittings and ceremonial daggers, all of which date from the 18th to the 20th centuries. The pieces come from the Rosalee C. Davison collections and the Zucker Family Trust, the latter of which was recently bequeathed to The Walters and to the Israel Museum.

The jewelry in the exhibit is the product of a particular time and place where Yemeni Jews didn’t enjoy rights equal to those of their Muslim neighbors: Jewish men weren’t allowed to wear ceremonial daggers, but Hebrew inscriptions on some of those very daggers indicate a special relationship between Jewish artisans and their Muslim patrons.

“I think [this exhibit] is a really important thing to do, particularly now, when you do need evidence of these interwoven histories,” said Amy Landau, associate curator of Islamic art and manuscripts at The Walters. “We just think about Yemen in the news today, and not that Jewish history is linked with this country, and so strongly.”

That Jewish artists signed their works is noteworthy, particularly given the tradition of anonymity in Islamic art. And the signatures, like brands, signified quality, Landau says. For visitors, the Hebrew and Aramaic inscriptions can be tough to decipher under the exhibit lights, but two signatures are reproduced in several-times-larger-than-life photographs that accompany the exhibit wall texts.

The inside of a bracelet, which dates between 1775 and 1809, clearly shows the name of the silversmith Yosef Cohen, although the last letter of the given name is formed strangely. A bracelet from the period of 1748 to 1775 is even more difficult to interpret. The exhibit identifies the artist as Kasil, but Landau admits that the top part of the alleged lamed looks like an accent, and the first vowel suggest a reading of Kosil rather than Kasil.

The typography of the inscriptions, as well as the larger context for the signed silver pieces, hasn’t been studied sufficiently and would make good doctoral thesis fodder, says Landau, who notes the theories that Yemeni Jews might have become involved in metals either because Muslims didn’t want to handle silver or because metals was a less-than-reputable profession, at least initially. Jews came to handle silver so well that the term “Jewish work” still indicates quality in Yemen, Landau adds.

There was no loss of metalworking traditions when there was a mass migration of Yemeni Jews to Israel in 1948 in Operation Magic Carpet — or On Wings of Eagles, as it is also known — according to Landau.

But according to Stefan Kirschner, an international relations graduate of New York University who visited Yemen in 2008, “When the Jews left Yemen, they basically took the craft with them, and the Arabs never really recovered from that loss.”

A 2009 Arutz Sheva article published by Kirschner detailed many anti-Semitic experiences on his trip. But Barbara Bodine, lecturer at Princeton University and American ambassador to Yemen from 1997 to 2001, says the average life of a Yemeni Jew is difficult, but no more so than for the average Yemeni.

“The communities were under threat during the fighting between the Houthis and the government in the mid-2000s, but the Jewish communities were not specifically targeted,” Bodine said. Even now, it’s not unusual to see Stars of David on the sides of buildings in non-Jewish Yemeni villages, says Bodine, who was told by the patriarch of the Yemeni Jewish community that Jews have been in the country “since before the beginning.” She added that Jews — who are estimated to number about 500 in Yemen — continue to be permitted to own land and to practice their religion freely.

“Some Yemenis wistfully wish the Jews would come back, if only because they were allowed under their religion to make wine from Yemen’s many varieties of terrific grapes,” Bodine said. “I asked the same patriarch why he did not go to Israel with everyone else in 1948. ‘Because I am a Yemeni’ was his answer.”

Menachem Wecker blogs on religion and art for the Houston Chronicle at blog.chron.com/iconia, and tweets as @mwecker.