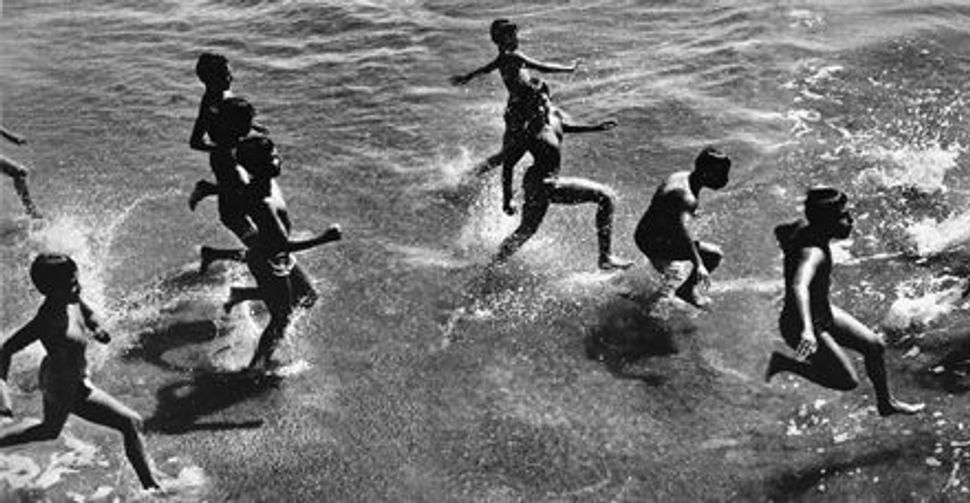 At age 81, the photographer Harold Feinstein is developing cataracts. But he’s been wearing glasses since he was a boy, and he scoffs at the idea of surgery.

“Imagine someone telling me I’ll see better,” he said with an impish grin beneath his flowing white beard. Feinstein is not one for false modesty. Early in his career, he may have suggested that his favorite photographer was Henri Cartier-Bresson, or the British master Bill Brandt. Yet for most of his life, he says, his favorite photographer has been Harold Feinstein.

And with good reason. Feinstein’s decades-long obsession with Brooklyn’s Coney Island, where he began taking pictures as a teen novice in the late 1940s, produced several images coveted by the museum curator Edward Steichen for his landmark exhibition “The Family of Man.” (Feinstein declined.) Feinstein went on to a long career as a beloved teacher, and in the past decade he has published several monographs featuring dazzling color studies of tulips, seashells, butterflies and other natural wonders.

Now the photographer’s work has been collected in “Harold Feinstein: A Retrospective” (Nazraeli Press), a long-overdue collection of 80 of his finest black-and-white photos, ranging from the rich pageantry of Coney Island at midcentury to Feinstein’s candid shots while serving in Korea for the U.S. Army and to his later nudes and landscapes.

Feinstein’s uncanny ability to capture a wide range of human emotions — bliss, defiance, melancholia — in the fleeting facial expressions of strangers on the subway or on the boardwalk marked him from a young age as a gifted shutterbug. Later in life, when he began to explore the female form, as so many of his predecessors had done, his gaze was unfailing.

“I had a thing for looking, period. I was a natural voyeur,” he said recently, sitting at the long country dining table of the home he shares with his wife of 25 years, Judith Thompson, in semi-rural Massachusetts. Though he left New York City for towns in New Jersey and Pennsylvania decades ago, he’s stamped with vivid, carnivalesque memories of growing up in Coney Island.

“I think I was still nursing on my mother’s breast when I heard the screams of the girls on the Cyclone,” he said, adding that he still pictures himself with a Nathan’s hot dog in one hand and a custard (“They didn’t call it ‘soft-serve’ ice cream back then”) in the other.

Eventually, however, he had his hands full with something else — the 35 mm “brick,” the popular, budget-priced Argus C3, which he got as his first camera when he was 15. Feinstein’s father, a Russian immigrant who worked as a meat wholesaler, paid for it, despite his misgivings about photography as a career path for his youngest son.

But his parents were the encouraging sort, Feinstein recalled. “As long as you could make a living,” he remembered them saying.

Throughout his life, Feinstein has demonstrated a unique ability to balance innate confidence in the value of his work with a certain lightness of being.

“I took myself very seriously right from the beginning,” he said, “but I didn’t make a whole megillah out of it.” After serving in Korea, Feinstein took up residence in an almost mythically bohemian loft space in New York City, a vermin-infested commercial walk-up on Sixth Avenue. The cast of characters there included painter David X. Young, composer Hall Overton and, a little later, the legendarily obsessive photographer W. Eugene Smith, who began recording the many jazz musicians (among them Charles Mingus, John Coltrane and Sonny Rollins) who sat in on after-hours jam sessions on the upper floors of the building that became known as The Jazz Loft.

Feinstein gained recognition quickly, earning exhibitions at the Whitney Museum of American Art and at the Museum of Modern Art before he reached 30. He designed album covers for Blue Note and other jazz labels, and he worked for Modern Photography and Popular Photography magazines.

Still, he never quite achieved the same level of acclaim as some of his contemporaries, such as Smith, who once praised his close accomplice as “one of the very few photographers I have known, or have been influenced by, with the ability to reveal the familiar to me in a beautifully new, in a strong and honest way.”

Though Feinstein has not lived in New York City in ages, he remains a quintessential product of the boroughs. As a young man he worked as a soda jerk at a busy shop in Brooklyn where he could make six egg creams at once, as he still likes to boast. Years later he was approached on the street by someone who recognized him. Thinking the man was about to praise him for his photos, he had to laugh when he said, “Didn’t you make those great egg creams?”

Feinstein says he was initially attracted to photography because of its simplicity. For years he had a self-imposed rule: Don’t crop.

“The quickness and your relationship to the moment determine the image,” he said. “Sometimes I didn’t even pick the camera up to my eyes.”

Yet over the years he has found inspiration in darkroom techniques and digital manipulation. He was an early adopter of Photoshop. For him, it’s all the same, whatever the purists might say. He just loves to make pictures.

“I still remember drawing a picture in the second grade, and the teacher said, ‘Harold, you’re an artist,’” he recalled. “It was the first time I heard that word.”

For him, the ubiquity of cell phone photography doesn’t dilute the form at all: “My feeling is, ‘Jump in — the water’s great.’” That’s how he always taught his classes, in which he preferred to take on the beginners because he could, he felt, “make the most important impression on them.”

He began teaching in 1959, at what was then the Annenberg School of Communications at the University of Pennsylvania’s graduate school, and he taught over the years at institutions in New York, Vermont and Massachusetts. Feinstein’s classes often began with the instructor regaling his students about the power of openness. “The word ‘yes’ is a key word in what I believe,” the instructor would say. “There are a hundred reasons for ‘no,’ but they never produced anything.”

Barbara Alper, who has work in the collections of the New York Public Library and the Brooklyn Museum and now shoots for Newsday, is one of many accomplished photographers who have studied with Feinstein. She signed up for one of his private classes in the early 1980s on the recommendation of her friend A.D. Coleman, the first photo critic for The New York Times.

As a teacher, Feinstein was “always very upbeat and encouraging,” said Alper, who has stayed in touch with him over the years. “He helped you fine-tune your vision…. He has a sense of wonder, a joy about life.”

Even now, as his memory begins to take on the haze of overexposure, he’ll find something to catch his eye out the window of his bedroom. When your mouth drops open, he is fond of saying, click the shutter.

“Wait till you see the pictures I haven’t taken yet,” he said.

James Sullivan is the author of several books, a contributing editor for Rolling Stone and a regular contributor to the Boston Globe