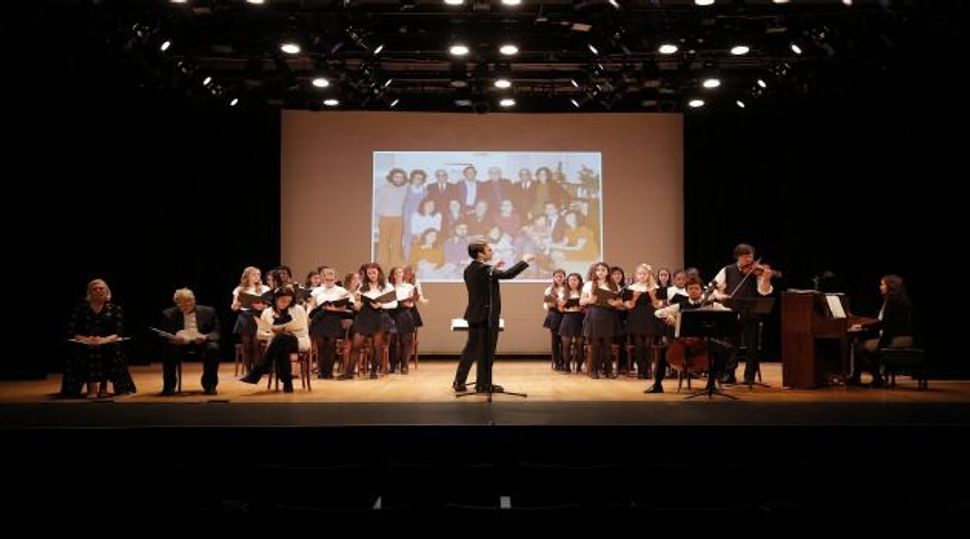 Image by The Public Theater

Imagine that, instead of a Middle East ruled by tyrants, riddled with militants and ruined by war, the region was a model of cosmopolitan tolerance and sophistication, where people of all creeds and faiths live in harmony.

In her memoir, “A World I Loved: The Story of an Arab Woman” (Nation Brooks), published in English in 2009, Wadad Makdisi Cortas describes having nurtured this vision throughout her childhood in the early years of the 20th century and struggling to hold on to it during the chaotic decades since then. The memoir has been repurposed for the stage by Vanessa Redgrave and by Cortas’s daughter, Miriam C. Said (widow of the influential Palestinian literary theorist and cultural critic Edward Said), and recently it was presented at the Miller Theatre in a co-production between Columbia University and The Public Theater.

I hesitate to call the presentation a piece of theater. It was more an educational than a theatrical event, a staged reading with musical interludes performed by a string trio and the Spence Middle School Chorus, as historical maps of the Middle East and period photos were projected in rotation with Cortas’s family photos on a scrim at the back of the stage. The event brought to mind nostalgic visions of an elegant New York society revolving around intellectual life: couples in evening dress, attentive in a darkened auditorium, bettering themselves by listening to a public lecture that is part memoir and part history lesson, accented with periodic chamber music. It’s the very sort of event that Cortas must have imagined becoming commonplace in Beirut, the sort of charming, elegant event that you walk away from feeling like a bigger person for the experience.

After a brief introduction by Said in which she described the memoir as a “testament to a largely unknown history,” Redgrave, reading directly from the memoir, took the audience through the events of Cortas’s life, from her days as a student at Ahliah School for Girls in Beirut, to her years of teaching there, to her retirement in 1974 as principal of this very same school. Letters and testimonies from students at the school were read by her granddaughter, Najla Said. Voices from the artistic and intellectual circles in which Cortas ran were read by the Jordanian actor Nadim Sawalha.

We were taken through the paces of a 20th-century life as lived by a sensitive, intelligent woman who cared about culture, adored the arts and took an avid interest in the events transpiring in the world around her. As a student at the American University of Beirut, she entered into a “liberal bastion,” “a vision of hope,” where she learned “respect for the ties that bind one to another.” As teacher and then principal, she strove to create a cosmopolitan educational environment where Western ideas were presented alongside non-Western ideas, and where students were encouraged to engage with all of them, to appreciate the arts and cultural riches of all people without fear of losing their Arab identities.

When the girls from The Spence School took their places onstage and began singing choral pieces by Mendelssohn and Handel, I had two thoughts at once: that The Spence School probably had a lot in common with the Ahliah School, where Cortas taught, and that Cortas must have been similar to my Jewish grandmother, reading The New York Times every day and driving into the city from her home on Long Island as often as she could, so that she could listen to the symphony at Lincoln Center. Cortas and my grandmother loved the same things; they both yearned for a world under the influence of an educated humanism that has been all but lost in our current cultural and political climate.

Because of the time and place in which Cortas lived, though, the story of her life is about much more than just this. History can’t but intrude on it. We learn of the dream of a “united Syria” under Prince Faisal. We learn how “deplorable events all over the world had weakened our youths’ trust in Western Civilization.”

The very short version of her take on events is this: European power promised an autonomous unified Arab nation and then took it away, betrayed the Arab people, and systematically put in place an economic and political structure that created a vacuum of power in which ideologies like Zionism and Islamic fundamentalism destroyed the tolerant and cosmopolitan society that had been poised to rise out of the remnants of the Ottoman Empire.

Many Jewish readers might recoil at this, but I believe it’s important to hear Cortas out, just as it’s important to understand her son-in-law Edward Said’s correctives to our biases about the otherness of the Arab peoples. Our assumptions about cultures not our own can’t help but be influenced by the narratives that allow us to believe what our hearts want us to believe. The narrative we’ve been given about the Arab people has been distorted by the Zionist dream, and our assumptions have been distorted by the historical and contemporary need to paint the conquered as deserving of their fate.

In the wake of the Arab Spring, with the spirit of self-determination reinvigorating people across the Middle East, even as gruesome events unfold daily in Syria, and as ever more aggressive actions are being taken on both sides of the conflict over the occupied Palestinian territories, it’s worth revisiting what brought the region to its current state — not just through the lens of the official Zionist narrative, but from the Palestinian point of view, as well.

As Cortas says near the end of the presentation: “For more than 60 years, the world has been going mad. Not the honest nor the brave, but the mighty have been its master. The Arab nations are insecure, and despite its nuclear weapons, Israel is insecure. No border is ever secure without mutual trust and understanding.”

Joshua Furst is a frequent contributor to the Forward. He’s the author, most recently, of ‘The Sabotage Café’ (Vintage, 2007).