Documenting The Other Kindertransport 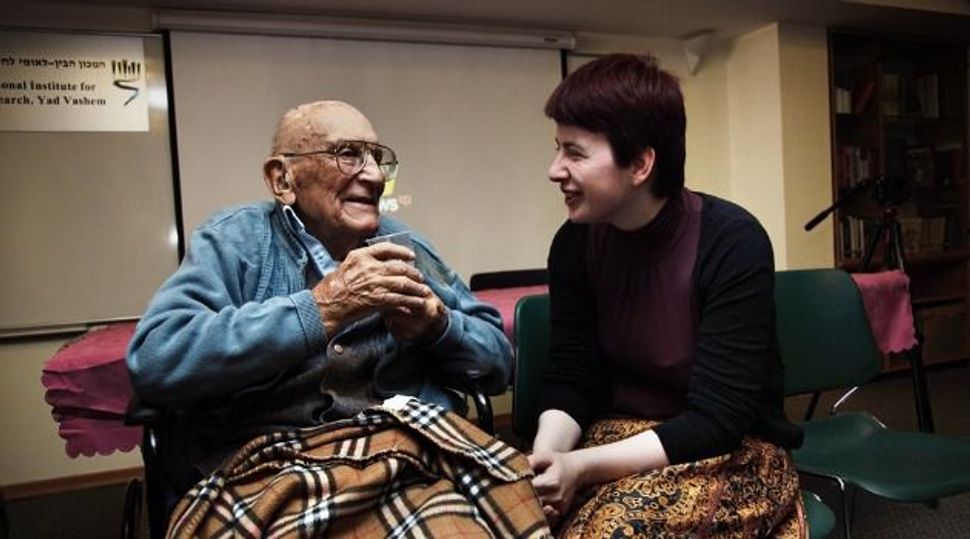 Documenting Their Stories: Dan Yaalon left Czechoslovakia in 1939. He went to Denmark where he stayed until 1941 when he left for Palestine. Now he lives with his family in Israel. He is pictured here with Judith Matyá?ová. Image by Courtesy Judith Matyá?ová

In 2009, a group of school children in the Czech town of Velký Beranov was doing research for a project called “Neighbors Who Disappeared” — an effort to get kids to understand all those who are missing from their towns, their cities, their world. Together the kids discovered the strange, melancholy story of Helena Böhmová: She had sat for a portrait, in a photography studio, in 1942. Böhmová never returned to pick up her picture, but the photographer had saved it for her and wondered about her fate. The children told the story to the national Czech newspaper, Lidové Noviny; the photo ran with the story, which assumed that all who had known Böhmová had been deported and murdered. But actually, one cousin had survived.

Helena Böhmová “was my cousin,” Susana Federer wrote to Judith Matyášová, the author of that story. In her letter, Lederer explained that she had been chosen from among three sisters to go on a children’s transport to Denmark. She was the only member of her family to survive. It had been, she said, a Sophie’s choice for her mother. Subsequently, she lost touch with her friends from the transport. Could anyone help her track them down?

Matyášová, 32, quickly became obsessed with the story of these forgotten kids. She is desperate to capture the stories of the “children” of the Czech Kindertransport before those stories are lost. She has spent the past few months traveling, starting from Prague and heading to Israel, to Denmark, to Sweden, interviewing not only as many of the children themselves that she can find, but also those that sheltered them. She has given interviews to Danish and Swedish papers, and tracked down the families that took in the Jewish teenagers.

Matyášová’s goal is to make this project a book, a film and a series of articles. But she is also strapped for cash and can’t quite figure out why no one sees how dire the need is, how there is no time to waste writing grant proposals when eyewitnesses are 89 and 90 and a few months may mean the difference between a first-person account and death.

“One hundred and fifty people spent three years together,” Matyášová explained on a recent brisk October morning in Prague. “And then in 1943 they escaped to Sweden, and after the escape they did not see each other again. You couldn’t have such a big group; you had to hide them. So from 1943 they escaped to Sweden every person by boat and they lost contacts for more than 70 years, and I started to search them all around the world and I found some 30 of them.

In October, she arranged a reunion for the 30 — who flew in from South Africa, from Canada, from Prague. “Our team of the nonprofit organization Czechs Abroad has been searching for these survivors all around the world, since January 2011,” Matyášová explained. “All research work, all travels, documentation, all filming has been paid out of our own pocket. There [has been] no time for grants, no long-term finding of sponsors. Time is running out, and now is the last chance to save this unique story. If we wait, the story will die. We have only weeks, perhaps months, to find the ‘children.’”

“Interesting story. Good luck,” she said, imitating what sponsors have said to her. “We really appreciate the moral support, but unfortunately it is not enough. Without financing we cannot continue, and we cannot preserve this story.”

Documenting The Other Kindertransport