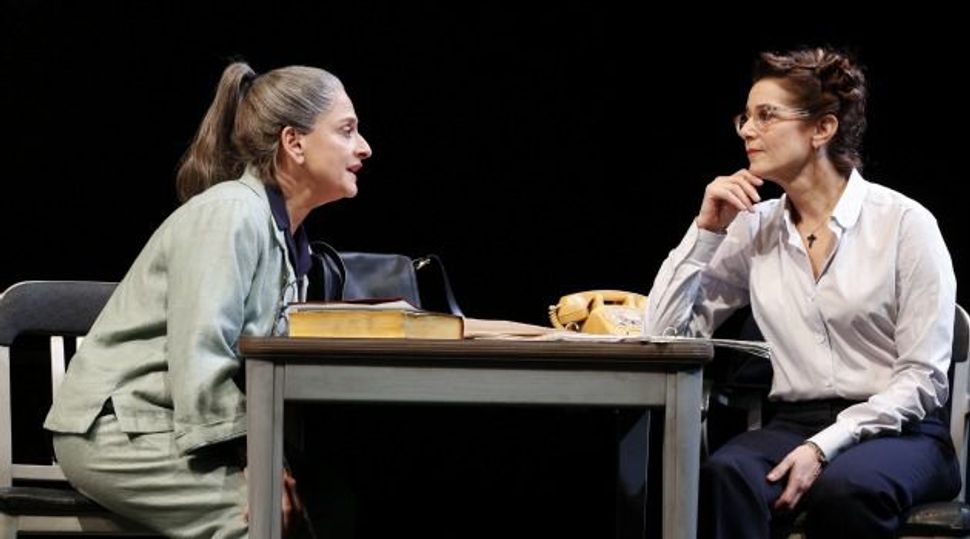 A Death in the Theater: Patti LuPone and Debra Winger butt heads in the recently closed production of David Mamet?s ?The Anarchist.? Image by Joan Marcus

Posted outside the Golden Theater on 45th Street — where, until recently, David Mamet’s newest play, “The Anarchist,” was running right down the block from his masterpiece, “Glengarry Glen Ross” — is the full text of an opinion piece Mamet wrote for The New York Times in November entitled “Considering the Excesses of Protest.”

In it, he describes his dismay, in the days after 9/11, over the ambiguously unrepentant stance taken by Weather Underground alum Bill Ayers toward his radical behavior in the 1960s and ‘70s (behavior which, of course, had absolutely no relation to events of that sad day). Mamet relates a variety of anecdotes meant to prove that he tried, at least nominally, to give the radical left’s ideas a fair hearing.

He goes on to pose what he claims is the “moral dilemma” his new play is about: What is to be done with those who have been convicted and jailed for a violent political crime once they’ve fulfilled the terms of their sentence? Shouldn’t they continue to be punished if they have not repudiated the political beliefs that led them to commit the acts in the first place? “Is it not inconsistent, the convict argues, that the jailer employ the political motive — a motive denied by the court — to continue the punishment?” he asks, confusingly, in summary.

Like much of Mamet’s recent nonfiction output, it’s a breathtakingly reductive piece of writing that uses the pretzel logic, fear-mongering and insinuation tactics usually found only on Fox News to ostensibly promote a Broadway play.

The politics on display in this short essay are atrocious. Mamet seems to have forgotten that the free speech he himself is exercising allows for people to hold unpopular, even dangerous ideas. He seems to earnestly believe that certain leftist ideas should be punishable by the state.

What’s equally disturbing about the essay, at least to this reader, is that it’s also a fair record of Mamet’s current thinking about what art is and what art does: “Drama,” he writes, “aspires to be a consideration of a moral dilemma, and tragedy must be such. A moral dilemma is one with no good, but with only one better, answer. As such, a moral decision requires courage, as one party or cause having a just claim is to be caused pain. (If the party had no just claim, it would not constitute a dilemma, as between good and evil there is no choice.)”

If I understand him correctly, he believes art is a place where moral verdicts are rendered, and its purpose is to lead its audience toward seeing the justice in the author’s beliefs. By those lights, “The Anarchist” is a fair example of how he’s translating this aesthetic stance to the stage.

The simple premise of the new play is that an elderly woman who was once a member of a politically radical group and has been in jail for decades after having killed two people in a robbery is up for parole. The play consists of an interview she gives to the prison official whose job it is to recommend whether she should or should not be released.

There’s not a lot of drama here, but Mamet seems uninterested in drama at this stage in his career. His late plays are more like Socratic dialogues — or talmudic debates, if you prefer — for the stage. In “The Anarchist,” the big subject is whether crime consists of the act or the intention. It’s a worthy subject for debate. But within the first five minutes of the play, when ad hominem attacks on the French for being so, well, French, begin flying, one gets the sense that Mamet made up his mind about the subject long before he picked up his pen.

He isn’t so much interested in exploring both sides as he is in instructing us what to believe: People who dare to question the righteousness of the state are dangerous to our civil society, and they should be punished for these beliefs. For him there is no dilemma here, and thus, no drama, no tragedy — just a propped-up trial and sudden moralizing judgment.

The problem is that great art doesn’t pass moral judgment. It doesn’t bludgeon its audience into understanding that there is only one right answer, and that this right answer belongs to the artist. That’s the purview of position papers and, maybe, in a pinch, Ayn Rand’s wretched oeuvre. What great art does is point toward multiple possibilities and remind us that they all have their costs.

Mamet knows that. Or he used to know it.

Unlike his recent work, his early plays were about the mechanisms of power, to the near exclusion of everything else. Whatever their ostensible subject may have been, the drama on the stage revolved around the cunning and conniving and conning and winning and losing that capitalism demands of us. But he didn’t tell us this bluntly. Instead, he showed us power in action through the situations and language he flung across the stage. He exposed how our American language can be abused for the purposes of power, the way our language lies and the way it cuts. The characters in “American Buffalo,” “Glengarry Glen Ross,” “Speed-the-Plow” and even “Oleanna” (which in retrospect seems to have pointed the way forward for Mamet’s late dialectic aesthetic) had so much life surging under their obscene and fragmentary words that it didn’t matter whether Mamet agreed with or condoned their actions.

So why is Mamet’s new work so diminished? Is it his obsession with right-wing politics? He he has the right to believe whatever he wants, of course. As far as I know, he’s always leaned to the right. And even if he hasn’t, rightward political slides late in life didn’t stop Knut Hamsun, Fyodor Dostoyevsky, Ezra Pound, or Norman Mailer from continuing to create art of the finest order.

So it must be how he handles his politics. When political art is successful, its politics are nestled in something more — a nuanced reality, an unforgettable metaphor, a poetics, a character or group of characters who have struggles and failings beyond the political point the author is trying to make — and this more-ness distresses, abstracts, transforms the author’s ideas, lifting the work out of the stink pit of propaganda and into the realm of art.

Mamet’s new work has none of the linguistic syncopation of his early work. It’s also lacking the sense that he understands that there are multiple sides to a story. When an artist believes he is the sole bearer of truth, it’s easy for him to forget that the nuance and surprise art can sometimes attain has more to do with the grace with which the artist handles the contradictions inherent in the human animal than with the righteousness of his cause. Mamet has rid himself and his work of contradiction. He now — simply, bluntly — believes he is right and you are wrong.

Joshua Furst is the author of “The Sabotage Café.” He is a frequent contributor to the Forward.