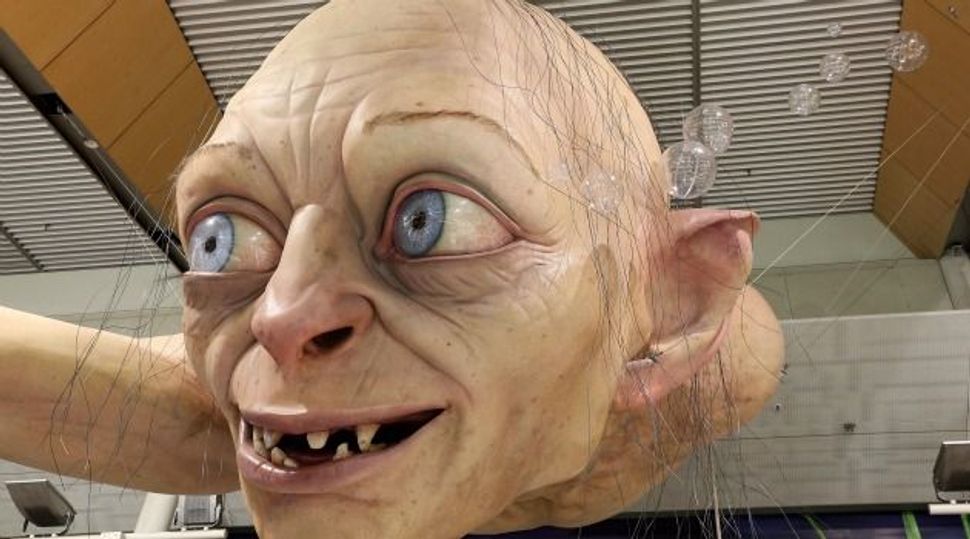 The Gollum of Middle Earth: Might Tolkien?s character be a nod to the mythical creature of Jewish legend? Image by Getty Images

Undoubtedly some will view “The Hobbit: An Unexpected Journey” — the first in a trilogy of films based on J.R.R. Tolkien’s book “The Hobbit,” directed by Peter Jackson — and find in Tolkien’s mythical creatures not-so-subtly stereotypical representations of Jews.

In particular, the clannish behavior and financial habits of the dwarves (as opposed to the elves, the Men and the hobbits), which are a gold-obsessed race that have been exiled from their homeland and among their own kind speak a unique language while learning the vernacular of their territory, will suggest to those looking for a correspondence a portrayal of Jews based on medieval stereotypes.

But Tolkien is one of the more unlikely figures in modern literary history on which to pin a badge of Jew-hater. In fact, Tolkien was something of a Judeophile. A philologist by training, he was familiar with Hebrew, and while he did indeed acknowledge basing his dwarves’ speech on Semitic languages, this was hardly the act of an anti-Semite. “I do think of the ‘Dwarves’ like Jews: at once native and alien in their habitations, speaking the languages of the country, but with an accent due to their own private tongue,” he once wrote.

Although Tolkien refuted attempts to interpret “The Hobbit” and his “The Lord of the Rings” trilogy as allegory, it’s been remarked time and again that in no small way, Tolkien’s opus was to some extent a corrective rewrite of the Wagner Ring trilogy, particularly the composer’s overtly anti-Semitic representation of Jews as evil dwarves.

Both stories, of course, are quests for a magical ring. Both are populated with characters based on Norse mythology. Tolkien loved the old myths, and he was disgusted by Wagner’s perversion of them in the service of creating a modern racial mythology.

Tolkien was given the opportunity to stick it to Wagner posthumously — and he did, when he stood up to Adolf Hitler’s Nazi regime in its attempt to co-opt him to the Nazis’ side. When a German publisher that wanted to put out a German translation of his work requested verification that Tolkien was of pure Aryan blood, which Tolkien believed to be a not-so-subtle inquiry into whether or not he was part Jewish, Tolkien refused to play ball.

In a letter he drafted in response to the request, he replied, “I regret that I am not clear as to what you intend by arisch. I am not of Aryan extraction: that is Indo-Iranian; as far as I am aware noone (sic) of my ancestors spoke Hindustani, Persian, Gypsy or any related dialects. But if I am to understand that you are enquiring whether I am of Jewish origin, I can only reply that I regret that I appear to have no ancestors of that gifted people.”

And to a friend, he wrote, “Do I suffer this impertinence because of the possession of a German name, or do their lunatic laws require a certificate of arisch origin from all persons of all countries?… Personally I should be inclined to refuse to give any Bestatigung [confirmation] (although it happens that I can), and let a German translation go hang. In any case I should object strongly to any such declaration appearing in print. I do not regard the (probable) absence of all Jewish blood as necessarily honourable; and I have many Jewish friends, and should regret giving any colour to the notion that I subscribed to the wholly pernicious and unscientific race-doctrine.”

But what of Gollum, the fallen, misshapen and murderous hobbit who dwells in an underground cave and is obsessed with the ring that Bilbo Baggins (the hero of “The Hobbit”) steals from him? Is Gollum a nod to the Hebrew Golem? Has everyone been mispronouncing “Gollum” — which in the movie versions is always rendered as “Gah-lum”?

There is no reason to believe that Tolkien was in any way modeling Gollum after the mystical Jewish legend of a creature that was manmade by a Prague rabbi to protect the Jewish community, for there is absolutely no resemblance between Tolkien’s Gollum and Rabbi Judah Loew’s Golem, other than the letters “g,” “l” and “m.” Sometimes a dwarf is just a dwarf, and a Gollum is just a Gollum. So just sit back, relax, and enjoy the movie.

Seth Rogovoy is a cultural critic and the author of “The Essential Klezmer” (Algonquin Books of Chapel Hill, 2000).