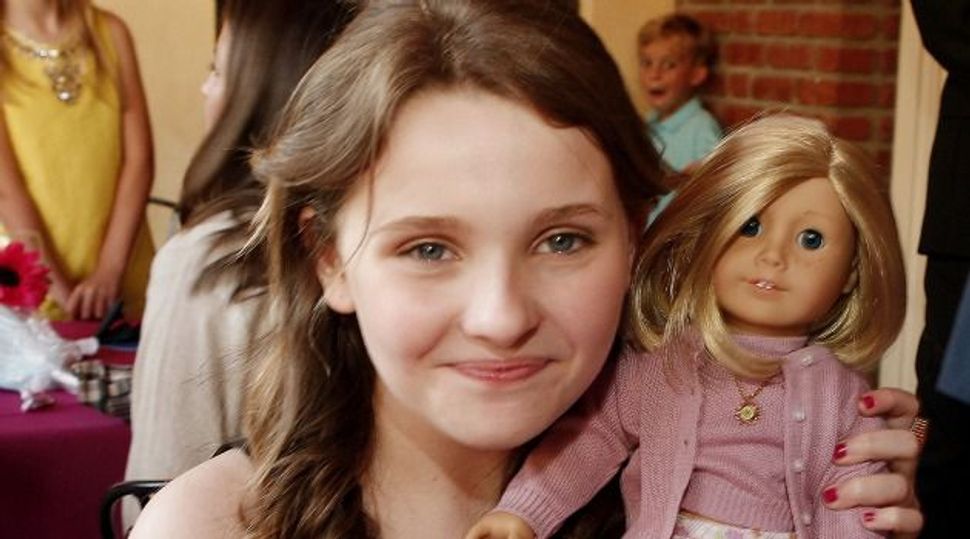 My Girl: The actress Abigail Breslin poses with an American Girl doll. Image by Getty Images

I was never a Barbie kind of girl. While my friends collected armies of pink, plastic mannequins — oh, the sequined gowns and magenta workout getups and never-ending ponytails of faux blond locks, not to mention Barbie’s Corvette and three-story dream house, complete with working elevator, garage and pool — I was given educational toys. That’s what happens when your parents are historians. (My mother, a professor of women’s history at Tufts University, eventually caved and let me have Day-to-Night Barbie, but only because, unlike most of the other Barbies, she had a job.)

And so I grew up on Jane Austen, my imagination and American Girl dolls, the doll/book franchise that launched in 1986, when I was 5 years old, bringing American history to life through the stories of fictional girls in different historical periods. An educational alternative to Barbie that came highly recommended by my parents’ friends? Needless to say, my parents were sold.

When I was growing up, there were three American Girl dolls: Kirsten Larson, a blond-haired pioneer girl who immigrated to America from Sweden and settled in Minnesota in 1854; Samantha Parkington, an orphan being raised by her wealthy grandmother in New York City in 1904, and Molly McIntire, a patriotic girl with brown hair, braids and eyeglasses living in Illinois during World War II. American Girl dolls were so much more than playthings.

Each came with a six-book series that told the girl’s story, introduced history lessons from her era and served up teachable moments about friendship, family, education and the world. And along with each book came an outfit and accessories for the doll, plus matching life-size outfits for you.

As indulgent as all this sounds, today’s American Girl experience makes my own look like it occurred in the preindustrial era. Now there are more than a dozen historical dolls, an entire line of baby and design-your-own dolls, movies, a magazine and three flagship experiential retail stores offering up everything from dining and photo shoots to party packages. Nevertheless, I was quite content with Samantha. While I looked nothing like her (she had long brown hair, perfectly placed curls and big brown eyes; I had stringy blond hair, hazel eyes and glasses), I was totally enamored by the romance of her Victorian era, and besides, she came with the best accessories and outfits — bows, pretty dresses, petticoats, a brass bed, even plastic petit fours.

My best friend, Jamie Sand-Goldberger, had Samantha, too. Jamie and I became friends on the first day of kindergarten because we were the only two kids in our class with hyphenated last names (my full name is Abigail Goldsmith Drachman-Jones; if you have a hyphen, you understand this kind of bond). Jamie and I grew up five minutes apart in the suburbs of Boston, and our friendship unfolded over after-school activities (jazz, tap, ballet, softball, soccer, painting and sculpture classes — you name it, we tried it), make-believe games (we played “Office” in her parents’ basement and “Travelers” in mine) and of course our American Girl dolls. Jamie looked a little like Samantha — thick brown hair, brown eyes and an infectious smile. And, like Samantha, she always had a sharp sense of style (by second grade, Jamie was wearing outfits we didn’t even know were outfits). Wherever the two of us went, our American Girl dolls followed.

One of my favorite activities was hosting tea parties on my bedroom floor. We gathered together as many dolls as possible — both Samanthas; my sister’s Molly doll; my mother’s Ginny dolls, saved from her 1950s childhood; plus Eloise, Spot the Dog and another stuffed animal or two — and propped them up in a circle around a makeshift table, typically a book or a stack of magazines. In the middle, we arranged Samantha’s plastic party accessories. Sometimes we added real food. Sometimes we poured orange juice. Often we mixed a concoction of shampoo, shaving cream and other mysterious bottled liquids found in my parents’ bathroom and served it as dessert.

We adored everything about our American Girl dolls — the books, the outfits, the fact that we could dress up like our dolls in life-size matching nightgowns that we begged our parents to get for us. But something was still missing: an American Girl doll just like us.

Samantha was an orphan, Molly came from a Scottish-American family and Kirsten emigrated from Sweden. These were all interesting stories, but none of them reflected the Jewish upbringing Jamie and I shared. So we did the only thing we could think of: We dreamed up a new American Girl doll — a Jewish one — and named her Rachel.

Rachel had thick brown hair and wore kerchiefs, headscarves and loose-fitting dresses (think “Fiddler on the Roof” for the 20th century). She carried a plaid suitcase and came with a host of other trimmings, and we drew each and every outfit on small rectangular pieces of paper that we planned to mail to the American Girl company in hopes of convincing them to mass-produce our doll. We also wrote down Rachel’s life story, including how she and her family immigrated to America through Ellis Island, bringing their hopes and dreams to a new country. Inspired by stories our families told us around the dinner table, as well as by lessons we learned in Sunday school, we brought Rachel to life. Finally we had a doll we could relate to.

Little did we know, another Jewish doll did exist at the time. Well, kind of. Her name was Poor Pitiful Pearl, and she was one of the first dolls my parents ever gave me (I called her “Pitty” because I was too young to pronounce her full name). Poor Pitiful Pearl had thick, strawlike hair, a button nose, floppy eyelids and a hesitant smile, and she came with two outfits: a tattered dress with a red babushka and a party dress with pearls. New Yorker cartoonist William Steig created Poor Pitiful Pearl in the 1950s. While Steig was Jewish, he kept the doll’s Jewishness understated, reflecting the era’s emphasis on assimilation. Still, her “poor” outfit reflected Jews immigrating to America from Eastern Europe, while her fancy dress represented the American dream of upward mobility.

For obvious reasons, Jamie and I did not see ourselves in Poor Pitiful Pearl, nor did we even consider her as an alternative to our American Girl dolls (though I must add that, to this day, Pitty still sits in my childhood bedroom, looking just as pathetic as ever). But her story of the rise to respectable middle-class girlhood from poverty was much like Rachel’s, our fictional American Girl doll.

Finally, in 2009, American Girl caught up with us and debuted Rebecca Rubin, a Russian-Jewish girl living on Manhattan’s Lower East Side in 1914. Jamie and I are long past our doll days, but we remain good friends. She is now a marketing director in the music business, and we both live in New York City. When I called to tell her the news about Rebecca, Jamie blurted into the phone, “They totally stole our idea!”

Abigail Jones is the digital features editor of the Forward. She can be contacted at [email protected] and on Twitter @AbigailDJ