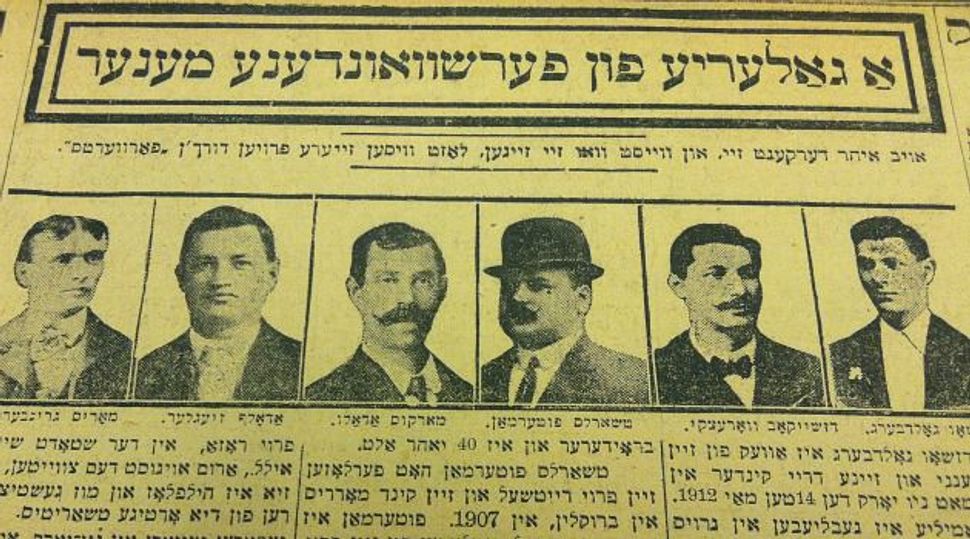 Century Ago: The Forverts highlighted a gallery of men who had gone missing in a 1913 issue. Image by forward

New York City cigar maker Charles Weiss may not look like much, but he apparently knows how to treat the ladies. Arrested for bigamy, he initially denied everything. But when he showed up in court to find his three wives chatting amongst themselves, he knew he was busted.

Wife No. 1, Annie Heller, married Weiss three years ago and knew him as “Martin Yambach.” They have one child together. Wife No. 2, Lina Weissberger, told the court that she met Weiss six months ago and was introduced to him with his real name, but also as a widower with three children for whom she has been caring. Mrs. Weiss No. 3, the former Ida Krantz, was holding a baby that, it turned out, belonged to wife No. 2. Married to Weiss just two months ago, she said that after he sold all her jewelry to fix up the house, he began disappearing.

Krantz became suspicious and followed Weiss to a house in West Harlem, where she discovered that he was living with Weissberger. When the judge asked Weiss what he had to say, all he could mutter was, “I’m guilty.”**

In a continuing effort to destroy Jewish life in Germany, the Nazi Party has developed a new plan to make it even more difficult for Jewish businessmen to function both domestically and internationally. According to a recently published government plan, import quotas are to be placed on goods produced by Jewish-owned firms, denying the firms the possibility of profit on their sales. Additionally, domestically produced raw materials will have their quotas reduced by 10% if the firm owners are Jewish.

A number of Jews were attacked and wounded in pogroms that took place in the cities of Tashkent and Margelan in the Soviet Republic of Uzbekistan. It was alleged that a Jewish woman in Margelan, Mazal Yusupova, kidnapped and murdered a 2-year-old child in order to use his blood for “ritual purposes.” Police arrested both the woman and her 90-year-old father on charges of kidnapping and murder. A local radio station broadcast news of the arrests, which incited various precincts of the local populace against the Jews. Making matters worse, the police refused to protect the Jewish quarter.