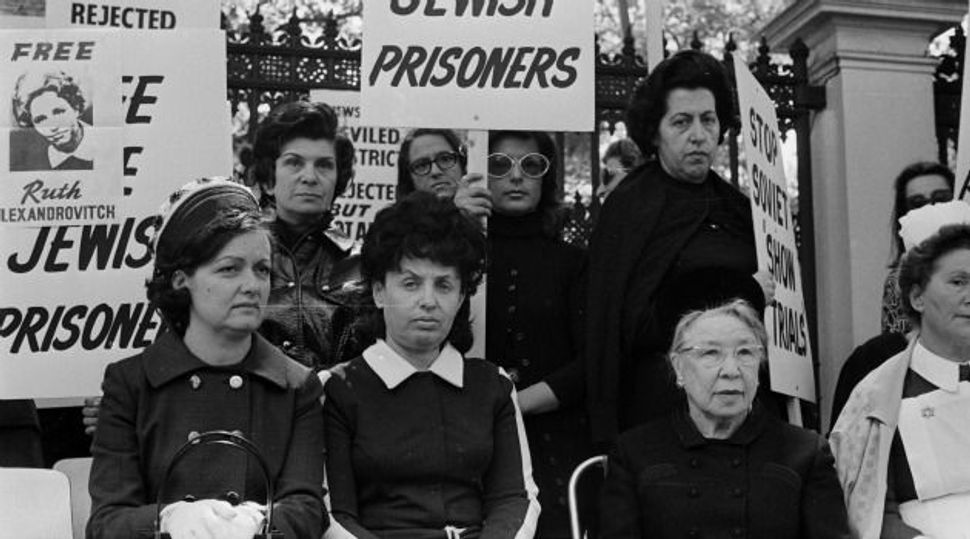 Movement: In 1971 women protested outside the Russian Embassy in New York against the trial of four Jews for anti-Soviet activity. Image by Getty Images

The threats and danger of blood libels and pogroms are well known in darkest Russia. In America, we didn’t seem to have to worry about blood libels. Or so we thought. Jacob Miller, a resident of Creighton, Pa., was organizing a big party for his son’s bris. He hired a shokhet to slaughter all the chickens and ducks he bought, and arranged for a neighbor to prepare the animals. He also asked his housekeeper, a local girl by the name of Anna Hanzel, to help out. But as the neighbor, Mrs. Stein, was sharpening the knives, 16-year-old Hanzel, thinking of the stories she’d heard about Jews as a child, started screaming, and neighbors came out of their houses. Someone pulled a fire alarm. As chaos ensued, Hanzel ran from the house, into the woods. Some nasty locals began to spread rumors that the Jews had killed her. As a result, the Millers spent a sleepless night. Hanzel was found the next day, safe and sound, and the locals relented.

Juliet Poyntz, the famed American communist who disappeared a few months ago, is thought to have been kidnapped by Shakhne Epstein, former editor of the Yiddish communist daily, Freiheit, on orders of the Soviet government. Carlo Trieste, the Italian radical and anti-fascist, made the accusation. Epstein is the likely suspect, since he appeared mysteriously in New York last June, around the time Poyntz disappeared. While Epstein was in town, Freiheit kept silent, unusual for the newspaper when its former editor visits from the USSR. Epstein was seen on the street by acquaintances, so it is certain that he was in New York. It may be a long time before the case is solved.

According to the Soviet ambassador in Washington, D.C., Jews in the USSR are entitled to practice their religion and will be permitted to bake matzos for Passover. The statement was made after Rabbi David Hill, president of the Orthodox youth organization, Young Israel, visited the embassy. Hill said that the meeting went well and that he asked to visit the Soviet Union to see that Jews are permitted to practice their religion freely, a suggestion that, Hill said, was accepted as a real possibility. He also got the impression from his hosts that last year’s ban on the baking of matzos was actually the result of a clerical error.