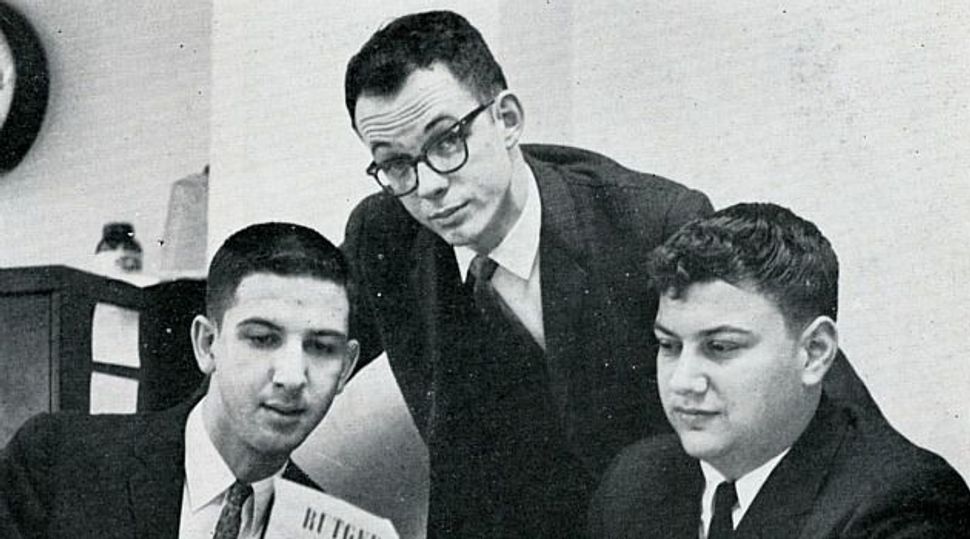 In 1962, a straight-A University of Alabama student named Melvin Meyer became a lightning rod of controversy when he published an editorial in the Crimson White, Alabama’s student newspaper, that countered the bigotry that was roiling the American south at the time.

Meyer, a Jew from Starkville, Miss., was responding to the escalating tensions in his home state following James Meredith’s attempts to enroll as the first black student at the University of Mississippi. The editorial, which urged integration at Ole Miss and elsewhere, earned Meyer the anti-Semitic ire of Ku Klux Klan sympathizers. It also placed him in the crosshairs of Klan members and segregationist leaders in the South, including Alabama Governor George Wallace. And it ultimately led him on a path to Sufi Islam.

Today, Meyer, who goes by Murshid Wali Ali Meyer, is a little-known civil rights figure. But his editorial’s argument for equality still resonates decades after the apex of the civil rights movement.

“I was never an activist,” Meyer told the Forward from his San Francisco home. “But the whole experience made me more socially conscious.”

In 1962, just eight years after the 1954 Brown v. Board of Education Supreme Court ruling, which ended legal segregation in public schools, universities across the American south were experiencing the tumult of integration. James Meredith, who would later go on to become a leader of the civil rights movement, applied to and was rejected from the University of Mississippi in 1961. The NAACP Legal Defense and Educational Fund filed suit against the university on his behalf, alleging that he was rejected because of his skin color. The case went all the way to the Supreme Court, which ruled that Meredith should be admitted. But in September 1962, Meredith was barred from entering the school.

At the University of Alabama, students, faculty and administrators watched the unfolding drama at Ole Miss and sensed that their school would be the next to integrate. (In 1956, Alabama did admit one black student under court order, Autherine Lucy, but she was later expelled for political reasons.)

The Crimson White’s student editors decided they had to respond to the events. An honors student named Robbie Roberts penned a strongly worded editorial condemning Mississippi Governor Ross Barnett for his vociferous opposition to Meredith’s enrollment. Meyer, the editor-in-chief, said he would publish it anonymously and take the heat for the criticism it was bound to generate.

The editorial, published September 27, 1962, called for Meredith to be admitted. “Morally, there is no justification for his rejection,” it declared. “Legally, there can be no doubt he is entitled to become a student at Mississippi.”

It also warned against creeping intolerance at Ole Miss and beyond: “If the bigot or the demagogue can muster a majority to turn on the Negro, will he necessarily stop there? Or will he next turn to the Catholic and the Jew, or the member of any other minority group?”

Soon after the editorial ran, the Tuscaloosa, Ala.-based United Klans of America, the largest Klan organization in the 1960s and 70s, burned a cross on the lawn of Meyer’s Jewish fraternity, Zeta Beta Tau. The house received dozens of threatening phone calls. Meyer, who was living in an off-campus apartment at the time, quickly became a social pariah at the fraternity; his ZBT brothers felt they were paying for Meyer’s actions. As Jews trying to blend in with their white, Christian peers, they resented the attention.

“I was pissed off,” said Joe “Skipper” Levin, one of Meyer’s frat brothers. “It disrupted my routine of drinking and going to football games.” He continued: “The burning cross was a wake-up call literally and figuratively. Melvin disrupted our lives without our permission. But it made me think about things I never thought about before.”

Levin credits that eye-opening experience with motivating him, a decade later, to co-found the Southern Poverty Law Center in Montgomery, Ala. The organization combats hate, intolerance and discrimination through education and litigation. Levin finds satisfaction in the fact that the SPLC shut down United Klans of America in a civil lawsuit years after it planted that burning cross on the ZBT lawn.

“It took me a while to realize it was Melvin who was right,” he said.

After the editorial was published, Meyer, a junior, and his editorial staff at the Crimson White office fielded dozens of angry letters, many of them virulently anti-Semitic. “It makes me sick to see you dirty Jews going around pretending to be American,” read one letter, which is currently housed by Mississippi State University as part of an archive of Meyer’s family albums. “Someday soon the white people of this country will cleanse themselves of scum like you.”

“I joked that [if quarterback] Joe Namath was the most popular student on campus, I was the least popular,” recalled Meyer.

There were also plenty of supportive letters from all over the country.

“I laughed it off,” recalled Meyer. “I was young and probably should have been more afraid than I was. I thought it was humorous. I liked making fun of stupidity. We ran the hate letters with a lot of (sic)s to make fun of the writers as half-literate, uneducated people.”

But the University of Alabama administration took the threats against Meyer seriously, arranging for armed guards to follow him around. Meyer didn’t trust the guards, who previously served as policemen under Birmingham’s notoriously racist Commissioner of Public Safety Eugene “Bull” Connor.

“I was never quite sure if the guards were there to spy on me or protect me,” said Meyer, who remembers feeling annoyed by their crowding presence.

The bodyguards filed daily reports with the University of Alabama vice president. They documented real danger — night rider Klansmen cruised by Meyer’s apartment on a regular basis. Even so, Meyer often tried to give his keepers the slip. One of the reports, housed in a University of Alabama special library collection, details a conversation the guards had with Meyer and his friends to dissuade them from making a Jack Kerouac-style hitchhiking trip to California over winter break. The guards thought Meyer would be endangered by the Klan as they traveled through the South.

The story of Meyer’s groundbreaking editorial and the subsequent threats to his safety was written up in the Chicago Tribune, the Colorado Daily and countless student newspapers. On November 14, 1962, The New York Times ran a United Press International story under the headline “Alabama Student Guarded After Urging Integration.”

The University of Alabama was not unequivocally supportive of Meyer. The administration asked him to retract the editorial (he wouldn’t) and debated taking away his role as editor-in-chief and even shutting down the newspaper. According to historian E. Culpepper Clark’s 1995 book “Stand in the Schoolhouse Door: Segregation’s Last Stand at the University of Alabama,” Alabama Governor George Wallace, an ardent segregationist, urged school officials to expel Meyer. (They didn’t.)

Meyer wrote in the 1963 Journal of the Student Press: “We almost lost our editorial freedom. During the weeks immediately following the editorial, I began to have a pretty good idea of what the inside of the president’s office looked like. I was called in for ‘counseling sessions’ about twice every day. In the course of these lengthy sessions I was forcefully impressed with the point of view that the university could not afford a truly free student newspaper.”

Meyer’s family also felt the blowback from his editorial. A small cross was burnt on the lawn of his childhood home while his parents were away on vacation. It caused minor damage, burning a single rose trellis. But the message was clear: Shut your son up.

Meyer’s father, Henry Meyer, was the editor and publisher of the Starkville, Miss., Daily News and also owned a printing and business supply company. (He would later become a popular journalism professor at Mississippi State University.) According to his daughter, Marjorie Goldner Meyer, the controversy led him to sell the paper, after the county stopped printing forms at his business. “The county pressured him to renounce his own son, and when he didn’t they refused to do business with him,” she said.

At the time, Meyer’s parents kept their own travails a secret from their son; they didn’t want to influence his journalistic integrity.

Meyer went on to win several journalism awards for the editorial, including the 1963 Editor of the Year award from the U.S. Student Press Association, then headed by future film critic Roger Ebert.

In 1963, the University of Alabama integrated, too. Vivian Malone and James Hood were initially blocked from entering by Governor Wallace, who symbolically stood in the door of the university auditorium. But he was overruled by U.S. Attorney General Nicholas Katzenbach, and the students were allowed in. Historians consider it a peaceful integration — there was no rioting like at Ole Miss.

Meyer believes the university’s administration did not want him there for that event. The school helped organize a plum internship for him with the Peace Corps office in Washington, D.C., and he missed the integration.

After graduation, Meyer’s life took unconventional turns. His senior year, he stopped working at the Crimson White and delved into his philosophy courses. He also started protesting the Vietnam War. Marjorie, Meyer’s sister, remembers that her family was especially proud when he received a scholarship to study philosophy at Vanderbilt University. The family thought he would end up a professor of philosophy or religion.

But the counterculture called.

“I wanted to practice spirituality, not study it,” said Meyer.

Meyer’s doctoral work focused on cosmic laughter. He completed the coursework but left Vanderbilt for the West Coast to study with a hippie Sufi leader, Murshid Samuel Lewis. He became deeply involved in Sufi Islam and today travels the country and the world teaching Sufism, dharma classes and spiritual dancing. But he still considers himself Jewish.

On the way, Meyer taught English for about a decade at an alternative school in Virginia and raised three daughters on his own after a divorce. He is now remarried and has a ten-year-old son. Meyer’s snow white, wavy hair, which he often wears in a ponytail, reaches past his shoulders. A drawl still flavors his speech. His frequent smile shows a gap between his teeth.

On a rare trip back home to Starkville soon after college, Meyer’s father asked him if he noticed any changes in the town. “I told him the big change was that Robert E. Lee Boulevard was changed to Martin Luther King Boulevard,” said Meyer. “I feel that the biggest change in attitudes in the South is due to blacks’ achievements in sports, which Southerners are passionate about.”

Meyer holds a position of mystique and inspiration on the University of Alabama campus.

The upcoming 50th anniversary of the school’s integration has caused Meyer to think about long-ago events.

Reflecting back on his experiences, Meyer said he would tell students today to look at what he did and see that it’s important to have a mind to question and challenge what passes as conventional wisdom.

“Have your own authentic voice and dare to stand for it,” Meyer said.

Dina Weinstein is a journalist based in South Florida.