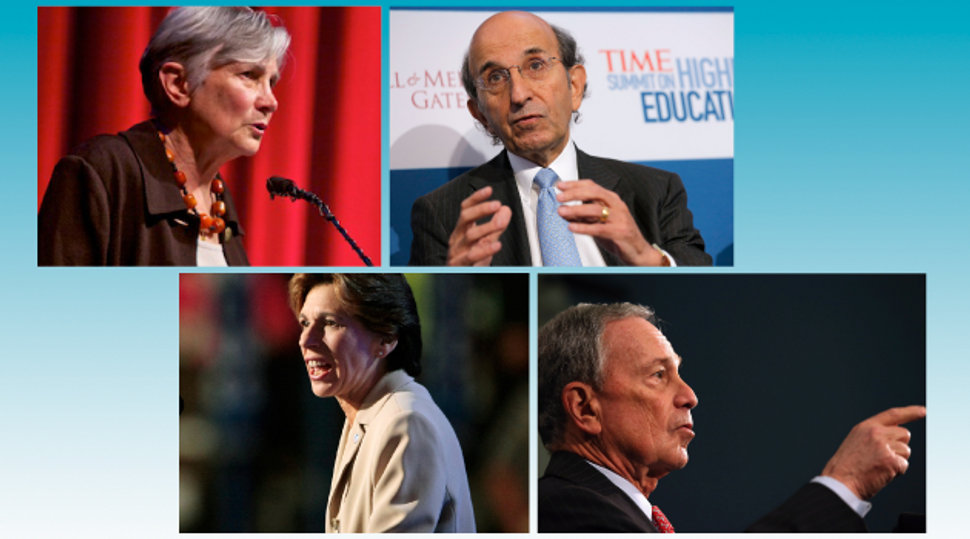 Jews dominate the debate over how to fix America’s schools. They run the teachers unions, fund the activist groups and hold some of the key political positions.

They all want to change public education. They disagree bitterly, however, on how to do so.

On one side, a coalition of wealthy donors and politicians has sought to shake up the entrenched public education bureaucracy, often targeting the teachers unions, which they say reject accountability and impose high costs through inflexible contracts.

On the other side, union officials and activists fight back against what they see as efforts to blame teachers. They argue that underfunding and broader social conditions are the real reasons for poor student performance.

A few decades ago, when public schools were filled with Jewish teachers, the Jewish position in this clash would have been obvious. The teachers unions were to all intents and purposes Jewish institutions — a largely Jewish rank-and-file headed by a Jewish leadership. The union position was the Jewish position.

Today, that’s changed. Jews do still have influence on the labor side. But Jews are also overrepresented among the politicians and businessmen who take issue with the unions’ role in the classroom.

Two Jewish teachers founded the Knowledge Is Power Program, or KIPP, the largest charter school network in the United States. Jewish billionaire Eli Broad has spent heavily through his charitable foundation on education reform efforts, as has Facebook’s Mark Zuckerberg. But they are just a few of the big Jewish names fighting over the future of American public education.

Here, by way of an orientation to the debate, the Forward offers short bios on the top four Jews with a stake in the public education war.

Randi Weingarten, the president of the 1.4 million-member American Federation of Teachers, is the most important teachers union official in the country. A New York-bred gay Jew, Weingarten bears the legacy of Al Shanker, the Lower East Side Jewish kid who first made teachers unions powerful. It was Shanker who led the most contentious and divisive strike in teachers union history when tens of thousands of teachers shut down New York City schools for a month in 1968.

Echoing some of Shanker’s legendary ferocity, Weingarten has struck back at efforts to vilify teachers unions. Weingarten argues that state education budget cuts, not teacher salaries, are to blame for school money troubles.

“There’s a perniciousness directed to teachers unions, simply because we are still the most densely organized group of people in America,” Weingarten told the Forward in 2010.

Weingarten can also be conciliatory. She’s not inherently opposed to the notion of charter schools, a cause largely championed by anti-union reformers. In fact, when she served as president of the New York City teachers union, she had the union open charter schools of its own.

“Everybody understands that our education system has to change,” Weingarten said. “But what you now have is this huge competition for dollars [and] government officials and so-called reformers who would rather point the finger at teachers and their unions because they can’t politically point the finger anywhere else.”

When New York City Mayor Michael Bloomberg compares an organization to the National Rifle Association, he’s not paying it a compliment. Bloomberg spent $10 million opposing NRA-backed candidates in the last election. So New York City’s teachers union knew to be offended when the mayor compared the organization’s internal dynamics to the NRA’s on his weekly radio show in the days after the Newtown shooting.

The tossed-off diss hints at the depths of the distaste the Jewish billionaire mayor has for the United Federation of Teachers, New York City’s teachers union.

Early in Bloomberg’s first term, the mayor centralized control of the school system in his own office, giving him massive leverage to make broad changes to the city’s schools. It was a plan that earned him a reputation as a reform-minded mayor, but it also drew him onto a crash course with the UFT.

Now, toward the end of Bloomberg’s last term, the mayor is taking aim at the UFT’s sacred cows in an apparent effort to further shore up his education reform credentials. In a recent address, Bloomberg announced plans to offer bonuses to top-performing teachers, a form of merit pay that the unions will probably oppose. He also said he would open more charter schools, which generally are non-union workplaces. And, perhaps most controversially, he vowed to find ways to fire bad teachers based on their performance, something barred by union contracts.

Bloomberg lost the first round of this fight in mid-January, when he failed to force the union to agree to accept some form of teacher evaluations in time to qualify for state aid.

If Bloomberg has more luck in overpowering the unions over the next year, he will begin his post-mayoral political career with a reputation as a mayor who took on the teachers union and won. If he fails, it’s hard to imagine a successor picking the same fight any time soon.

Teachers unions couldn’t have hoped for a better ally than Diane Ravitch, a media-savvy public intellectual who has gone from being the education reform movement’s biggest booster to its biggest critic.

Less than a decade ago, Ravitch pushed exactly the sorts of initiatives that the unions most oppose: charter schools, voucher programs and standardized test-driven teacher evaluations. Those initiatives, Ravitch now argues, have failed.

“I was known as a conservative advocate of many of these policies,” Ravitch told National Public Radio in 2010. “But I’ve looked at the evidence and I’ve concluded they’re wrong. They’ve put us on the wrong track.”

In their place, she writes, only fixing basic social problems like child poverty can bring better student performance.

A New York University professor and former official in George H.W. Bush’s Department of Education, Ravitch sees the education reform fight as an ideological war. To her allies, her experience on the other side lends her credibility that a lifelong union activist might lack. To the education reformers, she’s Benedict Arnold.

Ravitch hasn’t kept quiet about her change of heart. She speaks and writes widely. According to a recent profile, she sent 1,747 tweets during a single month in 2011.

“There is a clash of ideas occurring in education right now between those who believe that public education is not only a fundamental right but a vital public service… and those who believe that the private sector is always superior to the public sector,” Ravitch wrote in a 2011 New York Review of Books essay. The stock market crash of 2008 should suffice to remind us that the managers of the private sector do not have a monopoly on success.”

Klein, the former New York City schools chancellor under Bloomberg, has emerged since leaving government as a key advocate for education reform — and for private sector involvement in the school system.

“[The] ideological foes of business’ contribution to the public good ignore history in their attempt to protect a failed status quo,” Klein wrote in The Atlantic in August. “If their campaign to quash educational innovation succeeds, the real losers will be our kids.”

Klein has made that argument in his writing, arguing that nationalized education standards will allow corporations to invest in research towards new education technology. He’s also made it in his work. Klein now heads Rupert Murdoch’s News Corporation’s education arm, called Amplify. The company plans to sell specially designed tablet computers to elementary and high schools that Klein says will improve educational outcomes.

While calling for increasing the role of business in public education, Klein has also pushed against union power. He is a critic of union-backed measures like teacher tenure and automatic seniority-based raises. He argues for merit-based pay and, above all, more charter schools.

Like Ravitch, Klein’s biography plays an important part in his advocacy. Brought up in a Jewish family in Queens, Klein himself attended public schools.

“I got a terrific education in Astoria,” he told The New York Times Magazine in April. “Back then, my teachers never seemed to say to me, ‘Because you live in public housing, we shouldn’t expect great things from you.’ But the more people believe that education won’t make their kids’ lives better, the more we’re going to undermine the American experience.”

Josh Nathan-Kazis is a staff writer at the Forward. He can be reached on email at nathankazis@forward.com or on Twitter @joshnathankazis.