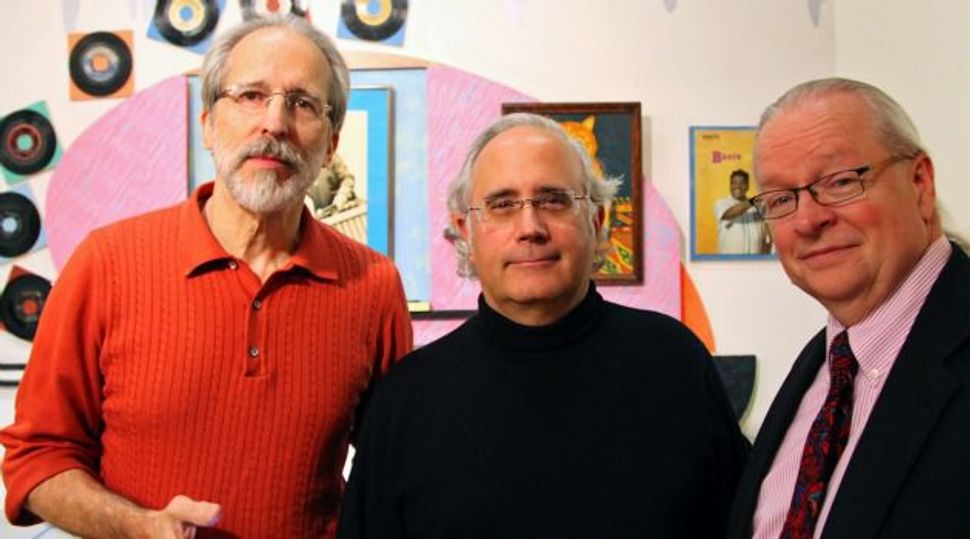 Despite the fact that he stars in and co-produces iPhone and iPad apps featuring “A Cantor’s Seder,” “High Holiday Highlights,” and blessings for the deceased, all of which are available on pocketshul.com, Cantor Emanuel Perlman remains a traditionalist.

The earnest 60-year-old Perlman, hazan at Baltimore’s conservative Chizuk Amuno Congregation, says he has little patience for wishy-washy Judaism gussied up as ecumenicalism or political correctness. But he is convinced that cantorial music and Jewish ritual will die unless they accommodate themselves to the digital era.

“That’s why the app is so important,” he asserted. “In every age, we have to adapt to the way information is transmitted. We have to go with the flow, and today that means the app. A.P.P.: I like to think of it as Appropriate Prayer Presentation. But the message is still the same. People think the message changes. The change is the way the meal has been garnished. The garnish is not the meal. That doesn’t change.”

The apps, with their Judaica-themed graphics — a Kiddush cup, a menorah — are designed for multiple audiences, not least Jews who simply don’t have access to a religious service and wish they did, such as tourists wanting to celebrate the Sabbath on a secular cruise, or a frightened patient seeking spiritual comfort in a hospital that may not have a rabbi on staff. They speak to the uninitiated as well as to the Jew who is well versed in religious tradition.

“The key is accessibility,” said Perlman, who added that he hopes his apps attract Jews who have stopped attending ­— or who have never attended — synagogue services. His ultimate goal is not to pave the way for a do-it-yourself Judaism, but to bring Jews back to synagogue. “The apps are part of a religious tool box that will give people the tools to participate in religious ritual and make them comfortable in a religious environment,” he said.**

Interactive features enhance the apps further. In the Passover app, for example, prayers are voiced in Hebrew, but with the tap of a finger, phonetic pronunciations appear on screen along with English translations. Perlman’s are by no means the only Jewish apps on the market, but they are arguably the most sophisticated: They are forged at Soundtrack Recording Studios, where clients include film directors Spike Lee, Jonathan Demme and Martin Scorsese.

The apps have no shortage of artistic pedigree, either. Perlman is a veteran singer and, like many cantors, supplements his income with high-level secular performances — from classical to jazz to pop. Every Monday for the past 15 years, Perlman has traveled to New York to take voice lessons with Bill Riley, whose roster of students has included the late Whitney Houston, Pete Seeger and Faith Hill.

I met Perlman in Riley’s studio, located in Manhattan’s Hell’s Kitchen neighborhood. The studio was overflowing with string instruments, vinyl records, photographs, memorabilia and endless miscellany on the wall-to-wall and floor-to-ceiling shelves.

“There are so many gifts here,” Perlman said. “It’s like Hanukkah every Monday. I feel most alive on Monday.”

Without the benefit of a warm-up, and accompanied only by pianist Eric Sedgwick, Perlman, a tenor, launched into a Neapolitan song, followed by Bob Dylan’s “Make You Feel My Love,” Bette Midler’s “In This Life” and a cantorial piece for which he donned his yarmulke.

Throughout, the moon-faced Riley, his silver hair tied back in a long ponytail, listened thoughtfully, interrupting only upon occasion. Afterward, Riley, who is part Native American and is not Jewish, praised Perlman for his efforts to keep Jewish liturgy and tradition alive.

“I respect all peace-loving peoples and religions,” Perlman said of Riley. “We have one God, but we get to God through different doors. Mine has a mezuza.”

Riley has nurtured Perlman’s project from the start, and in fact played matchmaker, introducing Perlman to John Kiehl, co-founder of Soundtrack Recording Studios. Kiehl says he has an emotional bond to Jewish liturgical music even though he is Christian.

“It’s a predecessor to all other musical traditions,” said Kiehl, who is a graduate of the Massachusetts Institute of Technology and a technology maven. He says he is especially drawn to the challenge of forging digital gadgetry with interactive features. The three men have been collaborating for more than a year.

When I remarked that their coming together was a lucky coincidence, Perlman balked at my choice of words. “A coincidence is God’s intervention without the publicity,” he said. “We try to prove the existence of God through coincidence.”

So far, Perlman and his partners have not made any money from their collaboration. Nonetheless, they are planning five more apps and continue to celebrate their journey and personal bond, which Perlman likens to a religious experience. Might all this sound a bit more like something out of a Mel Brooks sketch than a sustainable business model?

“I love Mel Brooks, but I’m not answering this,” Perlman said. “I’m in denial.”