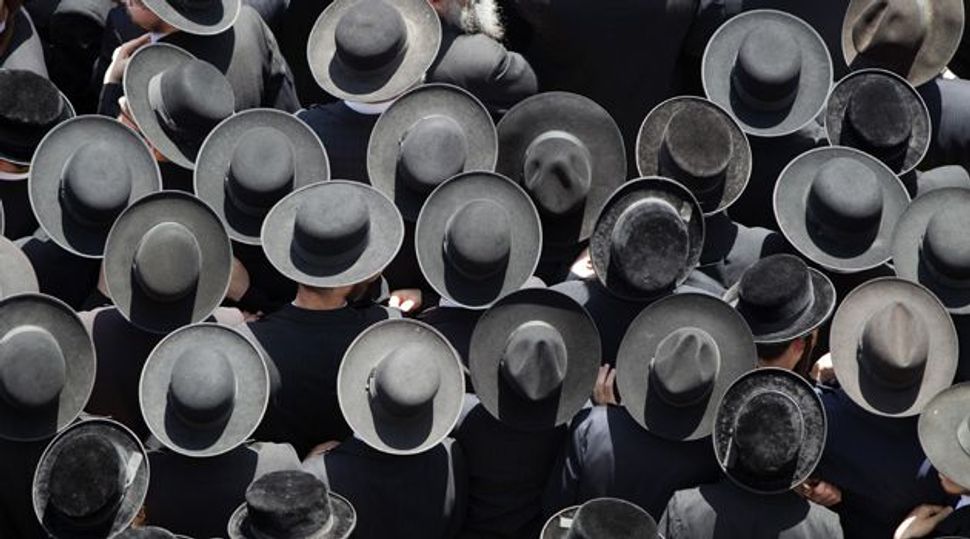 All Adverbs Aren?t Created Equal: Would you describe these men as fervently Orthodox, ultra-Orthodox, or would you use an entirely different word? Image by Getty Images

For old-time readers of this newspaper, Seth Lipsky needs no introduction: Lipsky was the English Forward’s founder and first publisher back in 1990, and continued to direct it for most of the decade. His voice continues to be heard on the politically conservative side of the ledger, and in a January 20 column in the New York Post, he spoke out on the issue of abortion. Commenting on the high rate of it in New York City, he wrote:

“This was brought into sharp relief two years ago in a press conference by some of the city’s leading clergymen. It featured a rare joint appearance by the archbishop of New York, Timothy Cardinal Dolan, and the leader of the largest grassroots organization of fervently religious Jews, Rabbi David Zwiebel of the Agudath Israel of America.”

This isn’t going to be a column about abortion. It’s about the phrase “fervently religious Jews,” which — more often in the form of “fervently Orthodox Jews” — has been promoted in recent years as an alternative to “ultra-Orthodox” and “Haredi.” The fact that someone like Lipsky, who is far from religious Orthodoxy himself, has chosen to use it shows that its promotion has met with considerable success.

It’s certainly possible to understand the motives behind this. In an op-ed published in the Forward several years ago under the title “Stop Calling Me an Ultra-Orthodox Jew,” a Haredi named Abbott Katz complained that “ultra,” with its “Latinate tinge,” is “redolent of cultic cadres pushing their faith to mysterious extremes.”

What makes “ultra” so pernicious, Katz wrote, is “its very status as a prefix, a descriptive tack-on to a more primeval, integral Judaism of truer provenance. Orthodox Jews seem to be seen as marking the spiritual baseline, while the ‘ultras’ are typed as a kind of fanatic insurgency.” And he ended with an appeal: “Can’t the stylebook writers think of something else?”

Well, they have. The Jewish Telegraphic Agency substituted “fervently Orthodox” for “ultra-Orthodox” as far back as the 1990s, and today one sees it everywhere. “In last week’s column I pondered the yawning gap between the haredim or fervently Orthodox Jews and the rest of us,” Andrew Silow-Carroll wrote in an editorial last year in the New Jersey Jewish News. “Chabad’s Model of Outreach Gains Favor Among Fervently Orthodox,” ran a recent headline in a Jewish Federations of North America newsletter. “In liberal New York City, fervently Orthodox Jews may soon be getting [an electoral] district to call their own,” the Jewish World News proclaims. One encounters the phrase more and more — and it is increasingly being used by non-Haredi writers.

Count me out. “Fervently Orthodox” strikes me as far worse than “ultra-Orthodox.” “Ultra-Orthodox” may sound pejorative to some people, but I very much doubt that it was coined with such an intention in mind. (Although I haven’t succeeded in tracing the term’s origins, it first came into use in English, I believe, in the 1950s, after Haredi survivors of the Holocaust began arriving in America — where, until then, their form of Judaism had not been significantly represented.)

It’s true that in words like “ultra-ambitious” or “ultra-confident,” “ultra” has the negative sense of “overly,” but this isn’t the case with all “ultra” words. Think, for example, of “ultramodern” or “ultralight”; there, if anything, the prefix suggests a measure of improvement on something less perfect. My own sense of the term “ultra-Orthodox” in American Jewish discourse is that, on the whole, it has been used neutrally, with no overtone of either denigration or praise.

“Fervently Orthodox,” on the other hand, is not neutral. There are Jews, it implies, who are “merely” Orthodox, and there are others who are “fervently” so — and who would question that it is better to be fervent than mere? If one thinks of typical ways in which the word “fervent” is used — “She’s a fervent marathon runner”; “He’s a fervent art connoisseur”; “The French are fervent about truffles”; etc. — the connotation is almost always positive. Not only does the word carry no hint of excess, it also signifies an enthusiastic dedication to a deserving cause or activity.

What distinguishes ultra-Orthodoxy from “mere” Orthodoxy, after all, is not necessarily its fervor, which varies from one individual to another, but its style of life, its scale of values and the rigor with which it practices certain ritual commandments.

We live in an age in which it is frowned upon to call groups by names they don’t like, and this is not in itself a bad habit. This doesn’t mean, though, that we have to call them by names that flatter them just because they do like them. If “ultra-Orthodox” is going to be a no-no, let’s not make “fervently Orthodox” a yes-yes. That leaves us stuck with the Hebrew “Haredi.” It’s a word that Jews can’t even agree how to pronounce, but at least no one gets upset by it.