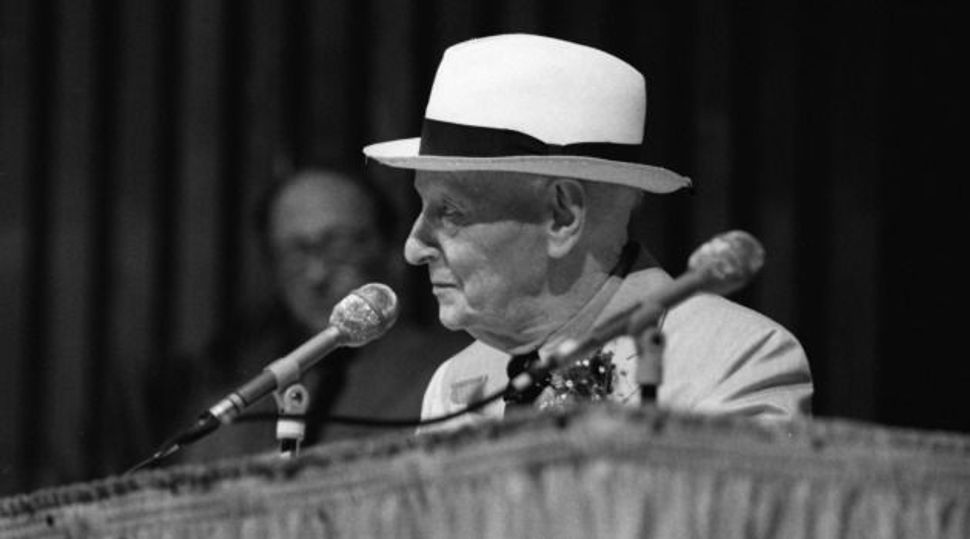 For Further Reference: Users of the new Yiddish-English dictionary can delve into untranslated works by I.B. Singer, seen above at the 1981 Miami Book Fair. Image by Wikimedia Commons

The binding of my copy of Uriel Weinreich’s “Modern English-Yiddish Yiddish-English Dictionary” broke sometime between my third and fourth semesters studying the language. The beginning Yiddish student can get by with only the glossary in the back of Weinreich’s “College Yiddish,” or with Sheva Zucker’s “Yiddish: An Introduction to the Language, Literature, and Culture,” but it’s impossible to move into real Yiddish texts — or even to read the publications designed for students, like the Forverts’s “Vayter (Forward)” or the Medem Library’s “Der Yidisher Tam-Tam (The Yiddish Tam-Tam)” — without a good dictionary.

Weinreich has been the gateway dictionary for the past 45 years, the first any Yiddish student buys, Weinreich is an (intentionally) limited dictionary, and users soon need a more inclusive one, like the new “Comprehensive Yiddish-English Dictionary,” edited by Solon Beinfeld and Harry Bochner, a translation of sorts of Yitskhok Niborski and Bernard Vaisbrot’s Dictionnaire Yiddish-Français (2002). I was already making use of Alexander Harkavy’s much more extensive, “Yiddish-Hebrew-English Dictionary” (1928) by the time the Weinreich’s pages started falling out, and Harkavy was my go-to dictionary by the time the Weinreich’s spine split.

The book almost perfectly divided itself into two separate Yiddish-English, English-Yiddish dictionaries. Somehow I got the idea that it was better to repair my copy than to buy a new one. I bought binder’s glue, book boards and special tools for evenly spreading the paste. That night I poorly measured, miscut and rebound my Weinreich as a hardcover. A year later, the new glue stopped holding. It’s still the only copy I own.

It hasn’t been that long since I started learning Yiddish, but it’s doubtful that new students will have the same connection with Weinreich’s dictionary that I had. This isn’t an article about technology: There’s no question that digitized dictionaries have changed the study of Yiddish, that dictionaries designed for the Internet can provide fuller definitions from Yiddish literature, and that alternate technologies, like the ability, as seen on the Forverts’s website, to get a translation by highlighting a word on a Web page, will eliminate some need for traditional dictionaries.

The connection to Weinreich’s dictionary will change because the “Comprehensive Yiddish-English Dictionary” is a masterpiece, an essential resource for anyone who wants to know more about Yiddish. [Editors note: The Forward Association made a substantial grant to support the work on the Dictionary.]

In a sense, Beinfeld and Bochner’s dictionary fulfills the promise of Weinreich’s dictionary, which he finished in 1967. It emerged out of an earlier attempt to write a smaller dictionary for students in Yiddish elementary and high schools. Work started on that project in 1948, but a draft was never published.

The dates quietly tell a larger story about American Judaism: The State of Israel was established in 1948, and American Jews’ relationship to Hebrew and Yiddish changed. There were still Yiddish day schools in 1967, but by then it was clear that the future of Yiddish education was in colleges, universities and, separately, in informal groups that gathered to speak to each other or read together. The future of secular Yiddish in America was Yiddish studies: an object of scholarship, and a labor of love, but not a living focus of the American Jewish community.

Perhaps for this reason, Weinreich decided to make his dictionary normative. The dictionary would teach students correct Yiddish. Common Yiddish words, like tsukunft (future), were marked with a black dot, indicating questionable admissibility in Standard Yiddish. The adjective tsukunftik (future, forthcoming), on the other hand, was marked with a dreaded black triangle, meaning that it was inadmissible. Thousands of words were excluded from the dictionary as too Germanic (or daytshmerish), and thousands of others were excluded for space.

These decisions make sense from one perspective of language teaching: Students who want to learn how to write and speak Yiddish need to learn the “correct,” standardized forms. But Yiddish literature wasn’t written in Standard Yiddish; it was written by native speakers using the words and speech patterns of the people they lived with — or, more accurately, by artists who wanted to give the impression of pure, undiluted folk speech. At times, Germanizing was considered high style, more refined and educated, while other writers preferred to play with the meanings and sounds of the Hebraic component of Yiddish. Weinreich’s “modern” dictionary doesn’t help readers fully understand the texts of these other eras, nor the more advanced works of modern Yiddish literature. Avrom Sutzkever, the greatest Yiddish poet of the post-1945 era, began his poem, “Der Shney Afn Khermon” (“The Snows of Mount Hermon”), with the rabbinic-derived expression may ko mashme lan, “what is the significance of.” There’s no entry for may ko mashme lan in Weinreich: The poem is unknowable to users without a talmudic background.

The user of the “Comprehensive Yiddish-English Dictionary” will have none of these problems. Not only does this dictionary include the thousands of Yiddish words that Weinreich omitted, it also contains extensive translations of Yiddish idioms. For example, the entry for tam (taste), already well developed in Weinreich’s dictionary, here contains subentries for nit hobn keyn tam, lack charm/have little appeal, and for lign (dative object) in tam, stick in someone’s mind, while clarifying that the expression on a tam can mean both “tasteless” and “pointless.” Few texts are now insurmountable.

The real promise of a dictionary is the promise of independence. Learning a language means having a set of predigested opinions and beliefs thrown at you. “Avrom Sutzkever is the greatest Yiddish poet of the post-1945 era,” you’re told. “Mendele Mocher-Sforim, Sholem Aleichem and I.L. Peretz are the three classic writers of Yiddish,” you note, enshrining an argument partly developed by Sholem Aleichem, about what Yiddish literature should look like, as fact.

A great dictionary means that people with a little knowledge of the language can read more broadly. They can explore the mystical poetry that Aaron Zeitlin wrote after the Holocaust and decide how it compares with Sutzkever’s. They can read stories that Isaac Bashevis Singer never wanted translated, or they can read stories that have translations and compare Singer’s Yiddish originals with the English “Second Originals” to see how he modified his writing. A great dictionary makes it possible to form your own opinions and develop your own taste. It’s no accident that one of the associate editors of the project, Barry Goldstein, recently translated J.R.R. Tolkien’s “The Hobbit” into Yiddish: Both projects are fundamentally about finding your own way in the language, about making it reflect your interests.

No dictionary has ever opened up Yiddish as spectacularly for the English-speaking audience as Beinfeld and Bochner’s “Comprehensive Yiddish-English Dictionary.” Weinreich’s is still the best English-Yiddish dictionary — for now — and it may always be a part of Yiddish-language education in America. But Beinfeld and Bochner, and before them Niborski and Vaisbrot, have compiled something truly special, books that satisfy the needs of advanced students, beginners, indeed anyone who can read the alphabet. The “Comprehensive Yiddish-English Dictionary” is a book you can fall in love with.

Eitan Kensky is the preceptor in Yiddish at Harvard University.