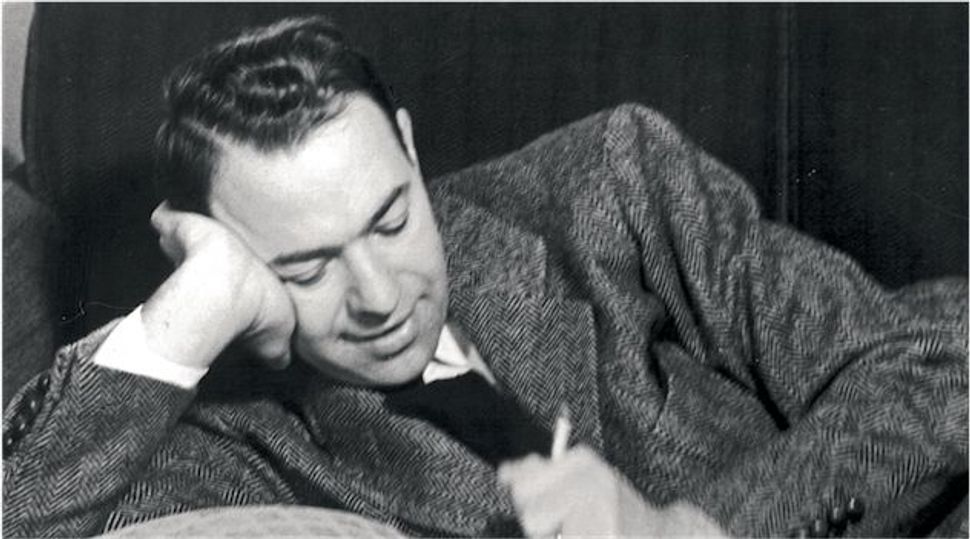 Lyrically Reclined: Harburg penned ?Somewhere Over The Rainbow,? made famous by Judy Garland. Image by Courtesy of Wesleyan University Press

The tragic “Brother, Can You Spare a Dime?” the idealistic “Somewhere Over the Rainbow” and the raucous “Lydia, the Tattooed Lady” were all co-written by the same American Jewish lyricist, E. Y. Harburg (1896–1981), and all owe a debt to Harburg’s Yiddishkeit.

In “Yip Harburg: Legendary Lyricist and Human Rights Activist,” historian Harriet Hyman Alonso relates the story of Isidore Hochberg, who was born in New York, of Russian-Jewish origin, and acquired the nickname “Yip” in his youth. The origins of the nickname remain mysterious despite the fact that Harburg once claimed to interviewer Studs Terkel that he was called “Yip” because he was as hyper-energetic as a squirrel and “yipsl was the [Yiddish] term for a squirrel” (it isn’t).

Throughout his life, Harburg maintained a steadfast allegiance to social concerns: “I had a predisposition to feeling for the underdog. I grew up in the slums,” he once said. “I know what it is to have your father come home from the sweatshop after working 12 hours a day.” He also knew Yiddish theater, especially the chest-beating and “Jovian outrage of guilt,” as Harburg later recalled it, of tragedian Boris Thomashefsky. Harburg also relished great Jewish vaudevillians of his boyhood, including Fanny Brice, Willie Howard and Ed Wynn. Isidore Gershvin, a classmate in high school and in City College, later to become famous as Ira Gershwin, introduced him to Gilbert & Sullivan recordings. W. S. Gilbert’s lyrics made a lasting impression.

Fired from a boring office job after the Wall Street Crash of 1929, Harburg started penning lyrics and was introduced by Gershwin to a Russian-born Jewish composer named Jay Gorney. Harburg and Gorney produced the 1932 hit “Brother, Can You Spare a Dime?” for a Broadway revue, “Americana.” Gorney would later describe the melody, as Alonso notes, as inspired from a “Jewish lullaby that his mother had sung to him.” The song’s direct plea from a schnorrer for rakhmones (pity) and Job-like plaints (“Why should I be standing in line, just waiting for bread?”) seem to echo Yiddish theater style. The Yiddish song “Papirosn” (“Cigarettes”), a setting of a Bulgarian folk tune to words by Herman Yablokoff, features a grieving young beggar boy recounting his tale of woe to passersby.

“Papirosn” is an amped-up, more intensely visceral precedent for “Brother, Can You Spare a Dime?” which is more restrained in order to appeal to a non-Jewish public. Even so, the grandiose self-imagery in “Brother” (“Once I built a railroad, / Made it run…”) is not far from Thomashefsky’s breast-beating declarations. “Brother” was immediately embraced by such singers as Bing Crosby and the Ivy League crooner Rudy Vallee, and is performed even today, by multimillionaire popstars who lack a sense of irony, such as George Michael. Harburg parodied his own lyrics for political purposes in 1974, when he published a Watergate commentary in The New York Times:

“Once we had a Roosevelt,/ Praise the Lord, / Life had meaning and hope./ Now we’re stuck with Nixon, / Agnew – Ford, / Brother, can you spare a rope?”

Escape from the Depression was another theme of Harburg’s 1930s work, as in the score for “The Wizard of Oz,” written with Harold Arlen, who was born Hyman Arluck, son of a Buffalo, N.Y., synagogue cantor. “Somewhere Over the Rainbow,” originally intended to express the desire of teenage Dorothy Gale (Judy Garland) to flee Kansas, later was seen as expressing more general longing for transcendence. Its deliberately naive terminology was especially apposite in the Hawaiian singer Israel Kamakawiwo’ole’s folklore-tinged recording and in gospel-flavored performances by Aretha Franklin and Patti LaBelle.

Arlen’s soulful lyricism was summed up by Harburg as “Semitic plus Congo.” During a 1973 speech at the Mark Taper Forum, in Los Angeles, Harburg explained that the song survived a struggle between Victor Fleming, the “Anglo-Saxon” film director who wanted it cut, and the intimidated producer Mervyn LeRoy, who “suddenly regressed to little Mervyn Levine again and the song was out.” Arlen reacted by running “to shul,” but the argument was settled when studio head Louis B. Mayer decreed: “Aw, well, let the boys have the damn song. Put it back in the picture. It can’t hurt.”

Harburg’s posterity was likewise not hurt by his 1939 song with Arlen, “Lydia, the Tattooed Lady” in the Marx Brothers film “At the Circus.” A definitive extended leer in song for Groucho, “Lydia” contains imaginative couplets such as “When her muscles start relaxin’ / Up the hill comes Andrew Jackson.”

Harburg’s 1944 “Free and Equal Blues,” written with Earl Robinson, who also composed the famous workers anthem “Joe Hill,” was another lasting achievement. The song scorned U. S. Army segregationist policies, which during World War II even separated “white” and “colored” blood supplies for transfusion. Harburg’s lyric quotes a doctor: “A molecule is a molecule, son, / And the damn thing has no race.” Harburg’s expressions of activism also included “Bloomer Girl,” a 1944 feminist Broadway musical with Arlen, blending the themes of the 19th-century women’s rights and anti-slavery movements in America. As Harburg told a New York audience in 1971, battling for civil rights came naturally to him:

“The Jews have known this for a long time. The Jews were more aware of it than any other tribe in the world because they were the first ones to suffer fascism under Pharaoh…. The first freedom rider was Moses who came along and the whole Passover Seder and ceremony is devoted entirely to freedom, to a fight for freedom, to how you get out of slavery, so that the Jews being a minority have always known that if there’s any other minority being enslaved anywhere in the world that it’s their fight.”