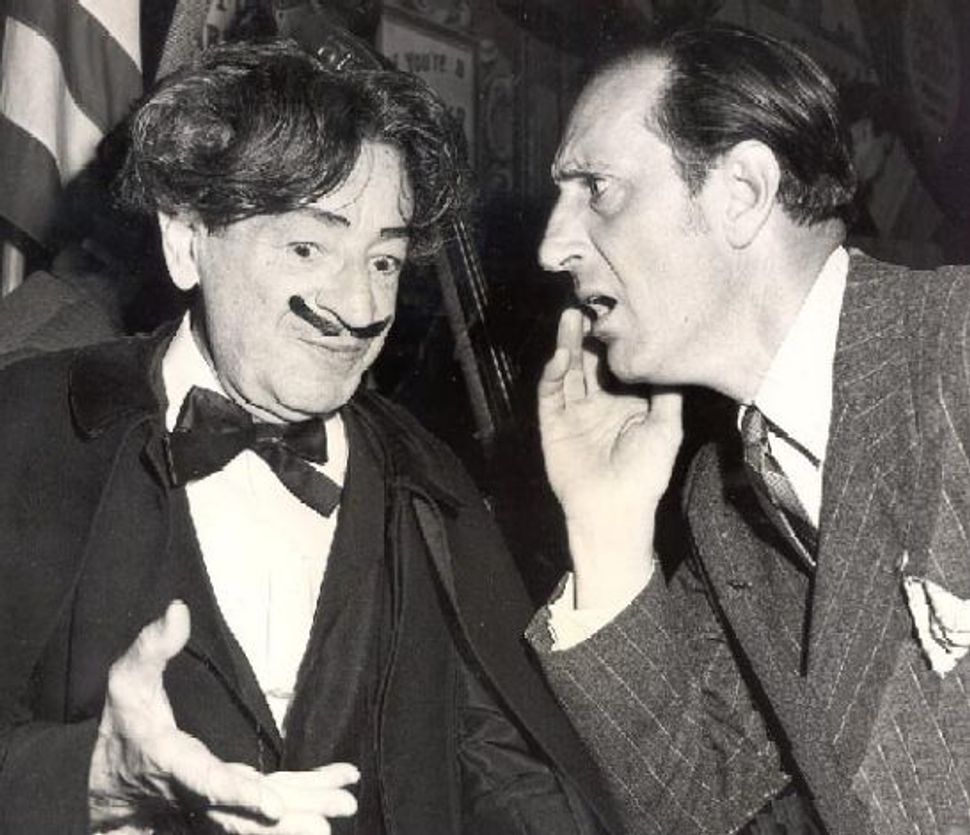 Image by Courtesy of basilrathbone.net

In his 1996 “Rewrites: a Memoir” Simon describes how in the late 1940s as an aspiring gag-writer, he tried to sell jokes to vaudevillian Willie Howard, a “pint-sized man with a huge head of hair” whose home at Broadway’s Astor Hotel was a “drab room with bath.” Howard wore a “faded bathrobe over pajama tops, blue pants with suspenders, argyle socks and slippers,” much like Willie Clark in “The Sunshine Boys.”

The vaudeville routines revived in “The Sunshine Boys” are mediocre, unlike Howard’s. Born Wilhelm Levkowitz, the son of a cantor in Neustadt, Silesia, Willie (1883–1949) and his brother Eugene (born Isidore, 1880-1965) were singing onstage in New York by 1897. Their act pleased astute insiders such as comedian Fred Allen, who recalled in his memoir “Much Ado About Me”: “Willie Howard was a great artist. He was a fine comedian, an accomplished dramatic actor, an excellent singer, and a versatile mimic.” Allen added that Willie “wasted most of his professional life impersonating actors who didn’t have a fraction” of his talent.

In a 1978 interview, Marlon Brando concurred: “Oh, God, [Howard] was so funny! What a funny man. The faces he made.” The title of Herb Gardner’s 1985 play and 1996 film “I’m Not Rappaport!” is a Howard catchphrase. Howard’s comic specialty was Yiddish-flavored jokes; in one film, posing as a French teacher, he offers the helpful information that Pferdefleisch (horsemeat) is translated on French menus as “filet mignon,” and bread pudding is “made from stale bagel — it’s no good, it tastes terrible, but eat it anyway; it goes with the dinner.” In a 1926 film spoofing opera with Eugene as straight man, Willie calls the German — and voluminously Aryan — contralto Ernestine Schumann-Heink “Schumann-Kike. She’s certainly got a great voice. I’ll tell the community!” He adds, “Let’s imitate those two Irish opera singers, John McCormack and Al McGluck,” the latter a reference to the Romanian Jewish star soprano Alma Gluck, born Reba Feinsohn. Howard’s talents deserve a place in the sun, not just Simon’s ironic sunshine.

See Willie Howard with his brother Eugene as straight man in a 1926 comedy short which includes an operatic parody, here.