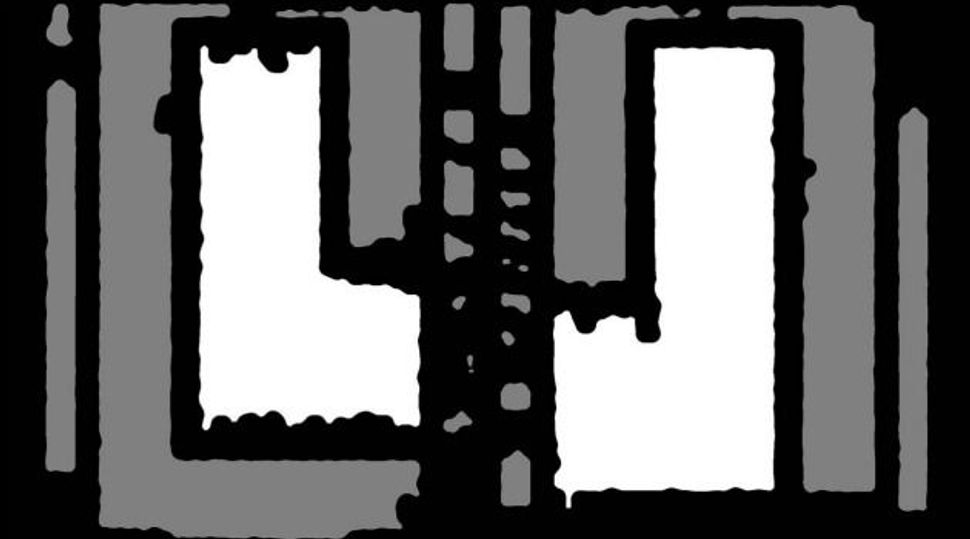 A Very Rubinesque Approach: At the JTS exhibit, artist Ben Rubin has abstracted the patterns of each page of the more than 5,000 pages of the Babylonian Talmud into geometric shapes that constantly morph and change on a screen. Image by Courtesy of JTS

It used to be thought that the Second Commandment’s prohibition on making images meant there could not be a Jewish visual art. In his 1966 essay “Is There a Jewish Art?” art critic Harold Rosenberg grappled with the very question posed by his title. He didn’t think there was, because he didn’t think there was a single Jewish style. Yet he found, as Margaret Olin writes in “The Nation Without Art,” an “Old Testament provenance” for a Jewish found art, writing in his essay that “the idea that if you inhabit a sacred world you find art rather than make it is clearly present in the Old Testament.” Forty-five years later, the new exhibit at the Jewish Theological Seminary, “Reading the Visual / Visualizing the Text,” the inaugural exhibition of the JTS Arts Advisory Board, shows the tremendous creative potential in a Jewish art that finds art rather than makes it.

In “Reading the Visual/Visualizing the Text,” five featured artists have been given the opportunity to do just what Rosenberg described: to find art within the sacred worlds of both Jewish tradition and throughout the JTS building itself. For the exhibit, each artist paired his or her own pre-existing or newly created work with something from within JTS’s treasure trove of manuscripts and photo archives.

When you enter the JTS building, you see on a screen suspended from the ceiling the video installation “Between the Lines,” by media artist Ben Rubin, whose LED light sculpture “Beacon” (2010) permanently illuminates the National Museum of American Jewish History in Philadelphia.

For JTS, Rubin has abstracted the patterns of each page of the more than 5,000 pages of the Babylonian Talmud into geometric shapes that constantly morph and change on a screen.

To see these constantly moving patterns fluidly and endlessly changing shape and color but adhering to the Talmudic form of a central text with discussion flowing around it evokes in a striking visual way the dynamic debate and discussion that is at the heart of the Talmud.

Rubin’s inability to read Hebrew allowed him to get at the essence of the Talmud through this visual language. The artist’s approach reminds me of Margaret Olin’s analysis of Martin Buber’s retelling of a Hasidic tale in which a boy is supposed to be supposed to be studying texts, but gets distracted. The boy glances away from the letters, which are depicted in visual terms, allowing him to see the landscape as if it were a painting. Rubin’s work, like this tale, show “two modes of visual perception,” the intertwining of reading and looking.

Artist Danielle Durchslag took her inspiration from photos she found in the JTS photo archive. In her series, “Relative Unknowns,” Durchslag takes hundreds of tiny pieces of paper, folding, crumpling, collaging and layering them to re-create photographs of “relative unknowns” in her own family.

Here she has interwoven her photo reconstructions on the wall with reprinted photos of unidentified figures she selected from the JTS photo archive. Those she has mounted on vintage board and treated to make them look like old photos.

Connecting her own family history with JTS’s history personalizes JTS history for all visitors; the relative unknowns appear as if they could belong to any family. Durchslag’s installation also effectively brings women out of the archives and into the spotlight.

Like Durchslag, artist Rachel Kanter also draws on her own family history. She also feminizes the JTS building, populating the Women’s League Seminary Synagogue, JTS’s sanctuary, with her brightly colored quilted and embroidered prayer shawls. The shawls are based upon vintage apron patterns, and Kanter drapes them onto mannequins that stand in clusters of threes and twos, giving the appearance of a minyan of women waiting in the sanctuary. What look like tzitzit hang from the aprons — a juxtaposition that, as Kanter explains, pushes viewers to question what a ritual garment is and whether a woman’s is different from a man’s.

Many of these pieces are connected to Kanter’s family history; one tallit is made from her father’s own. Kanter pairs these tallitot with a 1909 greeting card, found in the JTS library, which depicts a family of recent immigrants to the United States. The mother in the image, dressed in dark, drab clothes, is welcomed by a tall, regal woman in a bright stars-and-stripes dress in a style similar to the brightly quilted fabrics of Kanter’s tallitot. The pairing reflects Kanter’s larger project of exploring the role of American women in Judaism and in domestic life, and also evokes her family’s own immigration to America in 1900.

In the JTS library, Artist Tobi Kahn displays the abstract paintings he created in response to images in illuminated manuscripts of siddurim and Haggadot from the JTS Rare Book Room collections. Kahn found images that existed as mere visual decoration and gave them new life by making them the subject of his paintings, just as in “Card Catalog” (2010) he took an otherwise obsolete card catalog and repurposed it as a work of art in the JTS library. In both installations Kahn has taken items that might be forgotten or ignored and preserved their beauty by capturing, distilling and honoring their essence.

Jill Nathanson created a series of paintings, “Seeing Sinai: Meditations on Exodus 33-3” (2005) as the product of a close reading of Exodus 33 and 34 in collaboration with Arnold Eisen before he was Chancellor at JTS. Together, Nathanson and Eisen studied the role of vision in the revelation of the Torah at Sinai. Eisen’s edited commentary is included here alongside the paintings, which are warm, luminous and glowing as if with God’s “threads of light.” Moses’ insistent questioning of God in the commentary reflects Nathanson’s and Eisen’s own questioning — and indeed the entire exhibit’s questioning of texts and tradition.

This thought-provoking exhibit shows an impressive commitment by JTS to examining Jewish tradition, texts and its own past, and to opening up discussion through the lens of a visual language.

Laura Hodes is a lawyer and writer living in Chicago. She writes frequently about art for the Forward.