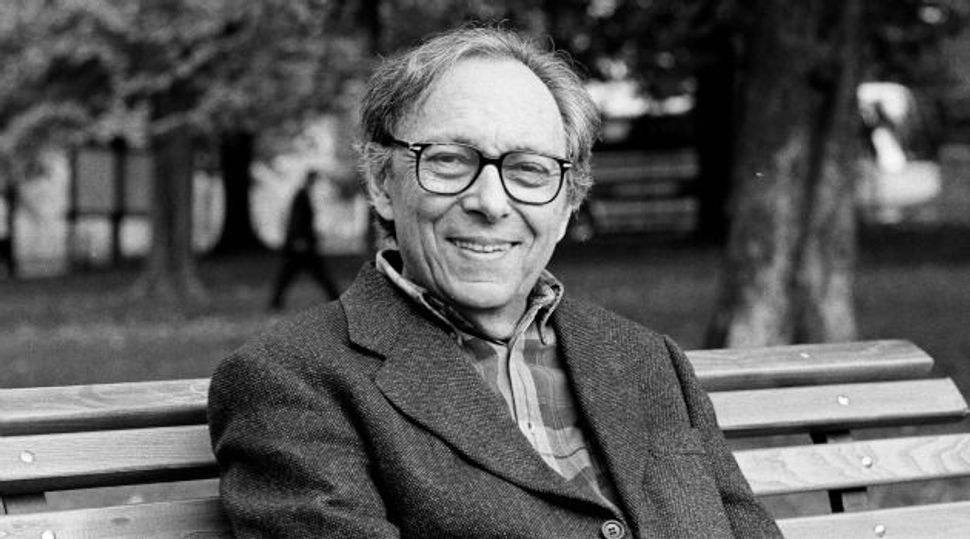 Prince of All Readers: The author, literary theorist and historian has recently published ?The Ink of Melancholy? and two other books. Image by Courtesy of Editions Zoe

Jean Starobinski, the 92-year-old Swiss literary theorist and Jewish historian of ideas, is still a productive bundle of energy. With three compelling new books out recently, “The Ink of Melancholy,” “Accusing and Seducing: Essays on Jean-Jacques Rousseau,” and “Diderot: a Fiendish Babble,” the man whom poet Michael Butor called a “prince of reading” is not sitting on his laurels. Indeed, he is already working on new projects, while also reflecting about how his Polish Jewish roots may have influenced his life achievements.

Known to English readers for his previous books, which have been eloquently translated by Arthur Goldhammer, on Jean-Jacques Rousseau, Montaigne and the art of opera, Starobinski was born in Geneva in 1920, the son of Aron Starobinski of Warsaw and Sulka Frydman of Lublin.

Both his parents left Poland in 1913, fleeing the anti-Semitism which had prevented them from fulfilling their dream of becoming doctors. Aron Starobinski chose to study humanities as well as medicine, and his son Jean, who received his Swiss citizenship only in 1948, would follow his example, eventually becoming a practicing psychiatrist. Yet even in Switzerland, the Starobinski family could not escape reminders of a legacy of Europe-wide oppression. In November 1932, when Starobinski was 11 years old, in his family’s Geneva neighborhood of Plainpalais, murderous violence broke out against the Swiss Jewish socialist Jacques Dicker, who was leading an anti-fascist demonstration. The Swiss army fired upon the protesters, killing 13 and wounding 65.

Taking refuge in his studies, Starobinski also delighted in music, singing in a choir, playing piano and kettledrum and admiring performances by such Jewish conductors as Bruno Walter and Paul Kletzki. The blithe music did more than influence his highly rhythmic prose in later years; it also provided a spiritual antidote during the grim years of fascist oppression, as Starobinski explains in “The Ink of Melancholy.”

The book’s title, inspired by a line from the 15th-century poet Charles of Orléans, alludes to the etymological meaning of melancholia, which comes from the Greek for “black bile.” As Europe embraced the black bile of fascism, Starobinski became fascinated by writers who denounced totalitarian beliefs which defaced the truth in a way that was “both masked and masking.” Since he was not granted Swiss citizenship until 1948, he was not conscripted into the army and thus felt doubly isolated, as he told an interviewer in 1989, as an “inhabitant of a neutral country and a foreigner in that country.” In his earliest articles, published between 1942 and 1944 and later collected by Les éditions Zoé, Starobinski was boldly outspoken. He praised French Resistance poets, noting that these authors “affirm what remains indomitable, what brutal violence will never get the better of, even if it believes that it is triumphing.”

This unambiguous reference to Nazi Europe suggests Starobinski was aware that as a student of melancholy, he was following in the path of a trio of remarkable German Jewish historians, Erwin Panofsky, Fritz Saxl and Raymond Klibansky, who collaborated on the landmark study, “Saturn and Melancholy: Studies in the History of Natural Philosophy, Religion, and Art.” Starobinski was also greatly influenced by the Russian Jewish philosopher of science Alexandre Koyré.

Like these scholars, and the subjects of his study, from the myth of the Wandering Jew to modern authors such as Walter Benjamin and Franz Kafka, Starobinski exemplified creative survival by combining melancholy—a time-honored sign of inspiration—with vivacity.

Some other books on melancholy in literature might just be depressing, but Starobinski’s prose is marked by good-humored, Mozartian elegance. The charms in his work are also reflected by the man himself. So zesty is Starobinski, known to his intimates as “Staro,” that acquaintances might even be surprised to find that he elected melancholy as a subject for professional expertise. I well recall meeting Starobinski in Geneva just over 20 years ago, when he was an astonishing, vivacious septuagenarian. I mentioned a thrice-obscure rare book which I had read at Paris’s Bibliothèque nationale, about an 18th-century blind traveling musician, and Starobinski discussed it as if it had been his bedtime reading the night before.

Until 1958, Starobinski humbly and diligently combined medical practice with literary investigations. Then he finally retired from medicine, after a stint as a visitor from 1953 to 1956 at Baltimore’s Johns Hopkins University, where he was impressed by the German Jewish neuropsychologist Kurt Goldstein (1878-1965) as well as the Austrian Jewish stylistic critic Leo Spitzer.

Through contact with such individuals, Starobinski honed his own skills through his gift of intense empathy, whether for people, patients or literary figures. “Rousseau is my most famous patient,” he once declared. In “The Ink of Melancholy,” Kafka, whose stories, including “In the Penal Colony,” Starobinski translated and prefaced in 1945, is described as frozen in melancholy, as opposed to Walter Benjamin, who wandered city streets endlessly in an obsessive expression of his own melancholia. Both writers evolved a Jewish response to contemporary history which might be summed up as the joy of being sad. As Starobinski notes, the “contemplative immobility” of a writer fixed in somber thoughts which prevent movement, is another side of the “two aspects of melancholic experience: endless wandering and the confinement which interrupts all active engagement with the outside world.”

This engagement has been a constant ideal of Starobinski’s, as he noted in a 1957 article: “Were it not for my good fortune in being born in Geneva, I would have died at age 22 in a crematorium furnace. On occasion I have committed the impropriety of reminding people who would have sent me there about this, people who today have become as gentle as lambs, eccentrics, pretending that now they are ones who are targets of persecution.” In 1946, when Starobinski spoke at a Geneva conference of intellectuals including Hungary’s Georg Lukács and France’s Raymond Aron, the French Jewish historian Pierre Nora wrote that Starobinski was the only speaker present at the conference “who mentioned the extermination of the Jews.”