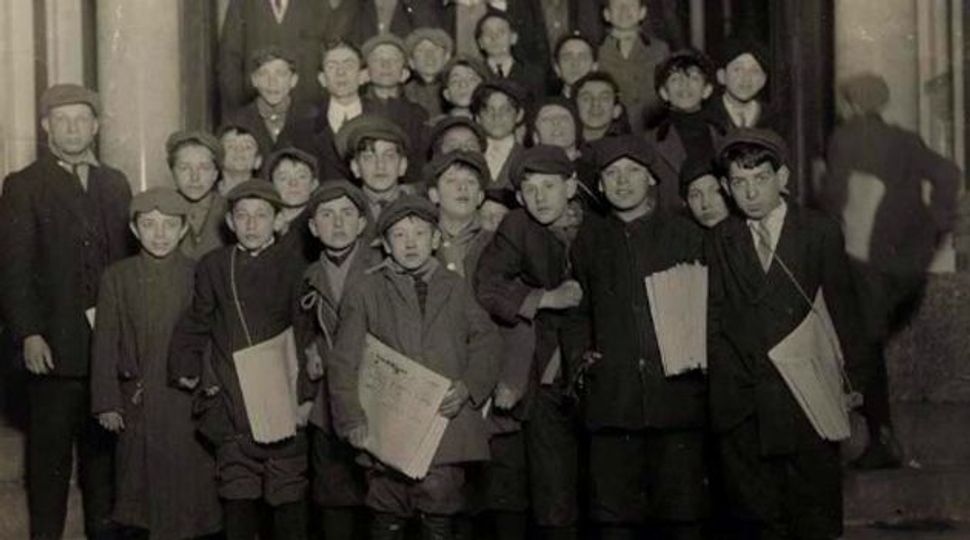 100 Years Ago: Newsboys gather on the Lower East Side to pick up copies of the Forward. Image by Lewis Hine/Wikimedia Commons

Eighteen-year-old Esther Goldberg, a pretty girl who lives at 20 Pitt Street on Manhattan’s Lower East Side, went out early in the morning to the grocery store to get some rolls for breakfast. Suddenly she saw her neighbor, a young tailor by the name of Harris Bloom, being attacked by a thief as he was coming home from a dance. The thief popped Bloom on the head so hard, he couldn’t see straight. Then the thief grabbed Bloom’s money and took off. Goldberg, a Cossack of a girl, gave chase. She caught up with the thief on Grand Street and punched him so hard that he fell down. With that, she jumped on top of him and pounded him with her fists until he saw stars. The robber was saved only because the police showed up.

Thieves broke into the Lower East Side synagogue at 12 Eldridge Street and stole a Torah scroll and a number of ceremonial objects, such as lamps and spice boxes. They also emptied all the charity boxes in the synagogue, which belongs to Congregation Kahal Adath Yeshurun. The synagogue’s janitor, Tony Columbo, discovered the break-in and notified the board immediately. It is not clear why the thieves took a Torah scroll, since it is extremely difficult to sell one with dubious origins, and most synagogues will not buy one from someone they don’t know. The police have not found any fingerprints on the objects that were obviously handled by the robbers; it appears that the perpetrators wore gloves.

Israel complained to the United Nations that Syria has recently broken the cease-fire agreement between the two countries and has strengthened its troops along the Israeli-Syrian border. On more than one occasion, Israeli fisherman working in the Sea of Galilee have been shot at by Syrian troops who look down upon them from the Golan Heights. Israeli officials in Jerusalem discussed the issue with local U.N. officials, asking them to appeal to the new Syrian regime to stop the provocations on the border, as they could result in military or political repercussions. In the meantime, Syrian premier Salah al-Bitar was in Cairo for a meeting with Egyptian strongman Gamal Abdel Nasser to discuss the possibility of uniting the two countries into one political entity.