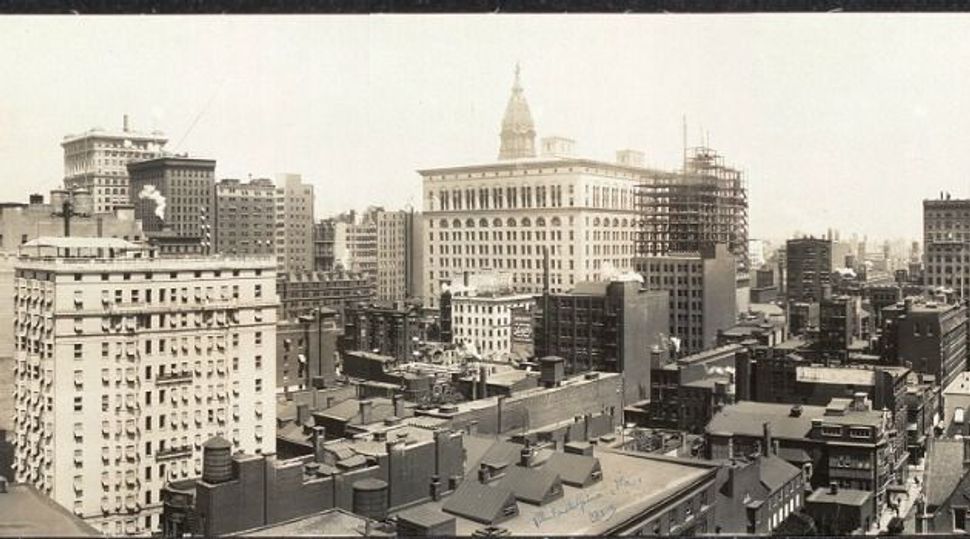 100 Years Ago: In 1913, Philadelphia was the scene of a crime against a Jewish peddler named Jacob Wine. Image by Wikimedia Commons

West Philadelphia peddler Jacob Wine was accosted by one Thomas White, who, in the company of two women, claimed that Wine’s long beard was ugly and not fit for public viewing. White attacked the 60-year-old peddler and began to tear out his beard. One of his lady friends, unable to tolerate Wine’s screams of pain, gave White scissors to cut off the rest of the beard, which he did. White was arrested and as the result of the jury trial the attacker was forced to pay Wine the tidy sum of $300. Wine said he didn’t really care about the money; he just wanted to be sure that people like White would think twice before attacking others.

Thousands of Jews have camped out in front of the American and British consulates in Vienna, hoping to escape the Nazi hell. The need for Jews to get out of the city seems especially urgent, considering the statement made by Nazi Minister Hermann Goering that Vienna will be Aryanized very quickly, and mercilessly so. Jews camped out in long lines in front of both consulates, even though the possibility for them to emigrate has been officially suspended until the April 10 Nazi plebiscite. The British Embassy is permitting 100 Jews at a time to enter the embassy, where they must fill out forms and are given information on the possibility of immigrating to any country within the British Empire.

London’s Daily Telegraph has reported that eight Jews were arrested in Moscow for baking matzo in their homes, according to sources in the British Jewish community. The report indicated that Moscow police also confiscated the machinery used for baking and cutting the matzo and that the arrested Jews were charged with “illegal manufacture of foodstuffs and speculation.” The arrests were reported to have caused widespread concern among Moscow’s Jewish population. Just 10 days ago, ironically, Moscow’s chief rabbi, Yehuda Levine, announced to the community that state bakeries would not be baking matzo this year; he advised Jews to bake matzo in their homes.