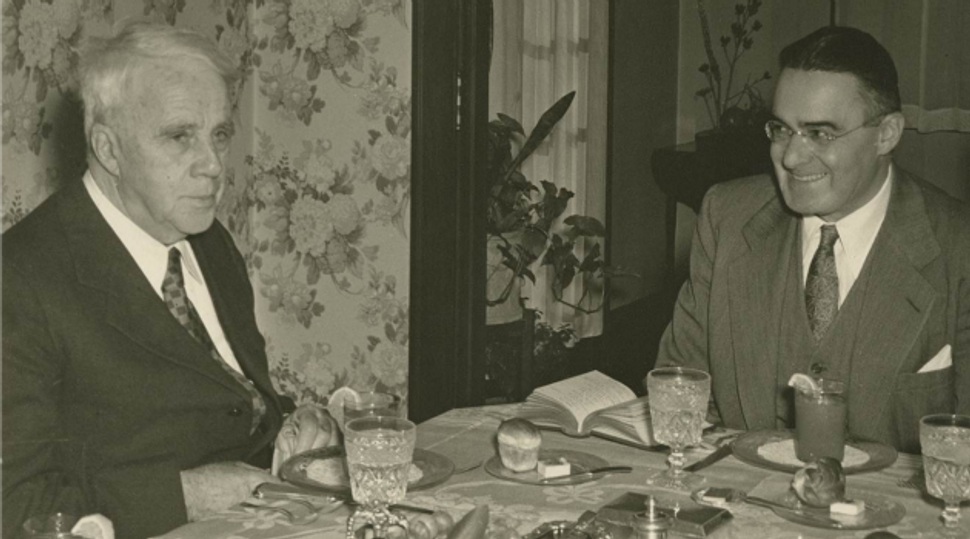 Promises To Keep: For more than two decades, Rabbi Victor Reichert (right) maintained a friendship with Robert Frost. Image by Courtesy of the Poetry Collection of the University Libraries

Although Robert Frost rarely attended church, America’s supreme poet of pastoral life had his own personal rabbi. Victor Reichert, rabbi of the Rockdale Avenue Temple, in Cincinnati, was one of Frost’s closest friends and confidants in the final decades of the poet’s life.

Now, Reichert’s son, Jonathan Reichert, has donated his father’s trove of letters, books and newspaper clippings documenting the 24-year friendship to the University at Buffalo’s poetry collection. Accessible to the public for the first time, the materials provide insight into Frost’s hard-to-pin-down sensibilities about religion and spirituality, and chronicle a chance friendship that influenced Frost’s later work.

“My father’s interaction with Frost is a tiny part of American literary history, and it deserves a place where it will be recognized,” said Reichert, professor emeritus of physics at U.B., and a friend and admirer of Frost himself.

Frost and Victor Reichert met in 1939 when Louise Reichert convinced her husband to see Frost speak at the Gibson Hotel in downtown Cincinnati. The rabbi, devoted to the writer Edwin Arlington Robinson, felt he didn’t need another poet to follow. But Louise Reichert, a fan of Frost since her days at Smith College, prevailed. Sitting in the front row at the reading, the rabbi was instantly rapt; afterward, he asked Frost to accompany him on a car ride through Eden Park. “It was a blending of the minds, a soul mates’ meeting,” said Michael Basinski, curator of the poetry collection at U.B.

Soon after their initial meeting, Frost invited Reichert to visit him at a writers conference in August in Vermont, where he lived. From then on, Reichert would all but close down his synagogue every summer to sojourn with his family in Frost’s tiny town of Ripton. Reichert became an integral part of “Frost’s posse” of writers and critics, Basinski said. He accompanied Frost on his famously long walks through the woods, and the two men talked about religion, poetry and philosophy. Reichert soon became a fixture in Ripton, giving regular sermons at the local Methodist church. Many years later, he officiated a double bat mitzvah in the church for his wife and granddaughter.

Reichert was a well-respected Reform rabbi in Cincinnati, known for his interfaith work with the Christian community, but he wasn’t a national religious figure. The son of a poor rabbi whose itinerant career took him to synagogues around the country, Reichert never saw himself as part of the American Jewish establishment. His interests went far beyond Jewish texts; he was conversant in Latin, Greek, Hebrew, Aramaic, German and Italian, his son said. He wrote poetry — ranging in subject from the Western Wall, to New York City, to Abraham Lincoln — and translated medieval Hebrew works.

“Victor Reichert brought his wide knowledge of philosophy to bear on his Jewish studies, and he understood that Judaism is a hugely ethical religion, a worldly religion,” said Jay Parini, Middlebury College professor of creative writing and author of the 1999 book “Robert Frost: A Life.” Reichert’s grounded view of religion likely made him an appealing companion to Frost, who rebuked the idea of a better, heavenly existence in his well-known 1915 poem “Birches”: “Earth’s the right place for love: I don’t know where it’s likely to go better.” “The idea of earth as the right place for love, I felt that was something that you would have gotten from Victor Reichert,” Parini said.

In his friendship with the rabbi, Frost discovered “a way to see into biblical literature and Jewish thought,” Jonathan Reichert said. Frost’s own faith background was muddled: His father was a religious skeptic, and his mother a follower of the mystic Emanuel Swedenborg. In his adult life, Frost was not much of a churchgoer, but he nevertheless called himself an “Old Testament Christian”; he was drawn to the Hebrew Bible’s depiction of a harsh god, Parini said.

Frost relied on Reichert to decipher certain aspects of the Torah. In a handwritten letter to Reichert, on display at U.B., Frost asks the rabbi about the concept of sacrifice in the Bible. Reichert drafted several letters in response, also on display, though it’s unclear which, if any, he sent the poet. According to Jonathan Reichert, Frost consulted with his father before the publication of his 1945 play “A Masque of Reason,” about a conversation between Job and God. Reichert apparently suggested the last line, “Here endeth Chapter Forty-three of Job,” a twist on the fact that the Book of Job has just 42 chapters. “My sense was that Frost wanted to get it right,” Jonathan Reichert said. “They talked long and carefully about this poem. As I remember it, Frost said, ‘Victor, you gave me the green light.’”

Frost returned the favor in 1946 by speaking at Reichert’s synagogue when he took a trip to Cincinnati for a reading. His sermon, which began with warm remarks toward Reichert, marked the Feast of Tabernacles, or Sukkot. Reichert recorded Frost’s talk, transcribed it and printed 500 copies, with the intention of sending it to friends, congregants and interested readers. But Frost feared that some of the real-world people he described in the talk would take offense at what he said, so he asked Reichert to hold off. After Frost’s death, in 1963, Reichert distributed it.

Over their 24-year relationship, Reichert was more than Frost’s friend — he was also his enthusiast. Reichert saved more than 600 magazine and newspaper articles about Frost, and amassed a collection of books and chapbooks that the poet inscribed to Reichert and his family. In 1960, Reichert was instrumental in getting his alma mater, Hebrew Union College-Jewish Institute of Religion, to award Frost an honorary doctorate.

Reichert also wrote, often fawningly, about the poet. “He almost worshipped him,” his son said. He viewed Frost in the “prophetic tradition,” as though “he had met Isaiah or Jeremiah.” Jonathan Reichert occasionally edited his father’s articles on Frost, and warned him against “hero worship.”

“You’re making a wooden figure out of this man,” he told his father. “He’s a living, flesh-and-blood person.”

Victor Reichert seemed to take personal offense at Frost’s critics. Lawrance Thompson’s skewering three-volume biography of Frost, published between 1966 and ’76, hit the rabbi harder than Frost’s own death, his son said. In order to restore Frost’s name, Reichert agreed to be interviewed for Andrew R. Marks’s book “The Rabbi and the Poet,” published in 1994, four years after Reichert’s death, by Andover Green Book Publishers.

Jonathan Reichert had his own relationship with Frost. During his summers in Vermont, he would bring the poet freshly caught trout — with the heads still on, as Frost preferred — in order to bribe his way past his secretary and gatekeeper, Kay Morrison. Reichert occasionally had lively debates with the poet about the role of science in society. “Frost talked 98% of the time, but of the 2%, I got 1,” he said. Now 81, Reichert recites Frost poems by memory.

Jonathan Reichert hopes that the new archive will shed light on his father’s “small but not insignificant” influence on Frost. A great lover of libraries, Victor Reichert would have been “thrilled” about the collection; but to him, Frost’s legacy was his poetry more than his relationships. “Dad would say over and over to me, ‘It’s the poems that matter,” Reichert said. “‘It’s the poems. That’s what will last.’”

Naomi Zeveloff is the deputy culture editor of the Forward.