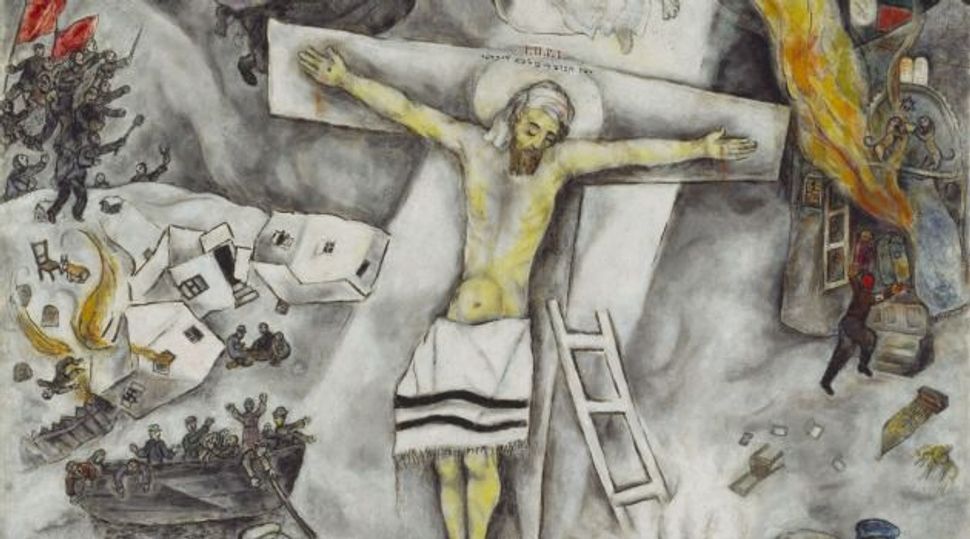 Papal Favorite: Marc Chagall?s ?White Crucifixion? depicts Jesus, wearing a tallit instead of a loincloth. Image by Courtesy of The Art Institute of Chicago

Gallery 395A is tucked away in a corner on the third floor of the Art Institute of Chicago’s modern wing. After passing works by Joan Miró, Alberto Giacometti and Salvador Dalí, viewers enter Gallery 395, which features a glass wall overlooking Lake Michigan and is packed with Constantin Brâncusi, Alberto Giacometti and Henry Moore sculptures. Turning a corner, one is confronted by a nook, which contains a Max Beckmann self-portrait, Georges Braque’s “Woman at an Easel (Green Screen)” and Marc Chagall’s “White Crucifixion” (1938).

Despite its inauspicious presentation, the Chagall painting has been making international news. In interviews with Francesca Ambrogetti and Sergio Rubin for the 2010 biography “El Jesuita,” Pope Francis identified “White Crucifixion,” which depicts a Jewish Jesus, wearing a tallit instead of a loincloth, as his favorite work of art. “He likes us, he really does,” Tweeted Miriam Shaviv, a columnist for Britain’s Jewish Chronicle, about the pope.

But there’s more to the painting than “owning” Jesus as a Jew. Surrounding Jesus, we see a synagogue, a Torah scroll and a shtetl burning, as armed men march carrying red flags. And in the bottom-right corner, the Wandering Jew, donning a blue cap and a green coat, lugs a sack as he trudges past the smoking Torah.

That the chief executive of the Catholic Church has an affinity for a painting that was created by a Russian Jewish artist and also includes the symbol of the eternal wanderer, who was punished for abusing Jesus and became the pretext for centuries of anti-Semitism, is drawing a range of reactions.

“Chagall is a common preference of viewers who are not interested in the art world,” said James Elkins, professor of art history at the School of the Art Institute of Chicago.

Without evidence that the pope has an extensive interest in visual art, it’s likely that his preference for Chagall has something in common with others’ affinity for the works of Georges Rouault, Henri Matisse of the Vence Chapel and Maurice Denis, according to Elkins, author of “On the Strange Place of Religion in Contemporary Art” (Routledge, 2004). “They are among the rare exceptions to the general rule that modern and contemporary art are disengaged from the church,” he said.

“I know nothing of the pope’s taste, so I have no idea why he likes that painting,” said Matthew Baigell, who is professor emeritus of art history at Rutgers University and has published extensively on Jewish artists. Marc Michael Epstein, professor of religion at Vassar College, in Poughkeepsie, N.Y., sees things differently. The notion of a Jewish Jesus and its reference to Jews and other marginalized groups is very appealing post-Vatican II, he said.

The painting is more about Russian history, Epstein added, but the pope’s embrace of “White Crucifixion” may signal “an identification with the suffering Jewish Jesus, which is interesting.”

“The choice of a favorite painting is always personal,” said Jonathan Canning, senior curator at the Loyola museum. Canning declined to comment specifically on the pope’s aesthetic preferences.

Menachem Wecker is a Chicago-based writer on art and religion. Find out more about him at menachemwecker.com or on Twitter @mwecker