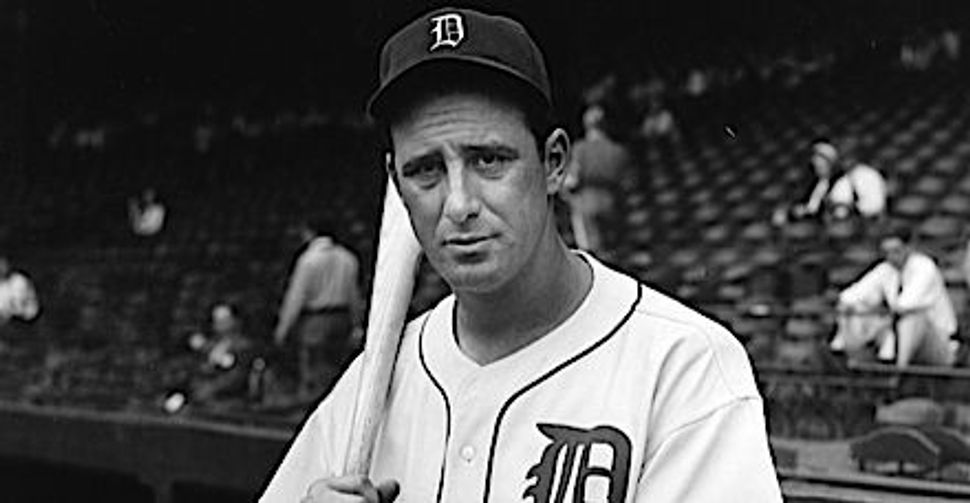 Ford Tough: Among the surprising facts unearthed about Hank Greenberg was that he worked as an investigator for Henry Ford. Image by getty images

On October 6, 1965, Sandy Koufax sat out the first game of the World Series in observance of Yom Kippur. By putting the holiest day of his faith before the most important event of the most popular sport in America, the best pitcher of his era cemented his status as an American Jewish icon. Nearly 50 years later, Koufax’s decision to spend the Day of Atonement in a synagogue rather than on the mound remains a compelling cultural touchstone for American Jews — even ones who don’t follow baseball — and an inspiring example of Jewish pride.

But with all due respect to “The Left Arm of God,” Koufax’s Game One opt-out was pretty much chopped liver compared with the conundrum that Hank Greenberg faced on Rosh Hashanah in 1934. When Koufax sat out Game One of the World Series, he did so with the full support and acceptance of his teammates, as well as with that of the majority of his fans. Koufax had the good fortune to pitch in a city and era where both Judaism and expressions of personal freedom were at least, if not always fully understood, generally accepted by the cultural mainstream. Koufax was also a fully established superstar; with four no-hitters, three pitching Triple Crowns, two previous World Series victories and numerous awards and trophies already to his credit by October 1965, his skill, fortitude and personal makeup were all well beyond reproach.

Hank Greenberg had no such support or reputation to fall back on. In September 1934, The Detroit Tigers — who hadn’t been to a World Series since 1909 — were desperately trying to hold off the New York Yankees in the American League pennant race, and Greenberg’s was one of the most consistently productive bats in the Tigers’ lineup. The big first baseman was playing in just his second full season as a major leaguer; though already an immensely popular player in Detroit, he’d yet to stockpile the sort of achievements and accumulated goodwill that would allow him any sort of personal latitude in terms of putting his faith before baseball.

His teammates, the Detroit media and the majority of the team’s fans were all insistent that Greenberg play baseball on Rosh Hashanah; to do otherwise would be seen as nothing less than a dereliction of duty.

But as John Rosengren recounts in his new book, “Hank Greenberg: The Hero of Heroes,” Greenberg’s Rosh Hashanah conflict was more complex than just a personal matter of faith versus sport.

In truth, Greenberg himself was not particularly observant; though he’d promised his Orthodox parents — immigrants from Romania who had settled in New York — that he would not play on the High Holy Days, it was a pledge borne more out of respect for their Old World values than out of any heartfelt religious convictions of his own. Weighing far more heavily on him were the hopes and expectations of Detroit’s Jewish community and, indeed, of Jews across the country.

There had been Jewish ballplayers before Greenberg, but none as physically imposing or immensely talented as the 6 foot 4, 210-pound first baseman; and while Hank sought to prove himself as simply a great ballplayer, Jewish newspapers had already begun hailing him as “that elusive Hebrew star,” a symbol of hope and pride in dark times.

Times were dire indeed for Jews in 1934, and not just in Germany, where Hitler’s propaganda machine was already running full bore. Anti-Semitism was also rampant in America, especially in Detroit, home of two of the country’s most influential bigots: Catholic priest Father Charles Coughlin, who railed against “Jewish conspirators” and “moneychangers” on his weekly radio show, and automotive mogul Henry Ford, who’d published several anti-Semitic tracts over the previous decade, including one about “The Jewish Degradation of American Baseball.”

In this poisonous atmosphere, every move Greenberg made took on a greater significance. Like it or not, Rosengren writes, he “was starting to understand that others — Jews and non-Jews alike — looked to him not simply as a Jew but representative of many. His actions had greater consequences beyond himself. He did not want to let his people down.”

In the end, Greenberg didn’t let down his people or his teammates, thanks to a talmudic loophole that allowed him to spend the first morning of the new year in prayer at Detroit’s largest Conservative synagogue, then spend the afternoon playing baseball at Navin Field, where he hit two home runs — including a dramatic ninth-inning walk-off — in the Tigers’ 2–1 victory over the Red Sox.

But the inner turmoil Greenberg experienced that day (and the self-doubt that plagued him afterward) would set the tone for much of his career, in which the reluctant hero often struggled in equal measure with anti-Semitism and the demands of his Jewish fan base.

Rosengren’s superbly researched biography is easily the most comprehensive book ever written about the first Jewish player to be inducted into the Hall of Fame, and it nimbly separates fact from the many fictions and half-truths that have long surrounded the subject. From Greenberg’s days as a homesick minor leaguer through his rise to superstardom with the Tigers, his four-year stint in the U.S. Army Air Forces, his postwar comeback, and his tumultuous second career as a general manager and part-owner of the Cleveland Indians and, later, the Chicago White Sox (legendary baseball promoter Bill Veeck was his partner in both teams), Rosengren does a fine job of chronicling the triumphs, frustrations and controversies that studded his life and career. He also paints a vivid picture of the virulent prejudice that Jews faced in America of the 1930s, and illustrates how the handsome, heroic Greenberg almost single-handedly upended the popular stereotyping of Jews as cowardly weaklings and avaricious shylocks — and how he helped an entire generation of Jews assimilate into American life.

Still, the man himself remains elusive. Other than some occasional tension over his star status (or his high salary, or his Jewishness), Rosengren doesn’t give us much insight into Greenberg’s relationships with his teammates and fellow players, though he and Ted Williams do seem to have formed a friendship over their love of hitting. And for a player who bore the whimsical nickname Hankus Spankus, Greenberg mostly comes off here as introverted, hypersensitive and hot-tempered, though there are brief moments in the narrative — like the time in basic training where he’s caught speeding by police an hour and a half after his superior officer had checked him into bed — when a lustier, more fun-loving Hank peeks through.

That said, “Hank Greenberg: The Hero of Heroes” is no hagiography, a la Jane Leavy’s “Sandy Koufax: A Lefty’s Legacy.” Rosengren doesn’t shy away from chronicling some of Greenberg’s less immaculate moments, like moodily refusing to sign autographs for young fans, accidentally breaking the arm of a girl he’s bedding, or (more ominously) working one off-season for Henry Ford, of all people, as a “special investigator” whose duties may have included spying on union supporters in Ford’s company. But while these fleeting glimpses of a more complex man behind the furrowed brow and bulging muscles pass by all too quickly, Rosengren ultimately makes a persuasive case for Greenberg’s greatness, both as a ballplayer and as a Jewish icon — the “hero of heroes.”

Dan Epstein is the author of “Big Hair and Plastic Grass: A Funky Ride Through Baseball and America in the Swinging 70s” (Thomas Dunne Books, 2010).