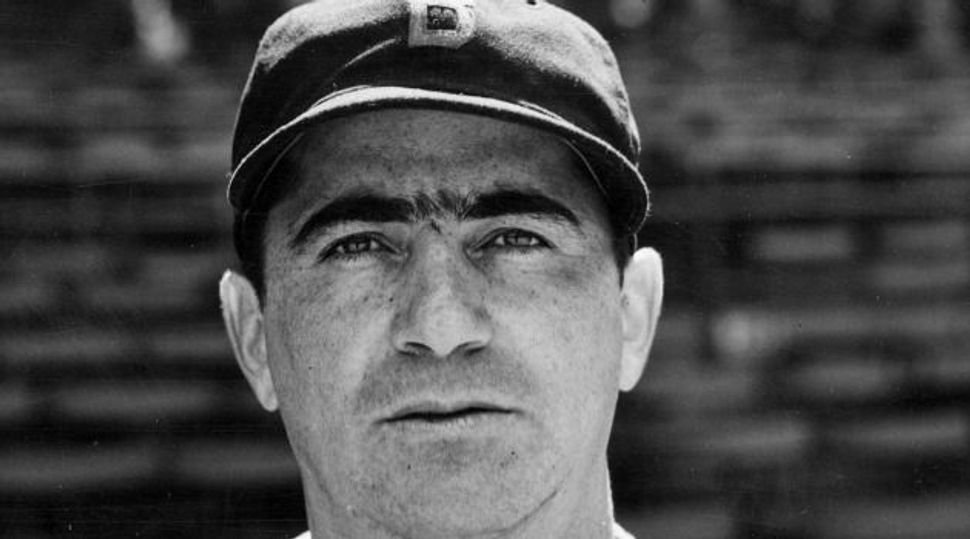 The Catcher Was A Jew: Moe Berg, immortalized in Nicholas Dawidoff?s book ?The Catcher Was A Spy,? is one of many Jewish players found in Larry Ruttman?s new book. Image by Courtesy of the National Baseball Hall of Fame Library

Known as the “Iron Batter,” Lipman Pike was one of the earliest baseball stars. Playing for the Philadelphia Athletics in the 1860s, Pike was a power hitter at a time when home runs were rare. And he was one of the first paid players — $20 a week. He is also widely noted as the first prominent player from a Jewish background.

Pelty was not an overwhelming presence on the mound, but he was particularly skilled at locating his pitches. “I think a brain goes a long way,” baseball historian Larry Ruttman said.

Ruttman, a Boston lawyer, is celebrating the publication of his second book, “American Jews & America’s Game: Voices of a Growing Legacy in Baseball.” He, too, is pitching to spots — specifically, the place where American Judaism meets the national pastime.

Yes, the book is about Koufax, Hank Greenberg and Al Rosen, the great players who have been featured in other books on the subject as well as in the 2010 documentary “Jews and Baseball: An American Love Story.” But it’s also about those who, though they never played professionally, have been emblematic of the Jewish community’s longtime affinity for the great American game.

Among Ruttman’s subjects are the late Marvin Miller, whose commitment to justice as a union organizer led to free agency, making him perhaps the most influential nonplayer of all time; Roger Kahn, author of the classic Brooklyn Dodgers reminiscence “The Boys of Summer,” and Marty Abramowitz, who created a line of baseball cards devoted to Jewish major leaguers.

That ampersand, Ruttman said, is the key to the book’s title. If the book were called “American Jews in America’s Game,” he notes, he would have been limited to the few hundred players and executives who identified as Jewish. (By his count, there are presently 17 Jewish major leaguers, including Kevin Youkilis and Ian Kinsler.)

“But if it’s ‘and,’ the book is about two subjects, and it’s 6 million people,” Ruttman explained, sitting in his second-floor office above a row of shops and restaurants in his hometown of Brookline, just outside Boston. “It’s not really a sports book — well, it is a sports book, but it’s also an oral history of a group of people in America among many other groups.”

Ruttman, who doesn’t think of himself as a very observant Jew, says he found as many different approaches to Judaism as he had interview subjects — 50 or so.

“Judaism allows that,” he said. “It’s a big tent.” One chapter features an Orthodox rabbi, Michael Paley, who believes that Greenberg, the beloved Hall of Fame slugger, may have been “the most important Jew who ever lived in America.” Another focuses on Elliott Maddox, the African-American former Yankee who converted to Judaism at age 26.

The framed pictures in Ruttman’s tidy office include an enlarged snapshot he once took of Leonard Bernstein conducting at Boston’s Symphony Hall, and a copy of an original deed to Boston, dated 1701 and beginning with the words “To all Christian people.”

The author’s first book, “Voices of Brookline” (Peter E. Randall Publisher, 2005), earned praise from the late Howard Zinn as a model of community oral history. As Ruttman was conceiving “American Jews & America’s Game,” he sent a note to the author and activist, asking whether he thought it was a good idea.

“I think you’re on to something,” Zinn replied.

“Coming from Howard Zinn,” said Ruttman, a spry, good-humored 81-year-old, “I figured, well, maybe I’m on to something.”

Ruttman’s late-blooming career as a baseball historian might be traced back to his youth, when he and his stickball-playing friends would hop the turnstiles at the old Braves Field, just a few blocks from Ruttman’s childhood home, to watch Warren Spahn, Johnny Sain and the rest of the then-Boston Braves play. When a 12–year-old Ruttman slipped into the press box during a game, the cigar-chomping sportswriters praised his gumption.

“They bought me a ham and cheese sandwich,” Ruttman recalled with a grin. “That taught me, if you want to go someplace, just try to go.”

His book got off to a ringing start when he befriended Marty Appel, a former Yankees public relations man who has written plenty of books of his own. Appel suggested that Ruttman travel to Israel during the inaugural season of the Israel Baseball League in 2007. On his first day there, he came downstairs from his room and sat down to breakfast with former major leaguers Art Shamsky, Ken Holtzman and Ron Blomberg, all of whom were managing in the league.

Though the IBL disbanded after a single season, it helped to establish a strong baseball program in Israel. Ruttman was in Jupiter, Fla., last fall when the Israeli national team, a favorite entering this year’s World Baseball Classic, was eliminated in the qualifying round. Since the games were played in September, eligible Jewish big leaguers, including Youkilis, Kinsler, Ryan Braun and others, were unable to play.

The idea for the book, Ruttman said, was to go beyond the baseball statistics and get to know a little more about the players’ lives and how their Judaism fit in. Waving a hand toward the window, he notes proudly that Youkilis, while a member of the Red Sox, attended the same nearby synagogue where Ruttman had his bar mitzvah.

“I knew I wanted to write about how these people came to be the people they were,” Ruttman said.

So he spoke with childhood Dodgers fan Alan Dershowitz, who claims he became more religious after tricking his Orthodox, baseball-averse rabbi into blessing Jackie Robinson: Robinson got a hit the next day. And the author tracked down the adult children of Greenberg, who was raised Orthodox but did not observe with his own family. The ballplayer, who was sometimes called the “Hebrew Hammer,” once kept his sons home from school on Yom Kippur, as the sons themselves say, telling them they were going someplace special. It turned out to be the planetarium.

To another one of Ruttman’s subjects, Howard Goldstein, a Philadelphia lawyer who collects Jewish baseball memorabilia, Greenberg’s individualized relationship with his religion makes perfect sense. “Yes, you should want to assimilate,” Goldstein told Ruttman, “but there are great things in everybody’s heritage, no matter who you are, and you should try to maintain that balance.”

There are plenty of reasons that Jews have been drawn to the game, the author writes. It’s analytical; it requires strategy and perseverance.

Perhaps most of all, he agrees with Goldstein, who points out that rooting for the home team is a tribal instinct.

“We spent 40 years marching through the desert,” Ruttman said. “We want to be part of a team.”

James Sullivan is the author of several books, a contributing editor for Rolling Stone and a regular contributor to the Boston Globe.